The Greatest Prophets between Christianity and Islam: 19-Prophet Zechariah 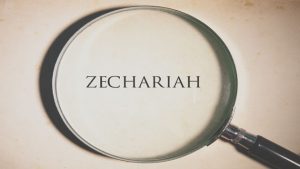 Prophet Zechariah was the father of Prophet John (Yahya) and the uncle-in-law (husband of the maternal aunt) of Mary or Jesus.

Prophet Zechariah and his son John are the key to the sound knowledge of Jesus in the light of both the Bible and the Qur’an.

While Prophet Zechariah’s character is the same everywhere in the Qur’an, there are numerous historical characters named “Zechariah” in the Bible.

There are so many persons named “Zechariah” in the Bible, especially the Old Testament. It seems that the name “Zechariah” was very common among the children of Israel so much so that there were a lot of people carrying this name, including Zechariah, the father of John, the Baptist.

It is curious that Zechariah, the father of John the Baptist, was not a prophet according to the Bible. Rather, he was just a priest of Abijah’s division.

Anyway, the Bible honors and praises Zechariah and his wife, Elizabeth who are described as “righteous”. In the Bible, we read:

“In the days of King Herod of Judea, there was a priest of Abijah’s division named Zechariah. His wife was from the daughters of Aaron, and her name was Elizabeth. Both were righteous in God’s sight, living without blame according to all the commands and requirements of the Lord.” (Luke 1:5-6)

The Qur’an honors and praises Zechariah. It tells us that he was one of the righteous. We read:

And Zechariah and John and Jesus and Elias. Each one (of them) was of the righteous. (Al-An`am 6:85)

The Qur’an also praises and describes Zechariah and his wife as “hastening to good deeds” and “supplicating and submitting to God”. We read:

And [mention] Zechariah, when he called to his Lord, “My Lord, do not leave me alone [with no heir], while you are the best of inheritors.” So We responded to him, and We gave to him John, and amended for him his wife. Indeed, they used to hasten to good deeds and supplicate Us in hope and fear, and they were to Us humbly submissive. (Al-Anbiyaa’ 21:89-90)

Relationship between Zechariah, Mary and Jesus

About the kinship relationship between Mary and Elizabeth and the same way in which they conceived, we read in the Bible:

About Mary’s stay at Zechariah’s house, we read in the Bible: In those days Mary set out and hurried to a town in the hill country of Judah where she entered Zechariah’s house and greeted Elizabeth. When Elizabeth heard Mary’s greeting, the baby leaped inside her, and Elizabeth was filled with the Holy Spirit. Then she exclaimed with a loud cry: “Blessed are you among women, and your child will be blessed! How could this happen to me, that the mother of my Lord should come to me? For you see, when the sound of your greeting reached my ears, the baby leaped for joy inside me. Blessed is she who has believed that the Lord would fulfill what he has spoken to her!” And Mary said: My soul praises the greatness of the Lord … And Mary stayed with her about three months; then she returned to her home. (Luke 1:39-56)

As for the kinship relationship, in the hadith on Israa’ and Miraj, John the Baptist and Jesus were referred to as cousins (children of maternal aunts) no matter if they were first or second cousins. Malik ibn Sa`sa`h quoted Prophet Muhammad as saying:

As for the same way the two women conceived and the silence ordered in both cases, about Zechariah, we read in the Qur’an:

At that, Zechariah called upon his Lord, saying, “My Lord, grant me from Yourself a good offspring. Indeed, You are the Hearer of supplication.” So the angels called him while he was standing in prayer in the chamber, “Indeed, Allah gives you good tidings of John, confirming a word from Allah and [who will be] honorable, abstaining [from women], and a prophet from among the righteous.” He said, “My Lord, how will I have a boy when I have reached old age and my wife is barren?” The angel said, “Such is Allah ; He does what He wills.” He said, “My Lord, make for me a sign.” He Said, “Your sign is that you will not [be able to] speak to the people for three days except by gesture. And remember your Lord much and exalt [Him with praise] in the evening and the morning.” (Aal `Imran 3:38-41)

About Mary, we read:

And shake toward you the trunk of the palm tree; it will drop upon you ripe, fresh dates. So eat and drink and be contented. And if you see from among humanity anyone, say, ‘Indeed, I have vowed to the Most Merciful abstention, so I will not speak today to [any] man.’ ” Then she brought him to her people, carrying him. They said, “O Mary, you have certainly done a thing unprecedented. O sister of Aaron, your father was not a man of evil, nor was your mother unchaste.” So she pointed to him. They said, “How can we speak to one who is in the cradle a child?” [Jesus] said, “Indeed, I am the servant of Allah . He has given me the Scripture and made me a prophet. (Mary 19:25-30)

There are dissimilarities in the relationship between Zechariah on the one hand and Mary as well as her son Jesus on the other hand in the Bible and the Qur’an.

The most important dissimilarity is that while Mary and Elizabeth, Zechariah’s wife, conceived in the same way in terms of the appearance of an angel and extraordinary conception, the Bible considers Jesus a physical son of God but John the Baptist a son of Zechariah.

As a matter of fact, John the Baptist was the son of Zechariah and Elizabeth, whereas Jesus was the son of Mary only through God’s exceptional might. Both were holy prophets without discrimination in this regard.

About the prophethood of John the Baptist, in the Bible, Prophet Zechariah is quoted as saying: “And you, child, will be called a prophet of the Most High, for you will go before the Lord to prepare his ways.” (Luke 1:76)

Click here to read Prophet Yahya’s story for it is an integral part of Prophet Zechariah’s story!