The Greatest Prophets between Christianity and Islam: 18-Prophet Solomon 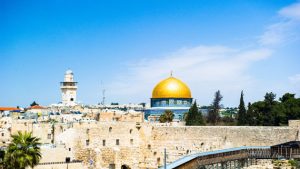 However, Prophet Solomon’s biography in the Bible involves things not beseeming him as one of the greatest prophets as well as refutations of many suspicions that are aroused about Prophet Muhammad.

Let’s know more about Prophet Solomon’s character in Christianity and Islam according to the Bible and the Qur’an. It is recommended to have a look at Prophet David’s story as well, for it is an integral part of Prophet Solomon’s story.

In the Bible, Christianity honors and praises Prophet Solomon. For example, the Old Testament tells us that God loved him. We read: “Then David comforted his wife Bathsheba, and he went to her and made love to her. She gave birth to a son, and they named him Solomon. The Lord loved him” (2 Samuel 12:24)

The Bible also tells us that God gave Solomon wisdom, insight, discernment as well as unprecedented wealth and honor. We read: “I will do what you have asked. I will give you a wise and discerning heart, so that there will never have been anyone like you, nor will there ever be. Moreover, I will give you what you have not asked for—both wealth and honor—so that in your lifetime you will have no equal among kings.” (1 Kings 3:12-13)

We also read: “God gave Solomon wisdom and very great insight, and a breadth of understanding as measureless as the sand on the seashore. Solomon’s wisdom was greater than the wisdom of all the people of the East, and greater than all the wisdom of Egypt. He was wiser than anyone else, including Ethan the Ezrahite—wiser than Heman, Kalkol and Darda, the sons of Mahol. And his fame spread to all the surrounding nations. He spoke three thousand proverbs and his songs numbered a thousand and five. He spoke about plant life, from the cedar of Lebanon to the hyssop that grows out of walls. He also spoke about animals and birds, reptiles and fish. From all nations people came to listen to Solomon’s wisdom, sent by all the kings of the world, who had heard of his wisdom.” (1 Kings 4:29-34)

We bestowed the same favour upon David and Solomon. Recall, when they gave judgement regarding a tillage into which the sheep of some people had strayed at night, and We were witnesses to their judgement. We guided Solomon to the right verdict, and We had granted each of them judgement and knowledge. We made the mountains and the birds celebrate the praise of Allah with David. It was We Who did all this. It was We Who taught him the art of making coats of mail for your benefit so that it may protect you from each other’s violence. Do you, then, give thanks? And We subdued the strongly raging wind to Solomon which blew at his bidding towards the land We blessed. We know everything. And We subdued many devils who dived (into the sea) for him and carried out other jobs besides that. We kept watch over all of them. (Al-Anbiyaa’ 21:78-82)

And We had certainly given to David and Solomon knowledge, and they said, “Praise [is due] to Allah, who has favored us over many of His believing servants.” And Solomon inherited David. He said, “O people, we have been taught the language of birds, and we have been given from all things. Indeed, this is evident bounty.” (An-Naml 27:15-16)

And to David We gave Solomon. An excellent servant, indeed he was one repeatedly turning back [to Allah]. [Mention] when there were exhibited before him in the afternoon the poised [standing] racehorses. And he said, “Indeed, I gave preference to the love of good [things] over the remembrance of my Lord until the sun disappeared into the curtain [of darkness].” [He said], “Return them to me,” and set about striking [their] legs and necks. And We certainly tried Solomon and placed on his throne a body; then he returned. He said, “My Lord, forgive me and grant me a kingdom such as will not belong to anyone after me. Indeed, You are the Bestower.” So We subjected to him the wind blowing by his command, gently, wherever he directed, And [also] the devils [of jinn] – every builder and diver And others bound together in shackles. [We said], “This is Our gift, so grant or withhold without account.” And indeed, for him is nearness to Us and a good place of return. (Saad 38:30-40)

About the subjection of wind and flowing of springs of liquid copper for Prophet Solomon, we read:

And to Solomon [We subjected] the wind – its morning [journey was that of] a month – and its afternoon [journey was that of] a month, and We made flow for him a spring of [liquid] copper. And among the jinn were those who worked for him by the permission of his Lord. And whoever deviated among them from Our command – We will make him taste of the punishment of the Blaze. They made for him what he willed of elevated chambers, statues, bowls like reservoirs, and stationary kettles. [We said], “Work, O family of David, in gratitude.” And few of My servants are grateful. (Saba’ 34:12-13)

Despite the stated honor and praise of Prophet Solomon by the Bible, it portrays Solomon’s character in such a way which does not befit Solomon as one of the greatest prophets but, in the same time, involves refutations of many suspicions aroused about Prophet Muhammad like violence, concubinage and polygamy.

The Bible tells us that Prophet Solomon killed his older brother, Adonijah, as well as Joab the son of Zeruiah, the commander of the army, and Shimei who was one of King David’s men in order to establish the royal power in his hand.

About Adonijah’s killing, we read: “And now, as the Lord lives, who has established me and set me on the throne of David my father and made for me a house as he promised, this day shall Adonijah be put to death.” Then King Solomon sent Benaiah, son of Jehoiada, who struck him dead. (1 Kings 2:24-25)

About Shimei’s killing, we read: And the king said to Shimei: “In your heart you know very well the evil that you did to David my father. Now the Lord is bringing your own evil upon your head. But King Solomon shall be blessed, and David’s throne shall be established before the Lord forever.” The king then gave the order to Benaiah, son of Jehoiada, who went out and struck him dead. And the royal power was established in Solomon’s hand. (1 Kings 2:44-46)

The Bible tells us that Prophet Solomon enslaved the peoples whom the children of Israel could not destroy like the Amorites, Hittites, Perizzites, Hivites, and Jebusites.

We read: “All the people who were left of the Amorites, Hittites, Perizzites, Hivites, and Jebusites, who were not Israelites— those of their descendants who were left in the land and whom the Israelites had not been able to destroy under the ban—these Solomon conscripted as forced laborers, as they are to this day.” (1 Kings 9:20-21)

The Bible tells us that Prophet Solomon had seven hundred wives and three hundred concubines. It is curious that the Old Testament tells us that the love for those women caused Solomon to worship false gods. We read:

“King Solomon loved many foreign women besides the daughter of Pharaoh—Moabites, Ammonites, Edomites, Sidonians, Hittites— from nations of which the Lord had said to the Israelites: You shall not join with them and they shall not join with you, lest they turn your hearts to their gods. But Solomon held them close in love. He had as wives seven hundred princesses and three hundred concubines, and they turned his heart. When Solomon was old his wives had turned his heart to follow other gods, and his heart was not entirely with the Lord, his God, as the heart of David his father had been. Solomon followed Astarte, the goddess of the Sidonians, and Milcom, the abomination of the Ammonites. Solomon did what was evil in the sight of the Lord, and he did not follow the Lord unreservedly as David his father had done. Solomon then built a high place to Chemosh, the abomination of Moab, and to Molech, the abomination of the Ammonites, on the mountain opposite Jerusalem. He did the same for all his foreign wives who burned incense and sacrificed to their gods. The Lord became angry with Solomon, because his heart turned away from the Lord, the God of Israel, who had appeared to him twice and commanded him not to do this very thing, not to follow other gods. But he did not observe what the Lord commanded. So the Lord said to Solomon: Since this is what you want, and you have not kept my covenant and the statutes which I enjoined on you, I will surely tear the kingdom away from you and give it to your servant. But I will not do this during your lifetime, for the sake of David your father; I will tear it away from your son’s hand. Nor will I tear away the whole kingdom. I will give your son one tribe for the sake of David my servant and for the sake of Jerusalem, which I have chosen.” (1 Kings 11:1-13)

Finally, given the facts that Prophet Solomon in the Bible killed his brother and his father’s men to establish the royal power in his hand, married pagan women and worshipped their false gods, why is Prophet Muhammad blamed for the presumable violence and polygamy?

Prophet Muhammad did not kill a brother of his, have hundreds of women either as wives or concubines or worship false gods as Solomon did in the Bible.

Click here to read Prophet David’s story for it is an integral part of Prophet Solomon’s story!