The Greatest Prophets between Christianity and Islam: 11-Prophet Job 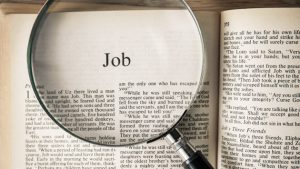 Prophet Job was a servant of God and prophet who is held up as an example of a truly patient slave of God both in the Bible and the Qur’an.

Though Christianity and Islam concur on the basic events in Prophet Job’s story, the biblical version of this story is relatively different from the Qur’anic one. Unfortunately, the Bible provides such details which do not beseem Job’s character as one of the greatest prophets.

In the Bible, the Old Testament contains an entire book named after Prophet Job comprising 42 chapters, all of which deal with the story of Prophet Job.

Though the biblical version of this story concurs with its Qur’anic counterpart in essence, the former is much more elaborate and involves such details which do not beseem Job as a prophet.

For example, the Bible tells us that the children of Prophet Job used to drink wine though the Bible itself prohibits drinking wine (Ephesians 5:18). In the Old Testament, we read: “One day when Job’s sons and daughters were eating and drinking wine in their oldest brother’s house, a messenger came to Job and reported…” (Job 1:13-22)

In several positions from the Book of Job, the Bible informs us that Job came out with statements and did acts contradicting the patience for which he is renowned.

For example, the New Testament states that Job sometimes seemed impatient, especially upon hearing news about his children’s death. It relates that he tore his clothes and shaved his hair. We read:

He was still speaking when another messenger came and reported: “Your sons and daughters were eating and drinking wine in their oldest brother’s house. Suddenly a powerful wind swept in from the desert and struck the four corners of the house. It collapsed on the young people so that they died, and I alone have escaped to tell you!” Then Job stood up, tore his robe, and shaved his head… (Job 1:18-20)

We also read: After this, Job began to speak and cursed the day he was born. He said: May the day I was born perish, and the night that said, “A boy is conceived….” (Job 3:1-3)

In Islam, Prophet Job is portrayed as a model of patience. The Qur’an narrates his story in brief for the sake of brevity and the avoidance of redundancy. It is noticeable that, unlike the Bible, the Qur’anic version of Prophet Job’s story is devoid of anything going against his integrity as a prophet.

And [mention] Job, when he called to his Lord, “Indeed, adversity has touched me, and you are the Most Merciful of the merciful.” So We responded to him and removed what afflicted him of adversity. And We gave him [back] his family and the like thereof with them as mercy from Us and a reminder for the worshippers [of Allah]. (Al-Anbiya 21:83-84)

And remember Our servant Job, when he called to his Lord, “Indeed, Satan has touched me with hardship and torment.” [So he was told], “Strike [the ground] with your foot; this is a [spring for] a cool bath and drink.” And We granted him his family and a like [number] with them as mercy from Us and a reminder for those of understanding. [We said], “And take in your hand a bunch [of grass] and strike with it and do not break your oath.” Indeed, We found him patient, an excellent servant. Indeed, he was one repeatedly turning back [to Allah]. (Saad 38:41-44)