The Greatest Prophets between Christianity and Islam: 6-Prophet Shuayb 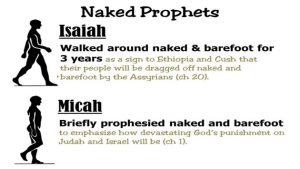 Prophet Shuayb was a descendant of Prophet Abraham. He was that prophet who was sent to the people of Midian to guide them to the oneness of God and prohibit them from fraud in measure and weight.

Anyway, let’s make a simple comparison between Prophet Isaiah and Prophet Shuayb in the light of the Bible and the Qur’an.

Despite the importance of Prophet Isaiah and his prophecies which underlie many of the Jewish and Christian beliefs, we notice that the Bible paints for him such an image which is much lower than that of the ordinary people.

The Bible tells us that he stripped his clothes off and walked naked among people for three years. It is ironic that he did so according to a commandment from God as established by the Bible. About that, there is a complete chapter in the Book of Isaiah as follows:

In the year that Tartan came unto Ashdod, when Sargon the king of Assyria sent him, and he fought against Ashdod and took it; 2 at that time Jehovah spake by Isaiah the son of Amoz, saying, Go, and loose the sackcloth from off thy loins, and put thy shoe from off thy foot. And he did so, walking naked and barefoot. 3 And Jehovah said, Like as my servant Isaiah hath walked naked and barefoot three years for a sign and a wonder concerning Egypt and concerning Ethiopia; 4 so shall the king of Assyria lead away the captives of Egypt, and the exiles of Ethiopia, young and old, naked and barefoot, and with buttocks uncovered, to the shame of Egypt. 5 And they shall be dismayed and confounded, because of Ethiopia their expectation, and of Egypt their glory. 6 And the inhabitant of this coast-land shall say in that day, Behold, such is our expectation, whither we fled for help to be delivered from the king of Assyria: and we, how shall we escape? (Isaiah 20)

Islam highly praises and honors Prophet Shuayb. In Islam, he is described as the “Preacher of the Prophets”. Al-Hakim reported through his chain of narrators on the authority of Muhammad ibn Ishaq that whenever Prophet Muhammad mentioned Prophet Shuayb ibn Michael he would say: “That was the Preacher of the Prophets for his admonishment of his people.”

Also, in the Qur’an, Prophet Shuayb is described by his people as “forbearing” and “discerning”. Though such descriptions were given as a sort of sarcasm, they were deserved and rightful. In the Qur’an, we read:

They said, “O Shuayb, does your prayer command you that we should leave what our fathers worship or not do with our wealth what we please? Indeed, you are the forbearing, the discerning!” (Hud 11:87)

It is curious enough that the Bible orders bishops to be “sober” and “of good behavior”. We read: “A bishop then must be blameless, the husband of one wife, vigilant, sober, of good behavior, given to hospitality, apt at teaching; not given to wine, not violent, not greedy for filthy lucre, but patient, not a brawler, not covetous” (1 Timothy 3:2-3)

If ordinary bishops are required to be sober and have good behavior, how come a prophet walks naked among people for three years though he was supposed to guide people to virtue and decency?