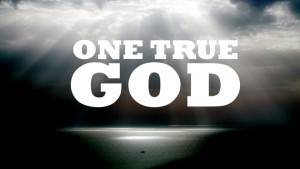 Jesus and God are not one

There are some verses in the New Testament which may make one believe that Jesus and God are one. We read: “I and the Father are one” (John 10:30)

To understand the meaning of the alleged oneness of Jesus and God, we must place the above verse in its complete context. We read:

“My Father, who has given them to me, is greater than all; no one can snatch them out of my Father’s hand. I and the Father are one.” Again the Jews picked up stones to stone him, but Jesus said to them, “I have shown you many great miracles from the Father. For which of these do you stone me?” “We are not stoning you for any of these,” replied the Jews, “but for blasphemy, because you, a mere man, claim to be God.” Jesus answered them, “Is it not written in your Law, ‘I have said you are gods’? If he called them ‘gods,’ to whom the word of God came–and the Scripture cannot be broken– what about the one whom the Father set apart as his very own and sent into the world? Why then do you accuse me of blasphemy because I said, ‘I am God’s Son’? Do not believe me unless I do what my Father does. But if I do it, even though you do not believe me, believe the miracles, that you may know and understand that the Father is in me, and I in the Father.” Again they tried to seize him, but he escaped their grasp. (John 10:29-39)

In the above verses, Jesus explains what is meant by his oneness with God and how God is in him and he is in God and the meaning of being the son of God. He made clear that the meaning of his oneness with God and God’s being in him and his being in God is that he did such acts which were approved by God. He also indicated that just as Jews were called “gods” for the word of God came to them, he was also called “the son of God” because the word of God came to him and he did the acts of God.

Another piece of evidence which Christians offer to prove that Jesus and God are one is the following verse:

It is curious that the above evidence is the same evidence which may be offered to refute the above Christian claim. The above verse tells us that not only God and Jesus are one but also God, Jesus and the disciples are one.

Similar evidence is: “I will remain in the world no longer, but they are still in the world, and I am coming to you. Holy Father, protect them by the power of your name–the name you gave me–so that they may be one as we are one.” (John 17:11)

We also read: “So now Jesus and the ones he makes holy have the same Father. That is why Jesus is not ashamed to call them his brothers and sisters.” (Hebrews 2:11)

We further read: “For he himself is our peace, who has made the two groups one and has destroyed the barrier, the dividing wall of hostility, by setting aside in his flesh the law with its commands and regulations. His purpose was to create in himself one new humanity out of the two, thus making peace, and in one body to reconcile both of them to God through the cross, by which he put to death their hostility. He came and preached peace to you who were far away and peace to those who were near. For through him we both have access to the Father by one Spirit.” (Ephesians 2:14-18)

“Make every effort to keep the unity of the Spirit through the bond of peace. There is one body and one Spirit, just as you were called to one hope when you were called; one Lord, one faith, one baptism; one God and Father of all, who is over all and through all and in all.” (Ephesians 4:3-6)

It is crystal clear that the above verses should not be understood literally but metaphorically. Similar verses are also found in the New Testament. They tell us that Jesus and his followers are one and their bodies are his members.

We read: “Do you not know that your bodies are members of Christ himself? Shall I then take the members of Christ and unite them with a prostitute? Never! Do you not know that he who unites himself with a prostitute is one with her in body? For it is said, “The two will become one flesh.” But whoever is united with the Lord is one with him in spirit.” (1 Corinthians 6:15-17)

The New Testament often indicates that Jesus’ followers are one in him. We read: “Because there is one loaf, we, who are many, are one body, for we all share the one loaf.” (1 Corinthians 10:17)

We also read: “For just as each of us has one body with many members, and these members do not all have the same function, so in Christ we, though many, form one body, and each member belongs to all the others.” (Romans 12:4-5)

We further read: “Whatever happens, conduct yourselves in a manner worthy of the gospel of Christ. Then, whether I come and see you or only hear about you in my absence, I will know that you stand firm in the one Spirit striving together as one for the faith of the gospel” (Philippians 1:27)

For more information, refer to I Corinthians 12. It explains how the followers of Jesus are one in him.

The New Testament also informs us that a married couple becomes one flesh. We read: “And said, ‘For this reason a man will leave his father and mother and be united to his wife, and the two will become one flesh.’” (Matthew 19:5)

In fact, a married couple does not become one flesh literally but metaphorically. It is a metaphor intended to indicate how close and intimate a man and a woman become after marriage.

Therefore, the alleged oneness of Jesus and God does not mean that Jesus is God or even the son of God but it is a metaphor intended for showing how Jesus is close and attached to God as a prophet and messenger of God. The evidence for that is that it is impossible that God, Jesus and the disciples are one. This is a figurative usage indicating how the disciples are close and attached to God and Jesus. “God, Jesus, the disciples or Jesus’ followers are one” is a metaphor referring to God’s company, support and protection.

The New Testament include such verses which prove that God is One and metaphorically referred to as “the Father” and that Jesus is Just a teacher. We read: “But you are not to be called rabbi, for you have one teacher, and you are all brothers. And call no man your father on earth, for you have one Father, who is in heaven. Neither be called instructors, for you have one instructor, the Christ.” (Matthew 23:8-10)

The New Testament also involves an affirmation of the oneness of God and the description of Jesus as a mediator. We read: “For there is one God and one mediator between God and mankind, the man Christ Jesus.” (1 Timothy 2:5)

Jesus himself is quoted as confirming that God is One and the Jewish rabbis approved that. We read: “One of the teachers of the law came and heard them debating. Noticing that Jesus had given them a good answer, he asked him, ‘Of all the commandments, which is the most important?’ ‘The most important one,’ answered Jesus, ‘is this: ‘Hear, O Israel: The Lord our God, the Lord is one. Love the Lord your God with all your heart and with all your soul and with all your mind and with all your strength.’ The second is this: ‘Love your neighbor as yourself.’ There is no commandment greater than these.’ ‘Well said, teacher,’ the man replied. ‘You are right in saying that God is one and there is no other but him.’” (Mark 12:28-32)

Finally, the New Testament encompasses many verses proving the Oneness of God and negating the attribution of any partner or child to Him. We read: “since there is only one God.” (Romans 3:30)

We also read: “So then, about eating food sacrificed to idols: We know that ‘An idol is nothing at all in the world’ and that ‘There is no God but one.’” (1 Corinthians 8:4)