The Last Day according to Judaism, Christianity and Islam (2/2) 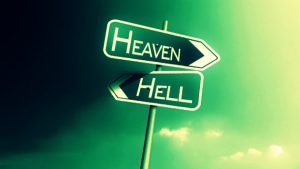 Unlike Jews and Christians, Muslims believe that on Heaven (Paradise) is accessible to believers from all nations

In the first part, we dealt with the Last Day in terms of portents, descriptions and judgment according to Jews, Christians and Muslims.

In this second part, we will deal with the Last Day in terms of Heaven and Hell according to Jews, Christians and Muslims.

While all followers of the heavenly messages believe in the Last Day, the fate of human beings on this day between Heaven and Hell varies from one message to another, even involves ambiguity and lacks justice in some of those messages.

Heaven and Hell according to Judaism

As for the Talmud, we find a few references to Heaven and Hell as abodes of the good and wicked people. For example, we read: “Creator of the Universe, Thou hast judged rightly, finding the righteous just and the wicked full of iniquity, (and blessed be Thou) that Thou hast ordained hell for the wicked and paradise for the righteous.” (Chapter II – Tract Erubin)

The Talmud states that fire will not touch even the sinful Jews for their forefather Abraham will rescue them. We read: “The fires of hell cannot gain access to the bodies of the sinners of Israel; Abraham the patriarch, seeing that they are circumcised, rescues them.” (Chapter II – Tract Erubin)

And they say, “Never will the Fire touch us, except for a few days.” Say, “Have you taken a covenant with Allah? For Allah will never break His covenant. Or do you say about Allah that which you do not know?” (Al-Baqarah 2:80)

Heaven and Hell according to Christianity

Heaven and Hell are often mentioned in the New Testament. Heaven is sometimes mentioned alone, sometimes coupled with “Kingdom”, and sometimes referred to as “Kingdom”.

In the New Testament, we read: “Just as people gather weeds and burn them in the fire, so it will be at the end of the present age. The Human One will send his angels, and they will gather out of his kingdom all things that cause people to fall away and all people who sin. He will throw them into a burning furnace. People there will be weeping and grinding their teeth. Then the righteous will shine like the sun in their Father’s kingdom. Those who have ears should hear.” (Matthew 13:40-43)

Like the Talmud, the New Testament tells that Heaven will be the abode of Christians only. As for non-Christians, Hell will be their abode.

In the Pauline epistles, we read for example: “After all, it’s right for God to pay back the ones making trouble for you with trouble and to pay back you who are having trouble with relief along with us. This payback will come when the Lord Jesus is revealed from heaven with his powerful angels. He will give justice with blazing fire to those who don’t recognize God and don’t obey the good news of our Lord Jesus. They will pay the penalty of eternal destruction away from the Lord’s presence and away from his mighty glory.” (2 Thessalonians 1:6-9)

We also read: “Keep each other in the love of God, wait for the mercy of our Lord Jesus Christ, who will give you eternal life. Have mercy on those who doubt. Save some by snatching them from the fire. Fearing God, have mercy on some, hating even the clothing contaminated by their sinful urges.” (Jude 21-23)

About that, we read in the Qur’an:

But the Jews and the Christians say, “We are the children of Allah and His beloved.” Say, “Then why does He punish you for your sins?” Rather, you are human beings from among those He has created. He forgives whom He wills, and He punishes whom He wills. And to Allah belongs the dominion of the heavens and the earth and whatever is between them, and to Him is the [final] destination. (Al-Ma’idah 5:18)

On the contrary, we find the four gospels quoting Jesus as confirming that some Christians will not enter the kingdom of heaven like wrongdoers. We read: “Not everybody who says to me, ‘Lord, Lord,’ will get into the kingdom of heaven. Only those who do the will of my Father who is in heaven will enter. On the Judgment Day, many people will say to me, ‘Lord, Lord, didn’t we prophesy in your name and expel demons in your name and do lots of miracles in your name?’ Then I’ll tell them, ‘I’ve never known you. Get away from me, you people who do wrong.’” (Matthew 7:21-23)

We also read: “I say to you that unless your righteousness is greater than the righteousness of the legal experts and the Pharisees, you will never enter the kingdom of heaven.” (Matthew 5:20)

We even find the four gospels quoting Jesus as promising Heaven or Kingdom to some people without requiring belief in him as God and Lord. In the Gospel of Matthew, we read:

Heaven and Hell according to Islam

And if you are in doubt about what We have sent down upon Our Servant [Muhammad], then produce a surah the like thereof and call upon your witnesses other than Allah, if you should be truthful. But if you do not – and you will never be able to – then fear the Fire, whose fuel is men and stones, prepared for the disbelievers. (Al-Baqarah 2:23-25)

And We remove whatever rancor may be in their hearts. Rivers flow beneath them. And they say: The praise to Allah, Who hath guided us to this. We could not truly have been led aright if Allah had not guided us. Verily the messengers of our Lord did bring the Truth. And it is cried unto them: This is the Garden. Ye inherit it for what ye used to do. (Al-A`raf 7:43)

And they say, “None will enter Paradise except one who is a Jew or a Christian.” That is [merely] their wishful thinking, Say, “Produce your proof, if you should be truthful.” Yes [on the contrary], whoever submits his face in Islam to Allah while being a doer of good will have his reward with his Lord. And no fear will there be concerning them, nor will they grieve. The Jews say “The Christians have nothing [true] to stand on,” and the Christians say, “The Jews have nothing to stand on,” although they [both] recite the Scripture. Thus the polytheists speak the same as their words. But Allah will judge between them on the Day of Resurrection concerning that over which they used to differ. (Al-Baqarah 2:111-113)

However, subsequent to Prophet Muhammad’s mission, all mankind hearing about him constitute his “Called Community”. Those who actually believe in him constitute his “Respondent community” and will ultimately go to Heaven, whereas those who disbelieve in him will go to Hell along with the other disbelievers in the messengers, prophets and scriptures of God.
Notwithstanding, some sinful Muslims will initially go to Hell. For example, those who devour the property of orphans unjustly will go to Hell. About them, we read in the Qur’an:

Indeed, those who devour the property of orphans unjustly are only consuming into their bellies fire. And they will be burned in a Blaze. (An-Nisaa’ 4:10)

Those who devour people’s wealth unjustly will also go to Hell. About them, we read in the Qur’an:

O you who have believed, do not consume one another’s wealth unjustly but only [in lawful] business by mutual consent. And do not kill yourselves [or one another]. Indeed, Allah is to you ever Merciful. And whoever does that in aggression and injustice – then We will drive him into a Fire. And that, for Allah, is [always] easy. (An-Nisaa’ 4:29-30)

Nevertheless, believers in God as well as His prophets and scriptures will not remain in Hell forever even if they are sinful. They will rather remain in Hell for some time and then get admitted to Heaven but, of course, in such a rank which is lower to that of the righteous people. About that, we read in the Qur’an:

Indeed, Allah does not forgive association with Him, but He forgives what is less than that for whom He wills. And he who associates others with Allah has certainly fabricated a tremendous sin. (An-Nisaa’ 4:48)

And there is none of you except he will come to it. This is upon your Lord an inevitability decreed. Then We will save those who feared Allah and leave the wrongdoers within it, on their knees.(Maryam 19:71-72)

Finally, to conclude, the Jewish and Christian scriptures involve either ambiguity like the Old Testament or injustice like the New Testament in terms of Heaven and Hell. In contrast, the Qur’an is very clear when dealing with Heaven and Hell and very just when indicating who will go to Heaven and Hell.

Last Day’s Portents, Descriptions and Judgment according to Jews, Christians and Muslims

Will Christians Go to Hell?