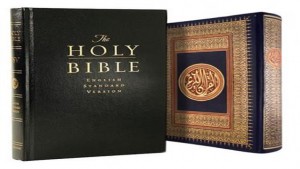 In fact, each faith must have a holy book which guides people to their creator and teaches them their worldly and otherworldly matters. In any such holy book, the features of the faith are reflected and therefore this faith can be judged as right or false.

Since the “Bible” is the book which Christians have taken as their holy book, we have scrutinized and examined it. However, unfortunately, we found out that the Bible contains such parts which hinder us from dealing with it as a holy book revealed by God or suitable for each time and space as Christians allege. We have found many words which could not have been revealed or used by God in the pornographic context found in the Bible.

Supposing that God actually revealed some of the controversial parts found in the Bible, people cannot still read them rather than use them for worship purposes. Supposedly, the true words of God can be reviewed by every human being, young or old, male or female. So, if certain words are ascribed to God but it is not proper for man to read them, there must be something wrong.

Without taking the trouble to prove that the “Bible” is distorted, everybody agrees that there are many positions in the “Bible” which are deemed shameless and offensive and cannot be read by a decent person, man or woman, boy or girl. This can serve as sufficient evidence of the Bible’s unsuitability for each time or each space.

It is of no avail for the Bible’s proponents to continue to defend it for if they happen to overcome the obstacle of the validity of its ascription to God, they will not manage to resolve the dilemma of its suitability for each time and each space. It is better to give up fancy and arrogance and follow the truly holy book which has been really revealed by God and does not contain any parts or words which affect its suitability for each time and each space. Each person, young or old, male or female, can read it quite smoothly without inconvenience or embarrassment.

A reader of the Qur’an observes that it is quite far away from obscenity or offensive language. Wherever there is a need for the usage of a word which some people may find it embarrassing to use or read, the Qur’an uses such words which beseem the Divine Entity as the source of revelation and the human honor and dignity as the recipient and reader of such revelation.

Therefore, we do not find any obscene words in the Qur’an which many people may shy away from reading or using in public unlike the Bible.

At last, as it is purported, since things are known through comparison with their opposites, you are kindly invited to read this glossary to draw a comparison between the Bible and the Qur’an.