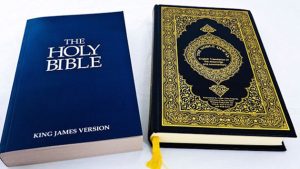 In fact, there are several religions and faiths whose followers claim that they have the word of God kept in the form of Holy Scriptures. On earth, there are now numerous Holy Scriptures which are allegedly revealed by God, mainly the Bible and the Qur’an.

Based on ample evidence, there can be some holy scripture purely from God, whereas others cannot. To decide which scripture was wholly sent down by God and which was not, we can use the same criteria we use to know whether some literary work is attributable to some eloquent, well-spoken artist.

One of the most important criteria to be used in this regard is the extent of duplication and identity within the very parts of the same scripture. The words of God cannot be copied word by word verbatim from one another.

A scripture really revealed by God cannot involve long duplicate and identical parts. Otherwise, this will be deemed a sort of redundancy. The words of God can never be redundant. A redundant literary work can never be ascribed to an eloquent, well-spoken artist. How can we ascribe redundancy to God, Who is the source of eloquence and rhetoric?

The Bible abounds in almost identical chapters involving duplicate details with, sometimes, irreconcilable contradictory differences. But, the Qur’an does not involve any identical chapters. It just contains certain ideas and stories which are repeated with similar rather than identical wordings and such different details which complement rather than contradict one another.

As for the Bible, the Old Testament and the four gospels in the New Testament are full of identical chapters with details which are either duplicate or contradictory.

Accordingly, it is quite evident that the Bible can never be the pure word of God, though it still includes some words of God. The thorough review of its contents indicates that its books and chapters were written down in different periods of time with long intervals in between.

In the course of time, due to transcriptions by many people at various points of time, the Bible was exposed to a lot of additions and omissions which caused it to end up in such a deplorable state as an unidentifiable mixture of the word of God and the word of man without distinction.

As such, the scribes of the Bible formulated it according to their own fancy in the absence of any control, supervision or even guidance. So, one scribe included a certain book or chapter in the Bible. Later on, another scribe would include the same book or chapter on an as is basis or with slight, albeit contradictory, differences elsewhere in the Bible.

When the Bible was first compiled as one Holy Scripture, the duplicate and identical books and chapters were made into one book without paying heed to the fact that they were transcribed from one another.

As for the Qur’an, according to our thorough review, it proves the word of God for it is free of any identical or duplicate chapters. While it involves similarities in some of its contents, there is neither literal nor ideological duplication nor identity. The longest identical and duplicate position in the Qur’an is four short verses.

Consequently, one of the main differences between the Bible and the Qur’an is that, in the Bible, we get the same story with almost identical wordings and duplicate or, sometimes, contradictory details from the various biblical books and chapters. But, in the Qur’an, we get the same story with different wordings and different, albeit complementary, details from the various Qur’anic chapters.