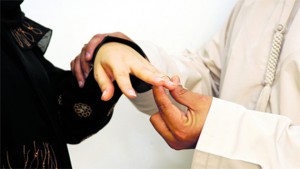 Christianity encourages celibacy and prohibits widows and divorcees from remarriage.

Marriage or Celibacy & Right to Marriage

On the contrary, man can dispense with the benefits which he may get from a wife in an illegitimate way. He may buy both sexual gratification and housekeeping with money.

Now concerning the matters about which you wrote: “It is good for a man not to have sexual relations with a woman.” (1 Corinthians 7:1)

“To the unmarried and the widows I say that it is good for them to remain single as I am.” (1 Corinthians 7:8)

“Now about virgins: I have no command from the Lord, but I give a judgment as one who by the Lord’s mercy is trustworthy. Because of the present crisis, I think that it is good for a man to remain as he is. Are you pledged to a woman? Do not seek to be released. Are you free from such a commitment? Do not look for a wife. But if you do marry, you have not sinned; and if a virgin marries, she has not sinned. But those who marry will face many troubles in this life, and I want to spare you this.” (1 Corinthians 7:25-28)

“So then, he who marries the virgin does right, but he who does not marry her does better. A woman is bound to her husband as long as he lives. But if her husband dies, she is free to marry anyone she wishes, but he must belong to the Lord. In my judgment, she is happier if she stays as she is—and I think that I too have the Spirit of God.” (1 Corinthians 7:38-40)

Needless to say, monks and nuns are under an obligation to remain celibate so that the “celibacy vow” will not be broken, following in the footsteps of Mary and her son, Jesus Christ.

However, though such imposition of celibacy goes against the human nature, and what is more, is not provided for in the Bible, it still involves equality between man and woman. Yet, the imposition of celibacy on women goes farther than that in Christianity to such an extent which oversteps the bounds of justice and equality.

Christianity prohibits widows and divorcees from remarriage and prohibits men from marrying them. It deems their desire for marriage a sort of a lack of dedication to Christ. We read: “As for younger widows, do not put them on such a list. For when their sensual desires overcome their dedication to Christ, they want to marry.” (1 Timothy 5:11)

As for Islam, it makes it incumbent on all able-bodied men who can afford marriage to marry. At the same time, it makes it lawful for all unmarried Muslim women to get married.

Anas reported that three men came to the houses of the wives of the Prophet (peace be upon him) to inquire about the worship of the Prophet. When they were informed, they considered their worship insignificant and said: “Where are we in comparison with the Prophet while God has forgiven his past sins and future sins?” One of them said: “As for me, I shall offer Salah all night long.” Another said: “I shall observe fasting continuously and shall not break it”. Another said: “I shall abstain from women and shall never marry”. The Prophet came to them and said, “Are you the people who said such and such things? By God, I fear God more than you do, and I am most obedient and dutiful among you to Him, but still I observe fasting and break it; perform Salah and sleep at night and take wives. So whoever turns away from my Sunnah (tradition) does not belong to me”. (Bukhari and Muslim)

The prohibition of celibacy is provided in the Qur’an which blames monks for celibacy and monasticism they innovated. In the Qur’an, God says:

Monasticism, which they innovated; we did not prescribe it for them (Al-Hadid 57:27)

When it comes to the right to marriage, there is no discrimination against any class of women. All of them, be they virgin or previously married, are entitled to get married.

The Qur’an urges the Muslim community to help unmarried Muslims, be they men or women, freemen or slaves, get married. In the Qur’an, God says:

And marry the unmarried among you and the righteous among your male slaves and female slaves. If they should be poor, Allah will enrich them from His bounty, and Allah is all-Encompassing and Knowing. (An-Nur 24:32)

Consequently, Islam did not impose a ban on the marriage of divorcees and widows as Christianity does. Prophet Muhammad’s marriages can be held up as examples when it comes to giving all women the right to marriage. He married both virgins and previously married women as well. He even married only one virgin, namely Lady Aishah (may God be pleased with her). Still, all of his other wives were previously married women, i.e. widows or divorcees.

To conclude, Islam makes a male caretaker and breadwinner available for each woman within an honorable, decent framework, forbids all forms of extramarital sexual gratification, and grants each woman the right to marriage, be she is virgin or previously married on an equal footing.

Your Comprehensive Guide to Women’s Status in Islam and Christianity