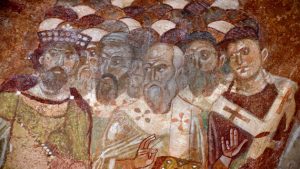 Imaginary picture of the Council of Nicaea

Indeed, many contemporary Christians do not know that many of their contemporary beliefs, laws and rites are not based on the Bible, including the Old Testament and the New Testament.

As such, Christianity is just a fabric mostly woven by the early popes before and during the First Council of Nicaea, which was the first ecumenical council laying the foundations of the contemporary Christianity.

Thus, the Christian tradition handed down by the early popes and fathers has become an important source of legislation, principle of faith and reference to the religious practice in Christianity.

Though the statements and acts of some early Muslims are considered sources of the Islamic jurisprudence like the Companions’ statements and the practices of Medina’s people, there are big differences between them and the church tradition.

For example, the Companions’ statements and the practices of Medina’s people have nothing to do with the fundamentals but the subsidiaries of Islam. The fundamentals of Islam were established in Prophet Muhammad’s lifetime. But, the Christian tradition underlies the belief system, law and practice in Christianity.

Moreover, the Companions’ statements and the practices of Medina’s people are not unanimous sources in Islam. They are adopted by just a few Muslim scholars.

The earliest profession of faith, namely the Nicene Creed, involving the doctrine of the Holy Trinity and Jesus’ divinity, was adopted at the Council of Nicaea in 325, mostly under the influence of Pope Alexander I of Alexandria, the 19th Pope of Alexandria & Patriarch of the See of St. Mark.

It was Pope Demetrius I of Alexandria, the 12th Pope of Alexandria & Patriarch of the See of St. Mark, who established a fixed basis for fasts and Christian holy days. He established the reckoning by which the dates of fasting were determined. A scholar in his own right, Demetrius took part in the controversy over the proper calculation of Easter. He was the first to devise the calculation for fixing the dates to celebrate Easter each year. His calculation was approved by the Nicene Ecumenical Council (325 AD). Today many of the Eastern Orthodox churches continue to use his calculation.

A seven-week Lent before Easter is usually attributed to the pontificate of Pope Telesphorus, the Pope of the Catholic Church from 126 to 137.

It was Pope Vector I, the Pope of the Catholic Church in the late second century, who caused the Roman church to shift from Greek to Latin for the liturgy.

It was Pope Soter, the Pope of the Catholic Church from 167 to 174, who declared that marriage was valid only as a sacrament blessed by a priest.

From Jesus’ Ascension until the Council of Nicaea, the clergy were under no obligation to remain celibate though this was just recommended by Paul in his epistles in the New Testament.

It is noteworthy that prior to the Council of Nicaea, Pope Callistus I, the Bishop of Rome from 218 to 223, allowed the lower clergy to get married and remarried.

However, in the wake of the Council of Nicaea, the clergy were not allowed to remarry. The already married clergy were ordered to maintain sexless marriages. Post-Nicene clergy have not been allowed to get married.

The (Christian) Easter day remained subject to considerable controversy among Christians and even among popes, patriarchs and fathers themselves for more than three centuries from Jesus’ Ascension until the Council of Nicaea in 325.

There were some churches which insisted on celebrating this feast on the same day as the Jewish Easter day (Passover), on the 14th of Nisan, which was the day Jesus was allegedly crucified according to the contemporary Christian creed, even if it was not a Sunday.

Other churches, including the Roman Catholic Church during the pontificate of its successive popes, insisted on celebrating the Easter on a Sunday.

The inter-Christian difference sometimes went so far that Pope Anicetus, the Pope of the Catholic Church from 157 to 168, allowed each church to retain the date to which they were accustomed.

The stated controversy lasted until the Council of Nicaea created in 325 decided it in favor of the Roman Catholic Church. The Council resolved: first, that the Easter would be always celebrated on a Sunday; second, it would be that Sunday following the 14th of Nisan.

It was Pope Julius, the Pope of the Catholic Church from 337 to 352, who set the date of 25 December for celebrating the Nativity.

The tradition of Christmas Midnight Masses is usually attributed to the pontificate of Pope Telesphorus, the Pope of the Catholic Church from 126 to 137.

The introduction of the customs of using blessed water mixed with salt for the purification of Christian homes from evil influences, as well as that of mixing water with the sacramental wine, are attributed to Pope Alexander I, the Pope of the Catholic Church from 107 to 115.

Last Supper in the Liturgy of the Mass

According to the Liber Pontificalis, it was Alexander I, the Pope of the Catholic Church from 107 to 115, who inserted the narration of the Last Supper (the Qui pridie) into the liturgy of the Mass.

Recitation of the Sanctus with the People

It was Pope Sixtus I, the Pope of the Catholic Church from 115 to 124, who passed an ordinance that after the Preface in the Mass the priest shall recite the Sanctus with the people.

Singing of the Gloria

The singing of the Gloria is usually attributed to the pontificate of Pope Telesphorus, the Pope of the Catholic Church from 126 to 137.

Priests Standing and Bowing Their Head as They Read from Gospels

It was Pope Anastasius I, the Pope of the Catholic Church from 399 to 401, who instructed priests to stand and bow their heads as they read from the gospels.