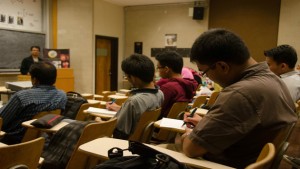 Youth is the most vital stage of life, worthy to make the best use of it and to strive toward excellence. Youngsters are full of energy and vivid passions. Their road is paved with hope, persistence and enlightened thinking. Indeed, it is the period of beneficial production for generations to come. Muslim youth must be aware of the essential importance and value of their life, direct it to the right way in order to achieve the best outcome.

It is a very sensitive period that requires caring, reinforcement of good guidance to Allah‘s way and good ethics. Remember that it is through faith and good ethical values that Muslims rise in status in this world and the Hereafter. Allah, Exalted be He, says:

They were youths who believed in their Lord, and We increased them in guidance. (Al-Kahf 18:13)

Islam takes very special care of the youth, and urges youngsters to make the best use of this valuable period of their life. Every Muslim shall be asked by Almighty Allah about his/her life it in the Hereafter, but the period of youth has a special reckoning of Allah. Prophet Muhammad (peace be upon him) said: “The son of Adam will not pass away from Allah until he is asked about five things: how he lived his life, and how he utilized his youth, with what means he earned his wealth, how he spent his money, and what he did with his knowledge.”

Islam emphasizes the merits of young people developing knowledge and understanding of Allah’s guidance, adhering to His commands, and aspiring to be the best by performing good acts. Young people have the physical and mental abilities for being mindful of Allah in all aspects of life. As human beings get older, they start losing the enthusiasm and the power of their good old years.

Islam has stressed the immense value of early religious and ethical teachings, the closeness to Almighty Allah and the fulfillment of His commands overtly and privately. Luqman’s advice to his son includes one’s relation to Almighty Allah:

It is important to note that the Sunnah consolidates the period of childhood which precedes that of youth in order to guarantee the solidity of its basis. Thus, the importance of regular prayer is emphasized from early childhood. The prophet (peace be upon him) said: “Order your children to pray at the age of seven.”

Youngsters have strong physical drive and desire that must be directed properly, to safeguard one’s faith, and strive to avoid committing immoral and unlawful acts. It is no wonder that Islam emphasizes marriage so much. We are often reminded that a Muslim cannot have a relationship unless it is within marriage, to protect the family institution or for proliferation. Prophet Muhammad (peace be upon him) said: “O young men! Those of you who can support a wife should marry, for it (marriage) controls the gaze and preserves one from immorality. And whoever cannot (marry) should fast; for it is a means of reducing the sexual desire.”

Prophet Muhammad (peace be upon him) gave young believers glad tidings that Allah will bestow upon them His forgiveness in the Hereafter. Our believed Prophet said: “Seven (kinds of people) will be sheltered under the shade of Allah on the Day of Judgment (among them) a young man who passed his youth in the worship and service of Allah…”

Islamic history has a myriad of examples of great Muslim youth who were luminaries of humanity. We remind you, dear readers, of young believers who gathered around the Prophet (peace be upon him) in the beginning of his call and young people who carried the call. To name a few, Zaid bin Thabet (may Allah be pleased with him) who collected the whole text of the Holy Qur’an, and Mus’ab bin Umair (may Allah be pleased with him) who was the first ambassador in Islam. He was asked by Prophet Muhammad (peace be upon him) to go to Madina to teach the Qur’an and through him and his teachings the people of Madina converted to Islam.

The history of Islam was marked by the contributions of eminent young Muslim scholars such as Ibn Abbas (may Allah be pleased with him) who was considered the real father of the science of interpretation of the Holy Qur’an. Imam Abu Hanifa, Malek, Ashafi’ and Ahmad bin Hanbal were young scholars and the fathers of the four schools of jurisprudence. We implore Almighty Allah to forgive and have mercy on all of them. May Allah bestow His blessings upon all young Muslims and guide them to have a fruitful life for the benefit of their people and their countries.

Youngsters nowadays have all the fundamental elements of success and excellence. Schools, colleges, universities, cultural and scientific centers strive to offer the best education. Their physical needs are met through sport and entertainment centers. Because education has become of utmost importance, students are awarded educational and training scholarships abroad to widen their perspective on life, enhance their education and knowledge as well as their abilities and talents. Studying abroad also aims to gain knowledge of the latest technologies in economy, industry, agriculture, medicine, engineering ,sports and many other fields. Outstanding students are honored, and offered the best job opportunities to assume high positions. Financial aid is given to them to own houses and create families. It is the responsibility of young people today to take advantage and fulfill the dream of their country and prudent leadership, as well as their parents who are eager to see the fruits of their upbringing and care and be proud of their children as successful adults with fulfilling lives.
________________
Source: awqaf.ae.