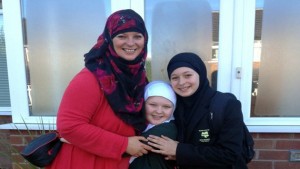 ‘Thanks to my mother who took me to conferences and meetings, I came to know Islam.’

According to several recent British studies, the number of Muslims in the UK has increased by 37% over the last six years, while the number of mosques has reached 1,500, al Jazeera.net reported.

With the fact that hundreds of British people are embracing Islam, the British authorities recently confirmed the numbers of British prisoners and students converting to Islam are on the rise every day.

During a tour to mosques and Islamic centers there, al Jazeera.net has reported that some of the children who converted to Islam are originally from Brazil, Luxembourg, Panama, and Sweden.

Interviewing Alexandra, the daughter of Lauren Booth, Tony Blair’s sister-in-law, who converted to Islam in Ramadan at the age of 12, she said:

‘Thanks to my mother who took me to conferences and meetings I came to know Islam. Converting to Islam has given me much tranquility and soulful satisfaction.’

Alexandra remarked how Islam has changed her life forever and certainly for the better:

‘My life is no more the same; now I love God and I fear Him’, Alexander said.

On the moment of her conversion the girl recalled how the warm senses of peace and serenity washed over her when she uttered the Shahadah as if her soul ascending upward saying ‘I did it. Yes, I did it’.

More respect and humility are among the many things that Islam gave her, that after wearing the hijab, she feels self-respectful and dignified as she never felt before, she noted.

‘I was lucky starting at a secondary school this year where I’m treated with gentleness and respect. I feel welcome there, that I even have a separate prayer room.’

Alexandra concluded that it is by the will of God that she became Muslim.

On her family and relatives’ reactions to her conversion, she said that she hasn’t met her aunt, the ex-PM’s wife, yet.

‘At first it provoked weird reaction; in the first weeks after conversion my father’s family were staring at me strangely. But then they came to treat me very normally.’

In Love with Minarets

Aged 14, George, originally from Sweden, for his part, converted to Islam after reading about Islam and identifying with Muslim families and friends in London.

George explained that his first relationship with Islam was through minarets, which he then used to photograph, and the Adhan (Islamic Call to Prayer):

‘I couldn’t help waiting for the Adhan to feel that strange feeling, what made me turn to my father to explain the mystery’, he said.

‘George’s curiosity to learn about Islam and his love for call prayers has led him to embrace Islam,’ Abdullah, George’s school colleague, then close friend, said.

‘My father’s answer that ‘it’s just a temporary feeling’ helped only increase my curiosity exponentially. That’s why I turned to `Abdullah for consultation.’

The boy’s link with Islam strengthened after moving to Abu Dhabi where his father was offered a job in aviation.

George’s life came to a u-turn on seeing the close, healthy and stable family relations Muslims have, and how they are built on love, respect, remarkable strength and nobility.

About the biased and sensational way in which Western media deals with and portrays Islam, George said this was part of his initial motivation to study about Islam.

“What is all this controversy about Islam for?” George asked his father.

After `Abdullah and Tamer, the school colleagues, helped George learn more about Islam through the internet, he told his family that he wants to be a Muslim.

George’s family didn’t oppose his decision, but asked him to think deeply before taking it.

He did and took the decision, converted to Islam last month in London.

‘Islam is my real love’ said Sheila Rudd, 15, from South London, describing her relationship with the new religion.

‘It’s not a lust, a disgusting glass of alcohol or a drug sold on cheap markets for pleasure.’

Rudd, who converted to Islam a year ago, enthusiastically declared how happy she is seeing people entering Islam every day in Britain.

‘It tells that the media lies and bias have failed in distorting the true image of Islam. On the contrary, it made more people learn about Islam and, consequently, choose it’, she said.

Upon embracing Islam, British converts admitted that they felt inside a deep breath of relief and happiness that were never experienced before.

According to the British authorities, the emotional, soulful void felt by the British youth is the principal motive behind seeking Islam as propeller for lasting happiness and peace.

Observers say that in place of failing role of the Church and, accordingly, of Christianity and Judaism in general, and the moral decay and spiritual emptiness in the British society, Islam has become the safe haven of peace, content, and tranquility.

How did Prayer and Fasting in Ramadan Convert Christina to Islam?

How did Fasting in Ramadan Lead Lauren Booth to Islam?

One thought on “Young Briton Converts to Islam”

“: Young Briton Converts to Islam – http://t.co/YMYZOvUiey that’s so beautiful,you must read it guys