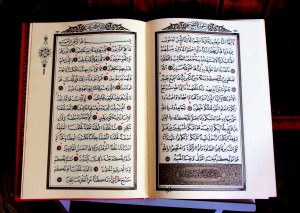 And I (Allah) created not the jinn and mankind except that they should worship Me. (Adh-Dhariyat 51:56)

Indeed, your Lord is Allah, who created the heavens and earth in six days and then established Himself above the Throne. He covers the night with the day, [another night] chasing it rapidly; and [He created] the sun, the moon, and the stars, subjected by His command. Unquestionably, His is the creation and the command; blessed is Allah, Lord of the worlds. (Al-A`raf 7:54)

Allah – there is no deity except Him, the Ever-Living, the Sustainer of [all] existence. Neither drowsiness overtakes Him nor sleep. To Him belongs whatever is in the heavens and whatever is on the earth. Who is it that can intercede with Him except by His permission? He knows what is [presently] before them and what will be after them, and they encompass not a thing of His knowledge except for what He wills. His Kursi extends over the heavens and the earth, and their preservation tires Him not. And He is the Most High, the Most Great. (Al-Baqarah 2:255)

3) Did you think that Allah created you only for play and without any purpose?

Then did you think that We created you uselessly and that to Us you would not be returned?” So exalted is Allah, the Sovereign, the Truth; there is no deity except Him, Lord of the Noble Throne. (Al-Mu’minun 23:115-115)

4) For what did Allah create mankind?

And I (Allah) created not the jinn and mankind except that they should worship Me. (Adh-Dhariyat 51:56)

5) What did Allah command us to do?

Indeed, Allah commands you to render trusts to whom they are due and when you judge between people to judge with justice. Excellent is that which Allah instructs you. Indeed, Allah is ever Hearing and Seeing. (Al-Nisa’ 4:58)

Say, “Come, I will recite what your Lord has prohibited to you. [He commands] that you not associate anything with Him, and to parents, good treatment, and do not kill your children out of poverty; We will provide for you and them. And do not approach immoralities – what is apparent of them and what is concealed. And do not kill the soul which Allah has forbidden [to be killed] except by [legal] right. This has He instructed you that you may use reason.” (Al-An`am 6:151)

6) From where shall we seek guidance?

7) Who shall we invoke in time of disaster?

And when they board a ship, they supplicate Allah, sincere to Him in religion. (Al-`Ankabut 29:65)

8) What happened to the previous nations when they disobeyed Allah?

9) Does Allah guard and save the Qur’an from corruption?

11) What is the religion of Allah?

Indeed, the religion in the sight of Allah is Islam. And those who were given the Scripture did not differ except after knowledge had come to them – out of jealous animosity between themselves. And whoever disbelieves in the verses of Allah, then indeed, Allah is swift in [taking] account. (Aal `Imran 3:19)

12) What is the religion accepted by Allah?

And whoever desires other than Islam as religion – never will it be accepted from him, and he, in the Hereafter, will be among the losers. (Aal `Imran 3:85)

Thus has He revealed to you, [O Muhammad], and to those before you – Allah, the Exalted in Might, the Wise. (Ash-Shura 42:3)

[Say], “Then is it other than Allah I should seek as judge while it is He who has revealed to you the Book explained in detail?” And those to whom We [previously] gave the Scripture know that it is sent down from your Lord in truth, so never be among the doubters. (Al-An`am 6:114)

14) Why did Allah send messengers?

And We did not send any messenger except to be obeyed by permission of Allah.  (Al-Nisa’ 4:64)

15) Do we have to believe in all the messengers?

The Messenger has believed in what was revealed to him from his Lord, and [so have] the believers. All of them have believed in Allah and His angels and His books and His messengers, [saying], “We make no distinction between any of His messengers.” And they say, “We hear and we obey. [We seek] Your forgiveness, our Lord, and to You is the [final] destination.” (Al-Baqarah 2:285)

16) What happened to the previous scriptures?

Among the Jews are those who distort words from their [proper] usages and say, “We hear and disobey” and “Hear but be not heard” and “Ra`ina,” twisting their tongues and defaming the religion. And if they had said [instead], “We hear and obey” and “Wait for us [to understand],” it would have been better for them and more suitable. But Allah has cursed them for their disbelief, so they believe not, except for a few. (Al-Nisa’ 4:46)

17) Who is the last messenger?

Muhammad is not the father of [any] one of your men, but [he is] the Messenger of Allah and last of the prophets. And ever is Allah, of all things, Knowing. (Al-Ahzab 33:40)