Trinity between Paganism and Christianity 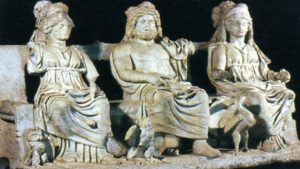 Though Christianity was supposed to have come to complement the previous heavenly messages, combat and replace the polytheistic paganism, we observe that the contemporary Trinitarian Christianity in its current form and since the Council of Nicaea held in 325 A.D. up to date is nearer to the polytheistic paganism and farther from the monotheistic heavenly messages, including the previous ones, mainly Prophet Moses’ message (Judaism), and the final message of (Islam) brought by Prophet Muhammad.

The Heavenly Messages’ Attitudes towards the Trinity

We do not come across any origins of the contemporary doctrine of the Trinity in the divine messages of the previous prophets or the subsequent message of Prophet Muhammad in the light of the Jewish scriptures, especially the Hebrew Bible called “Tanakh”, the Muslim holy book, namely the Qur’an and even the Christian scriptures called the “Bible” including the Old Testament and the New Testament.

This false doctrine is foreign to the true religion of God as introduced by prophets every time and everywhere according to the current scriptures despite the distortion caused to the Jewish and Christian scriptures. In the Tanakh, the Qur’an and the Bible itself, we only find out a clear-cut, explicit call to pure monotheism. The examples of such a frequent call is even too numerous to be enumerated here.

However, about pure monotheism in the Tanakh, for example, we read: “Hear, O Israel: The Lord our God is one Lord.” (Deuteronomy 6:4)

About pure monotheism, in the Qur’an, for example, we read:

And your god is one God There is no deity [worthy of worship] except Him, the Entirely Merciful, the Especially Merciful (Al-Baqarah 2:163)

About pure monotheism, in the Bible itself, for example, the New Testament quotes Jesus as saying: “Get thee hence, Satan! For it is written: ‘Thou shalt worship the Lord thy God, and Him only shalt thou serve.’” (Matthew 4:10)

Accordingly, it becomes clear that the alleged doctrine of the Holy Trinity has no scriptural basis either in Judaism, Islam or Christianity itself. It originates only from the blind Christian tradition which derived this false creed from the Council of Nicaea and the subsequent ecumenical councils.

Regardless of the scriptural basis, this bizarre doctrine contradicts the simplest axioms of logic and reason. The following are the most basic questions to be asked in this regard:

Does it sound reasonable that God did not tell His servants from Adam to Jesus that He has three persons, including Jesus himself, and that those three persons deserve worship?

Does it sound logical that humanity remained ignorant of the alleged three persons until the First Council of Nicaea was held in 325 A.D.?

How come the Christian clergymen differ at all early ecumenical councils over the divinity of those three persons?

Is it palatable that God dropped the two persons of “the Son” and “the Holy Spirit” from the final message of Islam brought by Prophet Muhammad?

What about the millions of human beings who lived and died before the advent of Jesus’ message and did not know that God allegedly has three persons, including Jesus himself, and that they had to worship those three persons?

What about the millions of human beings who have come after the advent of the final message of Islam brought by Prophet Muhammad and found out that the alleged three persons have no basis except in the sight of the followers of only one heavenly message, namely the contemporary Christianity, out of numerous heavenly messages, none of which makes any mention of those persons?

Let’s plunge into the depths of history in order to explore the historical roots of the alleged doctrine of the Holy Trinity, of which the three main heavenly messages are devoid, in the light of their current scriptures despite the distortion caused to most of them.

The Historical Roots of the Trinity

Jesus’ message was preached in time and space polarized by two main theistic belief systems, one of them is monotheistic and heavenly, namely Judaism, which is a mixture of the heavenly messages revealed to the prophets of the children of Israel, especially Prophet Moses. The other was polytheistic and idolatrous, namely the paganism with which the earth, including the Roman Empire itself, was rife at the time.

Jesus’ message was supposed to be such a monotheistic extension of the previous heavenly messages which was expected to alleviate the materialism which characterized the children of Israel and, at the same time, combat the polytheistic paganism which was dominant on the earth at the time.

However, unfortunately, the universal norm of change on earth applied. Thus, Jesus’ message was subject to the corruption and alteration to which the previous messages were subject. But, in this time, several factors played a very dangerous distortive role which brought Jesus’ message out of its monotheistic context and aligned it with the false polytheistic, pagan faiths.

The stated factors include the miraculous factor which beset Jesus’ life both upon his birth without a human father and his Ascension without the end of lifetime.

The last factor is that of the polytheistic pagan environment which was predominant during and a long time after Jesus’ mission.

However, the true shift from the original monotheistic Christianity to the polytheistic Trinitarian paganism took place only when the Roman Empire under Constantine I’s command procured the last factor, that is, the environment factor as represented by the milieu supporting the polytheistic Trinitarian paganism in its war against the original monotheistic Christianity in the Council of Nicaea held in 325 A.D.

The Roman Empire was a polytheistic pagan realm which never professed monotheism in most if not all of its times. Such an idolatrous dominion used to embrace polytheism, as this was a prevalent belief in most of the Roman territories, as well as the neighboring and contemporaneous countries and civilizations both in the East and the West.

No wonder, this belief was bequeathed by the past empires and civilizations. Therefore, monotheists, mainly the Jews, were very few in number vis-à-vis multitudes of polytheists including pagans and idolaters as represented by most of the then peoples, civilizations and cultures.

Ancient Trinitarian temples still exist in Rome, the historical metropolis of the Roman Empire, as conclusive evidence for the dogmatic plagiarism and the religious shift which took place from the original monotheistic Christianity to the contemporary Trinitarian Christianity.

There is no denying that such Capitolia used for the worship of pagan triads were widespread across the Roman domain. No wonder, the Trinity was a predominant belief in the Roman Empire for long stretches of time, including the timespans preceding and coinciding with the profession of Christianity by the Roman Empire, not to mention the fact that belief in the Trinity was commonplace in neighboring, contemporaneous and even past cultures and civilizations.

Instances of the Trinity in the Roman History

The Romans did not believe in the Trinity in only one point in their history, but at several, successive points of the Roman history as follows:

The earliest known triad in which the Romans believed was “the Archaic Triad” which consisted of: 1- Jupiter: the king of gods, 2- Mars: the god of military prowess and a war deity, and 3- Quirinus: the enigmatic god of the Roman populus (“people”).

This triad antedated the establishment of the Roman Empire. The exact time this triad was worshipped is unknown.

The Capitoline Triad was a group of three deities who were worshipped in the ancient Roman religion in an elaborate temple on Rome’s Capitoline Hill (Capitolium).

Jupiter, Juno and Minerva were honored in temples known as Capitolia, which were built on hills and other prominent areas in many cities in Italy and the provinces, particularly during the Augustan and Julio-Claudian periods. Most had a triple cella.

Instances of the Trinity before the Roman Republic

Umbria was a region located in Central Italy. The regional capital was Perugia. This region was named after the Umbri people who settled in this region in the 7th century BC.

According to Georg Wissowa in his manual of the Roman religion, the Umbri people had a holy triad that they used to worship in Iguvium (Gubbio). This triad was: “love, Marte and Vofionus”.

The Etruscan civilization is the modern name given to a powerful and wealthy civilization of ancient Italy in the area corresponding roughly to Tuscany, Western Umbria, and northern Lazio in the 7th century BC.

In the beginning, the Etruscan civilization worshipped the following triad: “Aritimi (Artemis), Menrva (Minerva) and Pacha (Bacchus)”. In the course of time, the above triad was changed to: “Tinia, Uni and Menrva”, which is equivalent to the Roman triad: “Jupiter, Juno and Minerva”.

Ancient Greece was a civilization belonging to a period of Greek history from the Greek Dark Ages of the 12th–9th centuries BC to the end of antiquity (c. 600 AD). Immediately following this period was the beginning of the Early Middle Ages and the Byzantine era.

Classical Greek culture had powerful influence on ancient Rome, which carried a version of it to many parts of the Mediterranean Basin and Europe. For this reason, Classical Greece is generally considered to be the seminal culture which provided the foundation of modern Western culture and is considered the cradle of Western civilization.

The ancient Greeks were such polytheistic people who used to worship numerous gods in the form of triads. The neighboring, both contemporary and subsequent, civilizations, like the Roman civilization, borrowed the Trinity from the ancient Greeks in different forms and names.

Click this link to review the numerous triads the Greeks had worshipped before conversion to Christianity.

We observe that the Romans borrowed the Trinity from the ancient civilizations with slight changes in names. In the beginning, the Romans worshipped the triad consisting of “Jupiter, Mars and Quirinus”.

Then, they retained Jupiter and replaced the other two gods with Jupiter’s family, including Goddess Juno, Jupiter’s sister and wife, and Goddess Minerva, his daughter. So, the new triad became “Jupiter, Juno and Minerva”.

The Roman Empire continued to worship this triad until it converted to Christianity. Thereupon, they replaced “Jupiter” as the king of gods with “Father” and replaced Jupiter’s family, including Juno and Minerva, with a new family, including the Son and the Holy Spirit.

Thus, the Romans worshipped a new, albeit old, triad consisting, as usual, of a king of gods and his family. So, the Christian triad was formed as follows: “Father, Son and Holy Spirit”.

This may decipher the Roman Catholic Church’s exaggerated sanctification of Lady Mary, the Virgin, as it believes, inter alia, that she is Jesus’ partner in salvation. Before conversion to Christianity, they used to believe in a king of gods as well as his wife and the mother of his children.

That is why the Roman Catholics sanctify Mary after conversion to Christianity and give her some divine attributes though it is not included in the new triad.

One thought on “Trinity between Paganism and Christianity”

What an amazing piece! Thank you for your efforts.