The Truth about God Between Christianity and Islam

Journey to search for God

From the starting point, Man lived long-lived psychological conflict for answering many questions:

Who created the universe? Why should I live in it? How I came for it?

Utilizing potentials (i.e. mind, body and natural resources, etc.,) provided to him by his unknown God, man began to fetch for God in the universe to answer these questions. 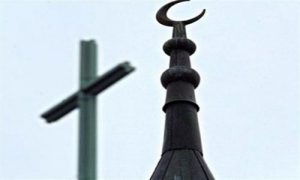 Islamic Message and the People of The Scripture (Jews and Christians)

Some people derived the nature of God and the view of Him from the nature of the universe according to the most powerful as manifested in Greek, Roman, Indian cultures. Therefore, the concept of God was mixed up with legends and myths.

Some people saw themselves the masters of the universe and claimed that the universe was not in need to god and became atheists.

Light of Prophethood and Message

The situation remained until the light of prophecy came and God sent the Apostles to present Himself to mankind, save them from misguidance and answer those questions.

In the face of such new experience, people maintained several stands: some of them did not respond to the Apostles and did not care for the message. They rejected the right categorically. Others responded to the call and utilized God-given intellectual potentials to know the truth.

The Apostles encountered obstacles in the way of calling for the unification of God. Many People rejected the call under the pretext of following parents, grandparents and traditions ,in addition to, bad psychological-morals of pride.

Islamic Message and the People of The Scripture (Jews and Christians)

Prophet-Muhammad (PBUH) appeared while -the people of the Scripture were sticking to their faiths, as inherited from their fathers. Their faith and doctrines were reinforced by rulers and clergymen of priests and monks. No one was allowed to think of or oppose such doctrines.

Prophet Muhammad (PBUH) began to call them to the oneness of God (Allah) and recited the words of Allah in the Qur’an which describe God:

Idol-Worshipers who were called for guidance were influenced by the customs and traditions of parents and grandparents; they justified their deviation by saying, “But we found our fathers doing thus”. And said,

“Indeed, we found our fathers upon a religion, and we are, in their footsteps, following.” (43:23)

The laymen of the people of the Scripture (Jews and Christians) arrogantly followed clergymen, priests, monks and kings who arrogantly refused to accept the truth despite having the knowledge of their books showing the appearance of Prophet Muhammad (peace be upon him) after Prophet Jesus (peace be upon him) to reinforce the latter’s message. The Qur’an records their position:

“O People of the Scripture, why do you disbelieve in the verses of Allah while you witness [to their truth]?”(3:70).

The Qur’an resorted to logical premises by drawing their attention to the miracles of the universe, the creatures and the fate of former nations, and the apprehension of polytheism  by sound minds:

“Had there been within the heavens and earth gods besides Allah, they both would have been ruined. So exalted is Allah, Lord of the Throne, above what they describe”.(21:22)

“Say, “Who is Lord of the heavens and earth?” Say, “Allah.” Say, “Have you then taken besides Him allies not possessing [even] for themselves any benefit or any harm?” Say, “Is the blind equivalent to the seeing? Or is darkness equivalent to light? Or have they attributed to Allah partners who created like His creation so that the creation [of each] seemed similar to them?” Say, “Allah is the Creator of all things, and He is the One, the Prevailing”.(13:16)

It highlights the relationship between the Qur’an and their books as being certifying their teachings and dominating them in the sense of rectifying them and showing deviations in them. God ‘(Allah) says:

“And We have revealed to you, [O Muhammad], the Book in truth, confirming that which preceded it of the Scripture and as a criterion over it. So judge between them by what Allah has revealed and do not follow their inclinations away from what has come to you of the truth..” (5:48).

The Christian view of God

The Qur’an, moreover, shows the grave mistakes the people of the book got in while viewing God saying:

Those ayas show the true God who is one in His divinity, His attributes, and His self-power. According to the ayas, Allah (God) did not give birth, and He was not born. He has no equal or partner. He is the Creator, the One giving provision to His Creatures, Who has no one to look like Him. He, moreover, is the All-Knowing. There is nothing like unto Him, and He is the All-Hearing, the All-Seeing.

These proofs touched the hearts of the people who had sound hearts and minds and attracted them to the right to believe in God (Allah). Among those people was Abdullah ibn Salam, a great rabbi at the time of Prophet Muhammad who believed in his message.

There are, on the other hand, those who opposed the right and did not pay heed to the message. They are deemed “deviated” according to the Qur’an:

“Say, “Whoever is in error (or deviation) – let the Most Merciful extend for him an extension [in wealth and time] until, when they see that which they were promised – either punishment [in this world] or the Hour [of resurrection] – they will come to know who is worst in position and weaker in soldiers.” (19:75)

“Then the factions differed [concerning Jesus] from among them, so woe to those who disbelieved – from the scene of a tremendous Day.”( Qur’an 19:37).

Despite clear distortion of the word of God and such a monotheistic sincere message, there are some texts in the Bible testifying to the truth:

Throughout history, the teachings of Christ, after his death, have been subject to distortion. Christians were differed and divided after his demise. They differed as regards to the nature of God and settled their doctrine on the tripartite doctrine.

Egyptian, Ethiopian, Armenian, Syriac, Orthodox Churches upheld god’s one nature which is the divine. Other churches upheld the two natures of Christ.

The Lebanese Maronite Church separated from the rest of the Churches to say that: although God has two natures, He has one will, which is the divine. Therefore, the majority of Christians upheld the two natures of God and two wills for  Him.

This article attempts to explore the nature of God between Christianity and Islam and the two religions’ views and the closest one to the right.

The reader notes the difference between the monotheistic view of Islam and the Christian view of God according to the different foundations of the two views. These differences came in several respects.

Islam, in its view of God, maintains the sanctity of God, which precludes humiliation and deficiency as regards to, God and His oneness. It rejects the polytheistic view of attribution of children or wives to him. It, furthermore, rejects polytheism in general—A view which is compatible with logic. In contrary, the Christian illogical view was full of conflicts and deviated from the teachings of Christ.