There has been much debate on the subject of celibacy for Christian clergy or monks in Christian circles at present. There are two groups of Christian leaders in the West on the topic; one of them sees allowing married clerics to work as a monk in the churches while another group opposes the idea considering the step as a violation to the inherited old tradition in the church system.

“And We placed in the hearts of those who followed him compassion and mercy and monasticism, which they innovated; We did not prescribe it for them except [that they did so] seeking the approval of Allah. But they did not observe it with due observance. So We gave the ones who believed among them2 their reward, but many of them are defiantly disobedient”. (57:27)

Monasticism is the religious practice of living apart from the world, usually secluded in a community of like-minded people, to avoid sin and grow closer to God.(1) 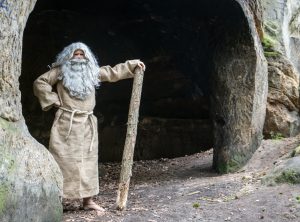 An imaginary image of a Christian hermit practicing monasticism in a cave. Although some early Christian practices of Monasticism have disappeared, the main form of Monasticism has been in the scene, represented in Christian Clergy-Celibacy–a practice miraculously rectified by the perfect message of Islam.

Celibacy, or turning away from marriage is one of the most important elements of monasticism as most of the worldly affairs branch out from the family and offspring.

The Glorious Qur’an has informed in this context about two important things: One of them is that celibacy never was an obligatory duty ordained by Allah the Almighty; rather it was an innovation by the Christian monks to achieve nearness to God. The second is that some Christian devotees could not adhere to the monasticism, and failed to abide by this strict way of life. This statement by the Glorious Qur’an is a clear miracle in revealing the truth about the past of the Christian celibacy and a miracle in revealing what was hidden in the future of the celibacy. The Holy Qur’an has talked about that in clear words. The point of miracle is: how the unlettered Prophet Muhammad (peace be upon him) was able to know accurately about the past and the future of Christian celibacy?  In that era, an unlettered Prophet Ummi Nabi tells about what happened in the past on the celibacy system in Christianity? How is the way to tell about that, and if it were not a revelation from God the Almighty, this would not be possible.

Now, we will talk about the Christian celibacy in the past and the issue of celibacy in Christian circles in the present era, so that the feature of miracle will become evident and clear.

When did Christian Celibacy begin?

Christian monasticism got its start in Egypt and North Africa about 270 AD, with the desert fathers, hermits who went into the wilderness and gave up food and water to avoid temptation. One of the earliest recorded solitary monks was Abba Antony (251-356).

Dr. Hanin Abdul-Masih verifies in the introduction to his book on the Christian celibacy saying: “The biggest and most dangerous heresy that the Orthodox Church has known is the heresy of monasticism that Christianity did not know before the fourth century and which came out from the Coptic Orthodox Church and moved to the rest of the Orthodox Churches, but also the Catholic Church was not safe from monasticism and its destructive principles and its misleading teachings except the evangelical Protestant Church, which adhered to the teachings of the Gospel and took the Gospel as a light and lamp for its way.”(2)

This quote clearly denotes that monasticism is not an original part of the Christianity; rather, it is a heresy that has been invented in the fourth century CE. This quote verifies the statement of the Glorious Qur’an on the celibacy. However, some Christian writers regard monasticism as an inseparable part and essence of the Christian clergy system.

This is the first aspect of the miracle of the Noble Qur’an in telling about the past of the Christian celibacy in that time, noting that the Prophet Muhammad (peace and blessings be upon him) never read or write and he was unlettered from his birth, however, his illiteracy was based merely on divine wisdom and therefore it has been regarded a sort of perfection for him when compared with others.

This aspect is more evident, recent and more convincing, because it has become now a sensitive issue and hot topic. In fact, the churches are in dire need of traditional celibate priests while such priests are less in numbers and many churches have become without priest.

In this context, there are two important points in revealing the miracle of the Glorious Qur’an regarding its statement on the Christian celibacy:

The first is that imposing strict celibacy on monks, nuns and priests led in the modern era to great calamities in the churches and terrible sexual scandals amongst the church leaders. This article does not have much space to mention the sexual scandals in the churches; just it is enough to search on the internet and what is published daily in newspapers is adequate.

The other point is the ongoing debates on the subject of celibacy amongst the church leaders and urgent appeals to allow married monks to work in the churches, to keep them away from sexual scandals, as well as to provide the necessary number of monks and meet the needs of the churches in many countries.

A lot of news has been published and many press analyzes have appeared on various websites on the Internet, and we will present some of them here.

One of the news says:

“The Pope thinks that there is a room to consider some exceptions for clergy-marriage in the Latin rites “when there is a pastoral necessity” in remote locations due to lack of priests, such as in the Pacific islands.”

“Pope Francis who is right now considering allowing an exception to priestly celibacy by the ordination of proven married men, so-called viri probati, in the Amazon region in response to severe priest shortages.” (3)

While the proposal to allow the ordination of married men garnered a clear majority of synod participants, the issue of married clergy was a focal point of debate during the weeks of the synod.(4)

Catholic leaders approve proposal that would allow some married men in the Amazon to be ordained as priests.

The proposal, which must be approved by Pope Francis, would be a historic change to the church’s centuries-old tradition of unmarried priests. It passed by a vote of 128-41 and applies only to some churches in the Amazon region that are experiencing a shortage of priests. The region includes parts of Bolivia, Brazil, Colombia, Ecuador, French Guiana, Guyana, Peru, Suriname and Venezuela. (5)

Some commentators have commented on the issue and in my opinion the comment is realistic, as he said:

“I don’t care about priests being married. The church shouldn’t allow homosexuals and child molesters into the priesthood. I think Pope Emeritus Benedict XVI greatly influenced Pope Francis’ decision. Better to have married priests than child molester priests. What is the pope thinking?”

Is Celibacy Coinciding with Sexual-Instinct for Human Beings?

There is no doubt that celibacy for the monks was a heresy in the Christian religion, as human being has been created on some innate instincts, including; eating, drinking, urinating and defecating, also the most important of them is sexual instinct, keeping in mind that a true religion revealed from God does not suppress the instinct of sex, rather, it orders it to be used in the legitimate manner and within the framework of common taste,  in accordance with the social norms and general modesty.

Whatever it may be, the Christian celibacy at first is an invented practice and heresy and the statement of the Holy Qur’an is one-hundred percent true about the past of the celibacy. The miracle of the Noble Qur’an did not end on the past, but its miracle still continues and does not stop, even in the current era, as we will see in coming lines. And this is the second aspect of the Qur’anic miracle.

Marriage: A Practice of Prophets and Messengers

In addition, marriage has remained the Sunnah or practices of the Prophets and Messengers since the Prophet Adam (peace be upon him) up to our master the Prophet Muhammad (peace and blessings be upon him) as Allah the Almighty has said:

“We sent messengers before you, and We assigned for them wives and offspring. No messenger could bring a sign except with the permission of God. For every era is a scripture”. (13:38)

Why Did Not Christ (Isa or Jesus) Marry?

As for the abstinence of the Prophet Isa (Jesus) (peace be upon him) from the marriage, perhaps, it was for another reason that Allah the Almighty might have commanded him by revelation, in addition, celibacy is not a requirement for the Prophethood, as most of the prophets and messengers had wives and children as Allah the Almighty has informed in the Glorious Qur’an. (6)

In addition, it has been said that when the Prophet Isa (Jesus) (peace be upon him) will come down from sky near the end of the world he will marry a woman from the tribe of Banu Juzam (an Arab tribe in Yemen). (7)

First: The Holy Qur’an has talked about the Christian monasticism.

Second: Monasticism is renouncing the worldly affairs to seek nearness to God, and one of the most important parts of it is celibacy.

Third: Monasticism has never been the core of the Christian religion.

Fourth: Monasticism is a human innovation or heresy invented by man.

Fifth: The monks have failed to abide by the celibacy.

Sixth: Monks are still failing to abide by the celibacy even today.

Seventh: The statement of Holy Qur’an is true in describing it with heresy, and it is a proof for miracle.

Eighth: The miracle of the Noble Qur’an remained constant and ongoing.

Ninth: The Prophet Muhammad (May peace and blessing of Allah be upon him) was Ummi (unlettered), and there was no source for his knowledge except Allah the Almighty.

Tenth: The truthfulness of the Holy Qur’an’s statement about the past and present is evidence for the genuineness of the Prophet Muhammad (May peace and blessing of Allah be upon him).

Eleventh: Monasticism led to corruption and sexual scandals as it is known today. And the Glorious Qur’an has pointed to that. You can read the following statement of Qur’an:

“So We gave the ones who believed among them their reward, but many of them are defiantly disobedient.” (57:27)

(6) See: Tafsir al-Tahrir wa’l-Tanwir by Muhammad al-Tahir ibn Ashur under his commentary on (57:27).