Although Muslims don’t deny Prophet Isaac’s Prophecy, but the Promised Son for them was Prophet Ishmael (the father of Arabs), from whom Prophet Muhammad arose as the last Prophet.

Muslims don’t believe that the Old Testament and the New Testament are the word of God, but they believe that both have a valid source which is the Torah and the Gospel (God’s revelations to the Prophets Moses and Jesus Christ). Therefore, some parts of them are from God and others not. Both the Old Testament and the new testaments suffered severe changes to hide the truth of the Prophecy of the coming Prophet Muhammad and the importance of the city of Makkah, and for many other reasons. 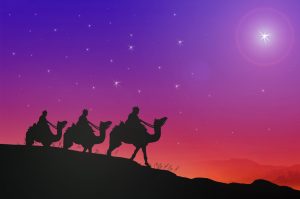 The following explanation can help many to understand what that means:

“On that day the Lord made a covenant with Abraham and said, ‘To your descendants I give this land, from the Wadi of Egypt to the great river, the Euphrates.’” (Genesis 15:18)

All the descendants of Prophet Ishmael settled in Arabia, this area is located between the Nile and the Euphrates.

“His descendants (Ishmael) settled in the area from Havilah to Shur, near the eastern border of Egypt, as you go toward Ashur,.. “(Genesis 25:18)

Havila, according to the Bible placed in southwest Arabia, while Ashur is located on the north-eastern border of Egypt, and Ashur was the capital of the Old Assyrian Empire (Iraq today).

Therefore, the descendants of Ishmael settled this area extending south of the Hijaz (Arabia) and north, which includes the land of Paran (Makkah according to the Bible), which was inhabited by Ishmael.

Hagar Is A legal Wife To Prophet Abraham

“So after Abraham had been living in Canaan ten years, Sara his wife took her Egyptian slave Hagar and gave her to her husband to be his wife.” (Genesis 16:3)

Ishmael Is A Legal Son To Prophet Abraham

Ishmael means ‘God hears.’ That God accepted the supplication of Abraham to give him a son.  The name Ishmael was chosen by God. It was never mentioned in the Old Testament that Ishmael was an illegitimate son.

“The angel of the Lord also said to her: ‘You are now pregnant and you will give birth to a son. You shall name him Ishmael, for the Lord has heard of your misery.’” (Genesis 16:11)

“And as for Ishmael, I have heard you: I will surely bless him; I will make him fruitful and will greatly increase his numbers. He will be the father of twelve rulers, and I will make him into a great nation. “ (Genesis 17:20)

“Some time later God tested Abraham. He said to him, ‘Abraham’ ‘Here I am,’ he replied. Then God said, ‘Take your son, your only son, whom you love—Isaac—and go to the region of Moriah. Sacrifice him there as a burnt offering on a mountain I will show you.’”(Genesis 22:1-2)

A contradiction was found here; it is mentioned that ‘take your only son Isaac’. Ishmael was the only son of Prophet Abraham for fourteen years, till the birth of Prophet Isaac. When Isaac was born, Abraham had two sons. The name of Ishmael was changed to Isaac. But the word ‘only’ preserved by the mercy of God to show us the truth.

According to the biblical verse below Hagar and Ishmael were sent a way because of Sara’s jealousy. In Islam this incident happened because of God’s plan and it took place before the birth of Prophet Isaac. By reading the following biblical verses we can understand that the Islamic version of the story is more accurate.

“The child grew and was weaned, and on the day Isaac was weaned Abraham held a great feast.  But Sarah saw that the son whom Hagar the Egyptian had borne to Abraham was mocking, and she said to Abraham, ‘Get rid of that slave woman and her son, for that woman’s son will never share in the inheritance with my son Isaac.’” (Genesis 21:8)

“Early the next morning Abraham took some food and a skin of water and gave them to Hagar. He put the child upon her shoulders and then sent her off with the boy. She went on her way and wandered in the Desert of Beersheba.  When the water in the skin was gone, she put the boy under one of the bushes.” (Genesis 21:14-15)

Abraham was 86 years old when Ishmael was born.

And he was one hundred years old when Isaac was born.

“Abraham was a hundred years old when his son Isaac was born to him.” (Genesis 21:5)

It is concluded that Ishmael was fourteen years old when Isaac was born. This is because as mentioned, the incident happened after Isaac was weaned, and their tradition was that the child is weaned about the age of three. Therefore, when Hagar and Ishmael moved, Ishmael was a full grown teenager of about seventeen years old. A teenager can’t be lifted up and to be put under the bushes, according to biblical verse Ishmael must have been a baby not a teenager. Therefore, according to Muslim’s point of view it is another contradiction in the Old Testament.

Ishmael Was Circumcised  Before  The Birth Of Isaac

Abraham, Ishmael, and the men of Abraham’s family were circumcised, but Isaac was not born at that time. Isaac was born a year later, and he was circumcised at the age of eight.

So when the covenant was made (circumcision and sacrifice) Abraham was ninety-nine and Ishmael was thirteen. Isaac was born a year later, when Abraham was one hundred years old.

Abraham Is A pure Monotheist

Prophet Abraham is the ancestor of Judah, Judah whom the Jews came from, is a descendant of Prophet Abraham, so Abraham cannot be a Jew simply because he is not a follower of Judah.

“Abraham was neither a Jew nor a Christian, but he was one inclining toward truth, a Muslim [Monotheist]. And he was not of the polytheists.” (Qur’an 3:67)