The Concept of Family Between Christianity And Islam

Family is the foundation for society, which, subsequently, constitutes nations. No wonder there is the World Family-Day.

Heavenly religions gave much importance to family. Therefore, this article explores the family between Islam and Christianity.

Marriage is the starting point for family. Heavenly religions applaud marriage and urge people to marry. The Bible says, 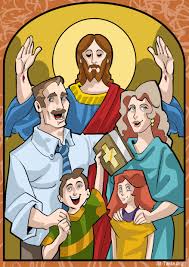 The LORD God said, “It is not good for the man to be alone. I will make a helper suitable for him.”(Genesis: 2/18)

“So God created mankind in his own image, in the image of God he created them; male and female he created them. God blessed them and said to them, “Be fruitful and increase in number; fill the earth and subdue it. Rule over the fish in the sea and the birds in the sky and over every living creature that moves on the ground.” “( Genesis: 1/27-28 ).

In his book Family System Between Christianity and Islam, Comparative Study, M. Abd Al-Sami Shalan, records many Christian definitions for marriage. Blaniwi defines marriage in Christianity as, “A contract between a man and a woman laying the foundation for a coalition admitted by law which they cannot dissolute themselves”.

In his book Al-Majma Al-Safawi, Ibn Al-‘Assal defines it as, “An apparent agreement between man and a woman accompanied by prayers, and testified by priests. The two (fleshes i.e. bodies) are combined in a certain rite to help both of them fulfill their necessities i.e. desires and have offspring”.

There are Eastern-Christian definitions which view marriage as a sacramental and great divine secret mentioned in the Bible (Ephesians 5/31-32).

Both of the religions, Christianity and Islam agree on the need for a familiar and kind bond between the spouses and that the spouses should respect the marriage-contract. In Christianity, a woman must obey her husband and man should love her because as Christ is “the head of the church”, man is “the head of woman as well” (Ephesians 5:23).

The same case applies to Islam which, however, along with its comprehensive and tolerant legislation, gives much importance to the spousal kind-relationship in comparison to Christianity.

Shalan criticizes the definition by Ibn al-‘Assal as “containing ecclesiastical proclamations that were added to the marriage contract to justify priesthood-domination through the requirement the church’s testimony to the marriage-contract”. Therefore, he says: “The Bible does not mention, in any of its texts that the marriage-contract should be held by the priests with specific prayers and rites. It seems that the Church introduced such liturgies later to get more financial resources.”

Shalan, moreover, points out that the definition neglects the marital psychological aspects and gives much importance to off-spring. The definition, according to him, also contradicts the practice of the Church in the rituals of marriage.

Marriage and Divorce in Christianity and Islam

Islam, on the other hand, rejects such stipulations. In Islam, marital-contract is built on facilitation. It only requires two witnesses and the attendance of the woman’s guardian to undertake the marital-contract. The contract should not adhere to the place of worship or to the clerics.

In fact, the Islamic view of marriage is comprehensive. Marriage is regarded as a “contract between the spouses which legalizes sexual-relationship and guarantees mutual rights and duties between the two parties”.

Islam’s plan for family starts from the moment of birth through ensuring the moral guidance and proper and righteous sexual relationship between men and women.

Marriage is a contract that is seen by Islam as a strong, documented contract, Allah (God) says,

Islam forbids the violation of woman’s rights and rejects the biblical view of woman as the “cause of sedition in the first disobedience in history”. It prohibits taking the wife’s rights and dowry unlawfully:

“But if you want to replace one wife with another and you have given one of them a great amount [in gifts], do not take [back] from it anything. Would you take it in injustice and manifest sin?”. (4 / 20)

“and give them their due compensation according to what is acceptable. ” (4/25)

Here are biblical texts on marriage and divorce in the Bible to illustrate this concept according to Christian view:

“If a man marries a woman who becomes displeasing to him because he finds something indecent about her, and he writes her a certificate of divorce, gives it to her and sends her from his house”.

It is clear from the previous text that the marital relationship in Christianity is eternal. However, the Christian societal demands forced churches to succumb to the demands of the masses in the form of the annulment, or disintegration of the marriage-contract.

Some countries, such as Egypt, resorted to introducing new laws under certain new conditions for the annulment of the marriage-contract. The divorce- term is replaced by the “dissolution of marriage-contract due to death, atheism, change of the Christian religion or doctrines that are not recognized by the Christian churches or and 6 cases of so-called “forms of adultery”.

The Christian view of marriage is also condemned by Islam for enacting laws excluding the monks and men of the church of such natural instinctive through monasticism. Islam declares the act to be a violation for proper legislation and the rights of human disposition. Churches, moreover, claimed that the one able to be away from fornication, may not marry unlike Islam, on the contrary, which recommends marriage.

They moreover claimed that it is not permissible for man to marry more than one woman. Orthodox, moreover, legalized divorce only in the case of adultery-commitment and prohibited remarriage after divorce:

“…then her first husband, who divorced her, is not allowed to marry her again after she has been defiled. That would be detestable in the eyes of the LORD. Do not bring sin upon the land the LORD your God is giving you as an inheritance.”(Deuteronomy24/4).

The Bible, furthermore, sets forth an incomprehensive view of marriage due to the human interference with legislation related to it. Islam, on the other hand, controls the marriage-relationship systematically. It ensures psychological rehabilitation for the couple before marriage and educational rehabilitation of the Muslim by spreading good morals in dealing with the opposite sex.

Islam is the religion that came to fit and harmonizes human nature instinct, and disposition; its legislation is based on easiness and tolerance:

The Prophet of Islam considers marriage as his Sunnah (Proper Way which should be followed),

“Marriage is of my Sunnah. Whoever, does not follow my Sunnah is not of my followers”.

According to Islam if life becomes impossible between the two couples and they hated each other, they should not be coerced to live with each other each in the marriage bond. Allah says,

“But if they separate [by divorce], Allah will enrich each [of them] from His abundance. And ever is Allah Encompassing and Wise”. (4/130)

Islam enjoins the couple to live with virtue:

“And live with them in kindness. For if you dislike them, perhaps you dislike a thing and Allah makes therein much good..”. (4/19)

It also urged the parties to sacrifice some rights in order to preserve this relation. Allah (glory be to him) says,

“And if a woman fears from her husband contempt or evasion, there is no sin upon them if they make terms of settlement between them – and settlement is best. And present in [human] souls is stinginess. But if you do good and fear Allah – then indeed Allah is ever, with what you do, Acquainted. “(4/128)

The Islamic concept of marriage pays attention to the psychological aspects and the purpose of the marriage is to achieve reassurance:

“And of His signs is that He created for you from yourselves mates that you may find tranquility in them; and He placed between you affection and mercy. Indeed in that are signs for a people who give thought. ” (30/21).

Islam takes care of the needs of human beings and the nature of every individual. It does not prohibit polygamy categorically and does not legalize it categorically.  It stipulates conditions for it including the observance of justice and fairness in dealing with multiple wives. Allah (glory be to him) says,

“And you will never be able to be equal [in feeling] between wives, even if you should strive [to do so]. So do not incline completely [toward one] and leave another hanging. And if you amend [your affairs] and fear Allah – then indeed, Allah is ever Forgiving and Merciful”. (4/129)

Christianity prohibits polygamy and deems it unacceptable. In the New Testament, Jesus called for monogamy. Today, most Christian denominations reject polygamous marriage, which is unreasonable.