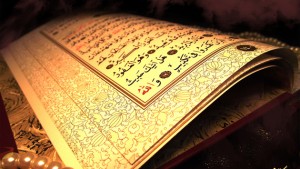 It is eccentric enough that some Christian apologists argue that there are synoptic Qur’ans like synoptic gospels to prove that there is nothing wrong with having more than one gospel. It is more eccentric that even such synoptic gospels portray different views even of the most basic tents of Christianity contained in the New Testament like the picture of Jesus, his mother Mary and Jesus’ teachings.

As a matter of fact, the so-called synoptic gospels cannot stand comparison with the Qur’an. It is quite unfair to draw a historical comparison between the Qur’an and the above-mentioned gospels for an uncountable number of reasons. However, I will try here to cite only a few reasons why it is a sophism to liken such synoptic or any other gospels to the Qur’an and argue that there is only one Qur’an throughout history.

Before handling the Qur’an and evidencing its textual integrity, it is convenient here to give some facts about gospels in general and synoptic gospels in particular.

Though there were gospels which were circulated in early Christianity, but they did not become canonical. Of the many gospels written in antiquity, only four gospels came to be accepted as part of the New Testament or canonical. Much literature, such as the work known today as Gospel of Thomas, lacks the narrative framework typical of a gospel. Canonical gospels specifically refer to the four books selected as canon by the early church.

Biblical scholars generally agree that early oral traditions about Jesus along with collections of accounts preceded the canonical gospels. Reza Aslan states that “the gospels were deeply influenced by Paul’s letters.” The dedicatory preface of the Gospel of Luke testifies to the existence of several accounts of the life of Jesus by the time of its composition. The term Luke uses (διήγησις diēgēsis) is a term used in classical Greek for any historical narrative.

It is widely believed that the three synoptic gospels derive from a common source or set of sources, and that they directly or indirectly borrowed from or were influenced by each other. For example, the vast majority of material in Mark is also present in either Luke or Matthew or both, suggesting that Mark was a source for Matthew and Luke. The existence of common material in Matthew and Luke not contained in Mark suggests that both Matthew and Luke had at least one other source at their disposal.

The majority view today is that Mark is the first gospel, with Matthew and Luke borrowing passages both from that gospel and from at least one other common source, lost to history. This view is known as the “two-source hypothesis”. The two-gospel hypothesis, in contrast, says that Matthew was written first (by Matthew the Apostle), and then Luke the Evangelist wrote his gospel (using Matthew as his main source) before Mark the Evangelist wrote his gospel (using Peter’s testimony). John was written last and shares little with the synoptic gospels.

The consensus among biblical scholars is that all four canonical gospels were originally written in Greek, the lingua franca of the Roman Orient.

Estimates for the dates when the canonical gospel accounts were written vary significantly; and the evidence for any of the dates is scanty. Because the earliest surviving complete copies of the gospels date to the 4th century and because only fragments and quotations exist before that, scholars use higher criticism to propose likely ranges of dates for the original gospel autographs.

As a matter of fact, all Muslims from Prophet Muhammad’s lifetime up to the Day of Judgment have only one Qur’an. The Qur’an which used to be recited by the Companions of Prophet Muhammad is the same Qur’an we recite today. However, there are some reasons why some people may think that there are differences in the text of the Qur’an.

Therefore, when it comes to the Qur’an as a text, it must be taken into consideration that the Qur’an has several styles of recitation (Qira’at) which were all revealed to Prophet Muhammad. In this regard, Prophet Muhammad is reported to have said: “This Qur’an has been revealed in seven different styles, so recite it in the way that is easiest for you.” (Al-Bukhari) It is also reported that he said: “Gabriel taught me one style. So I kept reviewing it until he taught me more; and I kept asking him for more and he gave me more until finally there were seven styles.” (Al-Bukhari)

The Qur’anic text is not an ordinary one but such a holy, miraculous, meaningful one. It was the last holy book to be revealed to humanity. The previous scriptures had certain validity. They would be confined to certain times, places and sometimes peoples. However, the Qur’an, as the last holy book, has much longer validity. It has to be consulted from Prophet Muhammad’s lifetime up to the Day of Judgment. It must include an answer to each question which may arise throughout this prolonged period of time.

Nevertheless, a holy book cannot contain much details; otherwise, it will be voluminous, bulky and, as a result, unreadable. Thus, it was necessary that the holy book to be sent should have been comprehensive but, at the same time, concise. That was the Qur’an. It is such a holy book which is concise in wording but rich in meaning. A generic verse of the Qur’an gives answers to several questions in multiple times and places. This per se is one of the miraculous aspects of the Qur’an.

One of the reasons for the differences in the text of the Qur’an is taking the various Arabic dialects into consideration. At the time of the revelation of the Qur’an, there were so many Arabic dialects for the then Arabs were Bedouin tribes which were scattered throughout the Arabian Peninsula. Each tribe had its own dialect and Arabic pronunciation. The various Arabian tribes had a lot of variants for the same words. They had no standard dialect given their nomadic lifestyle.

It is noteworthy that, upon the advent of Islam, Arabic itself had yet to assume a standard form. The usage of the Qur’an was the first usage to be adopted by all Arabs. The Arabic language from Prophet Muhammad’s time is based on the language of the Qur’an.

Being itself a great literary miracle, the Qur’an managed to unify all Arabs though they, at the time, were pioneers in rhetoric. The Qur’an defeated all previous literary masterpieces and set a new linguistic standard which Arabs could not challenge. So, they had to adopt such standard which took into account all of their dialects and allowed them to recite it each according to one’s own accent as a way for the facilitation of the recitation and a means of propagation and circulation.

Thus, we can conclude that there is only one Qur’an which Allah meant to bear as much meanings as possible and to be recited by as many people as possible. Such considerations of meaningfulness and facilitation of recitation entailed a particular form of the Qur’an which is so resilient that it, linguistically speaking, could unify Arabs by taking in all of their local dialects, and, semantically speaking, can serve as a guide every time and everywhere.

There is only one Qur’an. The earliest copies of the Qur’an were free from vowels, dots and punctuation in general for the reasons given above. If there is another Qur’an which materially different from the Qur’an all Muslims have, let those who have it come up with it.