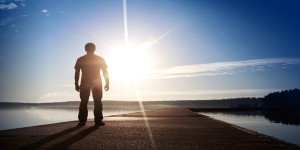 A Muslim is one who submits to the will of God.

My name is `Abdulhaqq (formerly known as D T F Wong). I am of Chinese origin and was born in Brunei Darussalam (which has a predominantly Muslim population). I am thirty six years old and male. I left Brunei Darussalam in 1977 to further my education in UK and am now settled in London UK. My education has mainly been at a missionary school (from kindergarten) related to the church and later for nearly two years at a Christian independent school in UK before entering College.

What I was before:

I was born into a Christian (protestant/Anglican) family who were (and still is) actively involved in the Church. In a secular society, one could add that I had also accepted and followed secular laws and customs. I remained a Christian till I was twenty seven.

What I am now

I am now a Muslim – have been for nearly nine years since I left Christianity.

Why I choose Islam

According to Islam, guidance is of two kinds: First, guidance of Tawfiq from Allah, i.e. Allah opens one’s heart to receive the truth. Second, guidance of Irshad i.e. through preaching by Allah’s Messengers and pious preachers who preach the truth.

In my case, the guidance came from God, I mean it was guidance of Tawfiq. I say this because I was actively seeking the truth and was hardly preached by Muslims.

When I was twenty-three (and in my last year in college), I became god-conscious in a way I was never really taught in Christianity. I looked out of my window and observed the signs of creation (e.g. sky, trees, people, etc.) and developed a strong belief in the existence of God. I was studying architecture (in College) and for me – when I look at buildings I know that someone designed and built it. Same with the creation – the alternation of night and day, the bodily functions, etc. led me to believe strongly that there was a Creator.

Christianity tends to push forward the concept Trinity which many can’t explain and many accept to satisfy their spiritual instinct. I had no problems with Christianity at this point. However, this new god-consciousness stayed with me. The way the Trinity was being ‘pushed to the masses’ by the Church as well as Christians left this new god-consciousness a personal experience for me.

I had never studied Islam even though I grew up in a predominantly Muslim country. At that time in Brunei Darussalam, non-Muslims were exempt from Islamic Education. One day I was passing by a Muslim bookshop and decided to enter (without any idea what I was looking for). I came across the Qur’an and decided to buy it. As any Muslim will tell you, the Qur’an instructs (time and time again) all mankind to observe the signs of creation around and affirm their belief in the Creator. This matched with the way that I had developed my new god-consciousness and I decided that there was truth in the Qur’an and Islam. The Qur’an also led me to question the authenticity of the Bible and the Trinity for the first time. I began searching and reading books questioning the authenticity of the Bible and the Trinity. Many Christians answer difficult questions on issues like the trinity with ‘God can do anything’.

I couldn’t fault Islam and the knowledge I was gaining had a profound impact on me more so than Christianity. I was slowly deciding to switch to Islam. Islam had a simple purity that anyone would appreciate – i.e. without the complexity of issues such as the Trinity. Islam allowed mankind to have an intellectual conviction on fundamental matters of belief. It did not leave the spiritual instinct in man to be satisfied by an emotional conviction such as one would say of idol-worshipping.

The decision to become Muslim was personal. When I told my parents that I had done so, my mother asked two of my uncles (who were in priesthood) to communicate with me – trying to convince me that Christianity was right. They failed and decided that I was not dragged into a cult and that I had made an informed decision. So, they left me to continue as a Muslim.

As I continue learning and increasing my knowledge of the religion of Islam, my faith in God increased. I became more aware of Christianity’s lack of guidance for mankind. Church services was man-made, Christian festivals/celebrations was man-made, arguments as to whether to accept homosexuality in Christianity or Christians at war, etc. Islam had guidance for relationships between man/woman and God, between man/woman and himself/herself, and man/woman with other men/women. Islam had guidance on issues relating to economics, politics, education, social, legal/penal system, etc. In Islam there is guidance on how God wants us to pray, how to conduct Friday prayers, what and how to celebrate, what is right and wrong, what the penalties for crimes are, how to set up the state, what the state should implement, how the ruler should rule, etc. Islam offered guidance on establishing a society based on divine guidance.

Christianity placed heavy emphasis on faith/beliefs and seemed happy to co-exist in a secular world. Islam had laws and guidance for individuals and society. I believed this to be right – that the Creator would not leave the Created to argue and make laws of their own. The Creator knows best for the Creation. Anyone would follow instructions from the manufacturer to make best use of the manufactured item. Islam is submission to the will of God, our Creator. Muslim is one who submits to the will of God, our Creator. Society will only function well and in peace when we all submit to the will of the Creator.

I could not be a Jew. Jews are a chosen people (descendants of Judah of the tribe of Israel). Christianity I now see as a deviation from the real teachings of Jesus, leading mankind from guidance from God to guidance of man/woman. With a world dominated by man-made laws and the evident injustices in society, the time is ripe a return to laws from the Creator, as Islam offers. I am convinced I made the right choice in becoming Muslim.