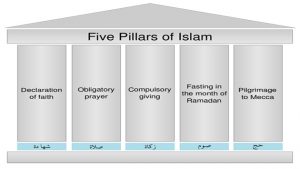 The five pillars of Islam are found in the Bible

Islam has five pillars as follows: 1- Testimony of faith (to testify that there is no god but God and Muhammad is the Messenger of God), 2- Prayer, 3- Almsgiving, 4- Fasting, 5- Pilgrimage.

Those pillars are separately found in the Qur’an but provided altogether in the well-known Gabriel hadith.

As for the testimony of faith, we find it out in the Bible, including the Old Testament and the New Testament.

As far as the first part (there is no god but God) is concerned, we read about it in the Old Testament: “Listen, Israel! The Lord our God is the only true God!” (Deuteronomy 6:4)

We also read: Now behold, one came and said to Him, “Good Teacher, what good thing shall I do that I may have eternal life?” So He said to him, “Why do you call Me good? No one is good but One, that is, God. But if you want to enter into life, keep the commandments.” (Matthew 19:16-17)

As far as the second part (Muhammad is the Messenger of God) is concerned, the Bible, including the Old Testament and the New Testament, testified for Muhammad as a prophet and messenger of God.

The Old Testament testified that the Children of Israel would continue to have the scepter until a person came, whom peoples would obey. About that we read: “The scepter will not depart from Judah, nor the lawgiver from between his feet, Until Shiloh come, And to him will be the obedience of peoples.” (Genesis 49:10)

Shiloh is a Hebrew word “שִׁילֹה” which has several meanings, including “tranquil” and “that is to be sent”.

The above meaning understood from the above verse is corroborated by the following statement of Jesus as quoted by the New Testament: “Therefore I say to you, that the kingdom of God shall be taken from you and shall be given to a nation producing the fruits of it.” (Matthew 21:43)

This verse clearly signifies that the scepter and kingdom would be taken away from the Children of Israel and go to another nation.

Besides, the New Testament quotes Jesus as confirming that there would be a comforter other than him. We read: “If ye love me, keep my commandments. And I will beg the Father, and he will give you another Comforter, that he may be with you forever, the Spirit of truth, whom the world cannot receive, because it does not see him nor know him; but ye know him, for he abides with you, and shall be in you.” (John 14:15-17)

The New Testament quotes Jesus as saying that any such comforter would remind people of what he said. We read: “But the Comforter, the Holy Spirit, whom the Father will send in my name, he shall teach you all things, and will bring to your remembrance all the things which I have said to you.” (John 14:26)

The New Testament also states that the comforter would testify for Jesus. We read: “But when the Comforter comes, whom I will send to you from the Father, the Spirit of truth who goes forth from with the Father, he shall bear witness concerning me.” (John 15:26)

The New Testament also quotes Jesus as affirming that the other comforter would not come until Jesus went way. We read: “But I say the truth to you, it is profitable for you that I go away; for if I do not go away, the Comforter will not come to you; but if I go I will send him to you.” (John 16:7)

While Christians claim that the above verses refer to the Holy Spirit to the extent that had to interpolate “the Holy Spirit” (John 14:26) above, the above verses indicate that the forthcoming comforter would be a human being like Jesus, rather than a non-human being given the facts that he would teach and remind people of what Jesus said and testify for Jesus and would not come until Jesus went away.

Those descriptions can apply only to Prophet Muhammad as we do not see the Holy Spirit teaching or reminding anybody of what Jesus said or testifying for Jesus, not to mention the fact that the Holy Spirit had been there before Jesus went away.

Moreover, the Bible clearly testifies for the prophethood of Prophet Muhammad in the Old Testament and the New Testament. In the Old Testament, we read: “The Lord your God will raise up for you a Prophet like me from your midst, from your brethren. Him you shall hear.” (Deuteronomy 18:15)

Almost the same testimony is repeated in the New Testament. We read: Moses said, “For Moses truly said to the fathers, ‘The Lord your God will raise up for you a Prophet like me from your brethren. Him you shall hear in all things, whatever He says to you. And it shall be that every soul who will not hear that Prophet shall be utterly destroyed from among the people.’” (Acts 3:22-23)

In the last of the verses of the Old Testament, the Bible confirms that a prophet referred to as “Elijah” would be sent prior to the Judgment Day. We read: “Look, I am sending Elijah the prophet to you, before the great and terrifying day of the Lord arrives. Turn the hearts of the parents to the children and the hearts of the children to their parents. Otherwise, I will come and strike the land with a curse.” (Malachi 4:5-6)

While Christians believe that Elijah the Tishbite will come back before the second coming of Jesus, the New Testament quotes Jesus as saying that Elijah actually came back, assuming the shape of John the Baptist.

We read: Now as they came down from the mountain, Jesus commanded them, saying, “Tell the vision to no one until the Son of Man is risen from the dead.” And His disciples asked Him, saying, “Why then do the scribes say that Elijah must come first?” Jesus answered and said to them, “Indeed, Elijah is coming first and will restore all things. But I say to you that Elijah has come already, and they did not know him but did to him whatever they wished. Likewise the Son of Man is also about to suffer at their hands.” Then the disciples understood that He spoke to them of John the Baptist.

However, according to the New Testament, John the Baptist himself confirmed that he was neither Elijah nor the expected prophet. We read: They asked him, “Then who are you? Are you Elijah?” He answered, “No, I am not Elijah.” They asked, “Are you the Prophet?” He answered, “No, I am not the Prophet.” (John 1:21) Jesus also confirmed that he was not Elijah (Matthew 13:16-17)

Therefore, Muslims believe that “Elijah”, the prophet to come before the Judgment Day, is Prophet Muhammad.

In the New Testament, we read: Then Jesus went on a little farther away from them. He fell to the ground and prayed, “My Father, if it is possible, don’t make me drink from this cup. But do what you want, not what I want.” (Matthew 26:39)

As for alms-giving, we find it out in the Bible, including the Old Testament and the New Testament. In the Old Testament, we read: “Don’t pick all the grapes in your vineyards or pick up the grapes that fall to the ground. You must leave those things for your poor people and for people traveling through your country. I am the Lord your God.” (Leviticus 19:10)

We also read: “When you are living in the land the Lord your God is giving you, there might be some poor people living among you. You must not be selfish. You must not refuse to give help to them. You must be willing to share with them. You must lend them whatever they need. “Don’t ever refuse to help someone simply because the seventh year, the year for canceling debts, is near. Don’t let an evil thought like that enter your mind. You must never have bad thoughts about someone who needs help. You must not refuse to help them. If you don’t help the poor, they might complain to the Lord, and he will judge you guilty of sin. “So be sure to give to the poor. Don’t hesitate to give to them, because the Lord your God will bless you for doing this good thing. He will bless you in all your work and in everything you do. There will always be poor people in the land. That is why I command you to be ready to help your brother or sister. Give to the poor in your land who need help.” (Deuteronomy 15:7-11)

In the New Testament, we read: Jesus answered, “If you want to be perfect, then go and sell all that you own. Give the money to the poor, and you will have riches in heaven. Then come and follow me!” (Matthew 19:21)

The New Testament tells us that Jesus observed fasting. We read: “Then was Jesus led up by the Spirit into the wilderness to be tempted by the devil. And when He had fasted forty days and forty nights, He afterward hungered.” (Matthew 4:1-2)

The New Testament also tells us that Jesus recommended fasting. We read: And Jesus rebuked the demon, and it came out of him; and the child was cured from that very hour. Then the disciples came to Jesus privately and said, “Why could we not cast it out?” So Jesus said to them, “Because of your unbelief; for assuredly, I say to you, if you have faith as a mustard seed, you will say to this mountain, ‘Move from here to there,’ and it will move; and nothing will be impossible for you. However, this kind does not go out except by prayer and fasting.” (Matthew 17:18-21)

Jesus even stressed the necessity of sincerity in fasting. We read: “And whenever you are fasting, do not look gloomy and sour and dreary like the hypocrites, for they put on a dismal countenance, that their fasting may be apparent to and seen by men. Truly I say to you, they have their reward in full already. But when you fast, perfume your head and wash your face, So that your fasting may not be noticed by men but by your Father, Who sees in secret; and your Father, Who sees in secret, will reward you in the open.” (Matthew 6:16-18)

As for pilgrimage, about it we read in the Bible: “Those who put their strength in you are truly happy; pilgrimage is in their hearts. As they pass through the Baca Valley, they make it a spring of water. Yes, the early rain covers it with blessings. They go from strength to strength, until they see the supreme God in Zion.” (Psalm 84:5-7)