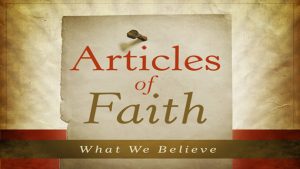 It goes without saying that Islam is not a new religion in terms of fundamental beliefs and pillars and most legislations. It is rather a heavenly message revealed to Prophet Muhammad as a supplement and complement to the previous divine messages, mainly the so-called “Judaism” and “Christianity”.

According to the Muslim faith, Islam is the religion of all prophets, and even, maybe, the name of the true religion of God every time and everywhere. There are numerous pieces of evidence for those facts, not to mention the substantiation of its articles of faith and pillars by the Biblical scriptures including the Old Testament and the New Testament despite the systematic distortion and corruption they experienced.

Those articles of faith are separately found in the Qur’an but provided altogether in the well-known Gabriel hadith.

`Umar ibn Al-Khattab reported: “One day when we were with the Messenger of Allah (May peace be upon him) a man with very white clothing and very black hair came up to us. No mark of travel was visible on him, and we did not recognize him. Sitting down beside the Messenger of Allah (May peace be upon him), leaning his knees against his and placing his hands on his thighs, he said: … ‘Now tell me about faith.’ He replied: ‘It means that you should believe in Allah, His Angels, His Scriptures, His Messengers and the Last Day, and Predestination.’ He said: ‘You have spoken the truth…” (Muslim)

As for belief in God, we find it in the Bible, including the Old Testament and the New Testament. For example, in the first of the verses of the Bible, we find a confession that God is the Creator Who created heavens and Earth. In the Old Testament, we read: “In the beginning God created the heaven and the earth.” (Genesis 1:1)

In the Old Testament, we also find an admission that it is God Who created man. We read: “So God created man in His own image, in the image of God created He him; male and female created He them.” (Genesis 1:27)

We also come across an acknowledgement that God is the Lord. We read: “These are the generations of the heavens and of the earth when they were created, in the day that the Lord God made the earth and the heavens.” (Genesis 2:4)

Similarly, in the New Testament, we find a statement quoted from Jesus himself confirming that worship and prostration should be intended solely for God alone. We read: Jesus responded, “Go away, Satan, because it’s written, You will worship the Lord your God and serve only him.” (Matthew 4:10)

As for belief in angels, we find it in the Bible, including the Old Testament and the New Testament. The Bible tells us that God actually has angels. About Hagar’s story in the Old Testament, we read: “But the Angel of the Lord found her by a spring of water in the wilderness on the road to Shur. And He said, Hagar, Sarai’s maid, where did you come from, and where are you intending to go? And she said, I am running away from my mistress Sarai. The Angel of the Lord said to her, Go back to your mistress and [humbly] submit to her control. Also the Angel of the Lord said to her, I will multiply your descendants exceedingly, so that they shall not be numbered for multitude. And the Angel of the Lord continued, See now, you are with child and shall bear a son, and shall call his name Ishmael [God hears], because the Lord has heard and paid attention to your affliction.” (Genesis 16:7-11)

About the birth of Jesus in the New Testament, we read: “But as he was thinking this over, behold, an angel of the Lord appeared to him in a dream, saying, Joseph, descendant of David, do not be afraid to take Mary [as] your wife, for that which is conceived in her is of (from, out of) the Holy Spirit.” (Matthew 1:20)

As for belief in the Holy Scriptures, in the Old Testament, the Bible, for example, tells us that God had sent down sacred tablets to Prophet Moses. We read: The LORD said to Moses, “Come up to me on the mountain and wait there. I’ll give you the stone tablets with the instructions and the commandments that I’ve written in order to teach them.” (Exodus 24:12)

We notice that the New Testament is based on and refers to the previous Scriptures. About the birth of Jesus, we read: “When Herod the king heard this, he was disturbed and troubled, and the whole of Jerusalem with him. So he called together all the chief priests and learned men (scribes) of the people and anxiously asked them where the Christ was to be born. They replied to him, In Bethlehem of Judea, for so it is written by the prophet: And you Bethlehem, in the land of Judah, you are not in any way least or insignificant among the chief cities of Judah; for from you shall come a Ruler (Leader) Who will govern and shepherd My people Israel.” (Matthew 2:3-6)

We observe that Jesus often referred to the previous Scriptures. For example, about the story of the three temptations, we read: “And the tempter came and said to Him, If You are God’s Son, command these stones to be made [loaves of] bread. But He replied, It has been written, Man shall not live and be upheld and sustained by bread alone, but by every word that comes forth from the mouth of God. Then the devil took Him into the holy city and placed Him on a turret (pinnacle, gable) of the temple sanctuary. And he said to Him, If You are the Son of God, throw Yourself down; for it is written, He will give His angels charge over you, and they will bear you up on their hands, lest you strike your foot against a stone. Jesus said to him, On the other hand, it is written also, You shall not tempt, test thoroughly, or try exceedingly the Lord your God. Again, the devil took Him up on a very high mountain and showed Him all the kingdoms of the world and the glory (the splendor, magnificence, preeminence, and excellence) of them. And he said to Him, These things, all taken together, I will give You, if You will prostrate Yourself before me and do homage and worship me. Then Jesus said to him, Begone, Satan! For it has been written, You shall worship the Lord your God, and Him alone shall you serve.” (Matthew 4:3-10)

For example, the Old Testament tells us about Prophet Noah. We read: “Noah was a just and righteous man, blameless in his [evil] generation; Noah walked [in habitual fellowship] with God.” (Genesis 6:9)

As for belief in the Judgment Day, we find it in the Bible, including the Old Testament and the New Testament. In the Old Testament, we read: “Look, I am sending Elijah the prophet to you, before the great and terrifying day of the Lord arrives. Turn the hearts of the parents to the children and the hearts of the children to their parents. Otherwise, I will come and strike the land with a curse.” (Malachi 4:5-6)

In the New Testament, we read: “I tell you that people will have to answer on Judgment Day for every useless word they speak.” (Matthew 12:36)

We also read: “Heaven and earth will pass away, but my words will certainly not pass away. But nobody knows when that day or hour will come, not the angels in heaven and not the Son. Only the Father knows.” (Mark 13:31-32)

As for belief in predestination, we find it in the Bible, including the Old Testament and the New Testament. There is no better evidence in the Old Testament for belief in and content with predestination than the story of Prophet Job. We read: While this messenger was speaking, another arrived and said: “Your sons and your daughters were eating and drinking wine in their oldest brother’s house, when a strong wind came from the desert and struck the four corners of the house. It fell upon the young people, and they died. I alone escaped to tell you.” Job arose, tore his clothes, shaved his head, fell to the ground, and worshipped. He said: “Naked I came from my mother’s womb; naked I will return there. The Lord has given; the Lord has taken; bless the Lord’s name.” In all this, Job didn’t sin or blame God. (Job 1:18-22)

We also read: Satan left and caused painful sores to break out all over Job’s body—from head to toe. Then Job sat on the ash-heap to show his sorrow. And while he was scraping his sores with a broken piece of pottery, his wife asked, “Why do you still trust God? Why don’t you curse him and die?” Job replied, “Don’t talk like a fool! If we accept blessings from God, we must accept trouble as well.” In all that happened, Job never once said anything against God. (Job 2:7-10)

We notice that the New Testament quotes Jesus as urging the acceptance of and content with predestination to the farthest extent. About that, we read: You know that you have been taught, “An eye for an eye and a tooth for a tooth.” But I tell you not to try to get even with a person who has done something to you. When someone slaps your right cheek, turn and let that person slap your other cheek. If someone sues you for your shirt, give up your coat as well. If a soldier forces you to carry his pack one mile, carry it two miles. When people ask you for something, give it to them. When they want to borrow money, lend it to them.” (Matthew 5:38-42)

We also read: “That’s why a man leaves his father and mother and gets married. He becomes like one person with his wife. Then they are no longer two people, but one. And no one should separate a couple that God has joined together.” (Matthew 19:5-6)

The Five Pillars of Islam in the Bible