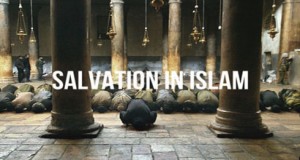 Islam teaches that everyone is born pure and it is us who corrupt ourselves. Islam gives a time to grow up and be able to use your rationality and reason in order to choose a religion. Salvation in Islam is not required because of the stain of the original sin. Salvation is required because humankind is imperfect and in need of Allah’s forgiveness and love. In order to understand the concept of salvation correctly, we must understand other topics embedded in salvation. First of all, let us take a look on the Story of Prophet Adam and Eve in the Qur’an (scripture of the Muslims). Adam and Eve made a mistake, they repented sincerely, and Allah in His infinite wisdom forgave them.

Story of Adam and Eve in the Qur’an

The Qur’an recounts details of the story of Prophet Adam and Eve in a number of chapters. It is similar in many ways to what is found in the surviving remnants of the previous scriptures except some basic principles. Allah told the angles that He was making a successive authority upon the earth. Allah (Glory be to Him) created Adam, fashioning him from clay. He breathed into from His Soul, taught him the names of all things, and created His wife Eve from the same soul. Allah allowed them to dwell in paradise with free will. Then, Allah ordered the angles to prostrate before Adam and they did so in a form of respect, not worship. Satan was among the angles, though he was not one of them. He was of the Jinn, a race of beings possessing free will that Allah created before Adam from a smokeless flame of fire. When Allah ordered the angles to prostrate before Adam, they all did so except Satan who refused out of arrogance, claiming to be better than Adam because he was created from fire, whereas Adam was created from clay. Based on this incident, Satan is considered the first racist.

After that, Satan fells from Allah’s grace as Allah condemned him for his disobedience, but Satan, the accursed, asked Allah to give him respite until the Day of Judgment, so he could make Adam and his offspring unworthy. Satan said, “Verily I will mislead them and surly I will arouse in them vain desires.”

Allah granted him what he wants (respite) as a trial for humanity. Allah knows what Satan knows not. It is important to note that no way Satan could ever “war” with Allah, because just like everything else, he is Allah’s creation. Satan exists only by Allah’s Will; he is completely under Allah’s Power. If Allah did not want Satan or his helpers to exist, they would not be able to remain in existence for even a moment.

Though arrogant, accursed, and deprived from Allah’s grace of Allah, Satan serves as a purpose. Allah wanted humans to have free choice between right and wrong. The human being is considered to be originally good by nature, born pure in the state of Islam (submission). Satan and his hosts order evil and oppose good, seeking to misguide humanity, his avowed enemy, into evil and idolatry, away from monotheism, righteousness, and the path of Allah. Allah, the All Wise, invites Muslims to enjoin good and forbid evil. Because we exercise free will, by resisting the temptation of Satan, humans can attain a great level of honor.

Returning to the story of Adam and Eve in paradise, they enjoyed perfect freedom and happiness in paradise. Allah told them to eat from the fruits of the Garden with pleasure and delight as they pleased. He forbade them to approach one tree, and warned them to do so. Satan came and deceived them, saying that Allah only forbade them to eat of the tree as it will make them immortal or like angles. They were thus deceived by Satan and ate of the tree. Adam and Eve felt shame. They turned to Allah in sincere repentance and Allah, the All-Forgiving, the Most Gracious and the Most Merciful, forgave them. Islam clearly rejects the concept of original sin, or the notion that all humans are born sinners because of the actions of Adam. No human shall ever bear the burden of another (for Allah is the Just). Every human being is responsible for his or her actions and is born as a Muslim, pure and free from sin. It is important to note that Islam does not place the blame on Eve. Both Adam and Eve had free will. Both of them ate of the tree. Their sin and disobedience were a joint venture. Islam rejects the idea that women are wicked temptresses or cursed with the burden of menstruation and pain of childbirth due to the sin of Eve.

Allah expelled Adam and Eve from Paradise and made them dwell on earth. Allah had earlier said to the angels that He would place a new being on earth. Earth is where Allah, from the time of creation, in His timeless knowledge, wanted us to be.

Therefore, the idea of Jesus dying on the cross is central to the Christian belief. It represents the conviction that Jesus died for the sins of humankind. In other words a person’s sins have been ‘paid’ for by Jesus, and one is free to do as he pleases, for in the end he will attain salvation by belief in Jesus. This is absolutely rejected in Islam.

There is no need for Allah or even a Prophet of Allah to sacrifice himself for humankind’s sins in order to buy forgiveness. Islam refuses this view entirely. The foundation of Islam rests on knowing with certainty that nothing should be worshipped but Allah alone. Forgiveness emanates from the One True God; so, when a person seeks forgiveness, he must turn to Allah submissively with true remorse and ask for forgiveness, promising not to repeat the sin. Then and only then will sins be forgiven by Allah, the Almighty.

Islam teaches that Jesus did not come to atone for the sins of humankind; rather, his purpose was to reaffirm the message of the Prophets (peace be upon them) before him.

None has the right to be worshipped but God, the One and the Only True Allah… (Aal `Imran 3:62)

The Islamic belief about Jesus’ crucifixion and death is clear. He did not die to atone for humankind’s sins. There was a plot to crucify Jesus but it did not succeed; he did not die but rather ascended into heaven. In the last days leading up to the Day of Judgment, Jesus will return to this world and continue to spread the belief in the Oneness of Allah. The Qur’an tells us that on the Day of Judgment Jesus will deny ever asking the people to worship him instead of, or along with Allah

Islam conducts that a human being could attain salvation through the worship of Allah alone. A person must believe in the Oneness of Allah and not associating any partner with him, which is known in Islam as Tawhid (faith). Worship Allah and follow his commandments is the same message delivered by all the Prophets since Adam, the father of mankind, until Muhammad, last Prophet to humanity; one God, without partners, sons, or daughters. In this way, salvation can be achieved through sincere worship.

As mentioned earlier, Islam rejects the idea that a human being is born sinner due to the original sin of Adam. On the contrary, Islam teaches us that a human being is born sinless and inclined to worship Allah. This fact is proven true by a study conducted by Oxford University over three years. To keep the state of sinlessness, a human being must only follow the commandments of Allah and strive to live a righteous life. In case a person indulges into sins, he/she distant themselves from the mercy of Allah, however, sincere repentance brings a person back to Allah.

And no bearer of burdens will bear the burden of another… (Fatir 35:18)

This leads us to the fundamental question, what is the mechanism of being sinless in Islam? What could a human being do in case of committing a sin?

It is a part of the human nature that a human being is prone to error and mistake whether deliberately or just a bad intention. Islam teaches us that Allah is the Most forgiving, Most Gracious, and the Most Merciful. Therefore, as human beings, we are constantly in need of forgiveness. Throughout the Qur’an Allah continually asks us to turn to Him in repentance and ask for His forgiveness. This is the road to salvation. This is our rescue from destruction. Muslims believe that this concept of repentance is shared by all the Prophets including Moses and Jesus not something newly brought by Prophet Muhammad (peace be upon him). It is narrated that the Prophet Muhammad said: “The one who repents from sin is like one who did not sin.” (Ibn Majah)