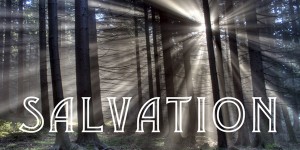 Salvation is a powerful word that the dictionary defines as the act of preservation or deliverance from destruction, difficulty, or evil.

Humanity looks for salvation in this world in order to be saved in the Hereafter and gain the pleasure of God and His eternal Heaven, but saved from what? What is the purpose of salvation? In the Following, we tackle that concept of salvation from the Christian perspective.

Salvation is a powerful word that the dictionary defines as the act of preservation or deliverance from destruction, difficulty, or evil. Theologically, it is a spiritual rescue from sin and its consequences. More specifically, in Christianity it is associated with redemption and the atonement of Jesus. Christians believe that humankind is considered wayward and sinful due to the original sin that states that humankind is born already affected by the sin of Adam and therefore separated from God, and in need for redemption. To understand the concept of original sin, we have to look at the story of the first human beings in Paradise.

The story of Adam and Eve in the Eden in Genesis

God created man on the sixth day out of the dust of the ground and breathed into his nostrils the breath of life; and man became a living soul.

Now, God planted a garden in Eden and He put the man called Adam there. And it was beautiful.

Of every tree of the garden you may freely eat: But of the tree of the knowledge of good and evil, you should not eat from it: for on the day that you eat thereof you surely die.

Then, God thought it wasn’t good for man to be alone, so He made a help mate for him. God caused a deep sleep to fall upon Adam and He took one of his ribs and then closed Adam’s flesh. And from that rib, God made a woman called Eve and brought her to the man. So, a man shall leave his father and his mother and shall cling to his wife and they shall be one flesh.

The devil, also known as Satan, was an angel of God. He was one of the most beautiful angels in heaven. He became jealous of God and wants to be God, but he knows that he cannot be all good, so instead, he is all bad. He competes with God to win people’s souls by trying to get them to do bad things and join him. He will try anything to get you to do what he wants. He has many faces and many names. In the story of Adam and Eve, Satan goes inside the serpent and talks to Eve.

Now, the serpent (Satan in disguise) was trickier than any other beast in the garden and he asked Eve if God truly said not to eat from any tree of the garden. Eve told the serpent that they could eat of any tree except the tree in the middle of the garden, and not to even touch it or else they would die. To this, the serpent replies, you will not die! God knows that the day you eat from that tree your eyes will be opened, and you’ll be like gods, knowing good and evil and will live forever.

When Eve heard this, she took the fruit from the tree and ate it and then gave some to Adam. Note that it does not indicate what type of fruit just that it was from the Tree of Knowledge of Good and evil. Then, the eyes of both were opened and they realized that they were naked, so they sewed fig leaves together and made coverings for themselves. Then, the man and his wife heard the sound of the God as He was walking in the garden in the cool of the day, so they hid themselves in the trees. But the Lord God called to the man, “Where are you?” He answered, “I heard you in the garden, and I was afraid because I was naked; so I hid.”

Then, God asked, “Who told you that you were naked? Have you eaten from the tree that I commanded you not to eat from?” And Adam said, “The woman you put here with me, she gave me some fruit from the tree, and I ate it.”

And God said to Eve, “What is this you have done?” And the woman said, “The serpent deceived me and I ate.”

And the Lord said to the serpent, “Cursed are you above all livestock and all wild animals! You will crawl on your bell and you will eat dust all the days of your life. And I will put enmity between you and the woman, and between your offspring [a] and hers; he will crush [b] your head and you will strike his heel.”

And the Lord said to the woman, “I will make your pains in childbearing very severe; with painful labor you will give birth to children. Your desire will be for your husband, and he will rule over you.”

And the Lord said to Adam, “Because you listened to your wife and ate fruit from the tree about which I commanded you, you must not eat from it, cursed is the ground because of you through painful toil you will eat food from it all the days of your life. It will produce thorns and thistles for you and you will eat the plants of the field. By the sweat of your brow you will eat your food until you return to the ground, since from it you were taken; for dust you are and to dust you will return.” (Genesis 1, 2 and 3)

They were driven by God out of the Garden of Eden; away essentially form God’s presence. They had to leave the special relationship that they had with God. In essence, it was not just that Adam and Eve were chased out of the Garden by God, but the entire created order had fallen to a state of separation from God. To sum it all up, this is what is known as the “original sin.” Mankind, all being descendants of Adam and Eve, has inherited it.

For Christians, salvation is the restoration of the original created order coming back to a relationship of love and trust between God and creation. So, this answers the question, what Christians are saved from? They are saved from a state of estrangement from God and saved for a life of abundance in relationship with God.