Between the Responsibility for the Word and the Press Freedom 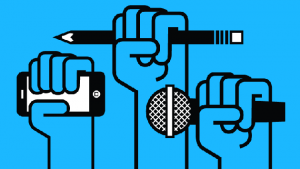 On the occasion of the celebration of the World Press Freedom Day, considerable controversy arises over the press freedom, the responsibility for the word and whether there should be restrictions on speech.

As a matter of fact, the responsibility for the word under Islam is much heavier than under any other religious, social or political system. Before coming out with any word, a Muslim should make sure that it is more likely to be good and conduce to good.

The Messenger of Allah (peace be upon him) said: “Whosoever believes in Allah and the Last Day, then let him speak good (khair) or remain silent.”[i]

Khair in this hadith means Islam or what Islam approves of. Every word a human being speaks is recorded by the two angels Kiraman Katibeen (honorable scribes “type of angels”). Even the speaking of one ‘bad’ word may lead someone to the Hell-fire.

The Messenger of Allah (peace be upon him) said: “The person who utters a word which meets with Allah’s favor may think it has not been heard, yet for this Allah will raise him to a higher level of Paradise. Conversely, the person who utters a word that stirs Allah to anger may give no thought to what he said, only to have Allah cast him in Hell for seventy years.”[ii]

This is why the Prophet (peace be upon him) emphasized the importance of controlling the tongue.

Mu’az ibn Jabal narrated: I was in company with the Prophet on a journey, and one day I was close to him while we were travelling. So I said: “O Messenger of Allah, tell me of an act which will take me into Paradise and will keep me away from Hell fire.”.…The Prophet suggested: “shall I not tell you of the foundation of all of that?” I said: “Yes, O Messenger of Allah,” and he took hold of his tongue and said: “Restrain this.” I said: “O Prophet of Allah, will what we say be held against us?” He said: “May your mother be bereaved of you, Mu’az! Is there anything that topples people on their faces – or he said – on their noses into Hell-fire, other than the jests of their tongues?”[iii]

However, the responsibility for the word should not hinder a Muslim from speaking up when necessary. There are some situations where Islam has obliged Muslims to speak out against oppression and evil (Munkar).

It is Allah (Exalted be He) who defined what is acceptable and unacceptable speech. Therefore if He (Exalted be He) obliges Muslims to speak out against Munkar and oppression, then no government in the Muslim world or the Western world can take away this right.

The Prophet (peace be upon him) said: “The master of martyrs is Hamza bin Abdul-Muttalib and a man who stood to an oppressive ruler where he ordered him and forbade him so he (the ruler) killed him.”[v]

Muslims account their governments and speak out against oppression as an obligation from Islam even if it leads to death.

Freedom of Speech during Caliphate

During the caliphate of the rightly guided caliphs, the Sahabah (Companions) exercised the right of speech.

For example, during the caliphate of Umar bin al-Khattab, some cloth from the spoils of war was distributed to the people, out of which each companion had one piece of clothing cut. One day `Umar got up to speak and said: “Hear and obey!” He was wearing two pieces of that cloth. Salman Al-Farisi said, “By Allah, we will not hear you, because you prefer yourself to your people.” “How is that?” Umar asked. He said: “You are wearing two pieces of cloth and everyone else is wearing only one.” Umar called out: “O Abdullah!” No one answered him. He said again, “O Abdullah ibn Umar!” Abdullah, his son, called out: “At your service!” Umar said, “I ask you by Allah: ‘Don’t you say that the second piece is yours?’” Abdullah said “Yes.” Salman said: “Now we shall hear you.”[vi]

Thousands of sincere Muslims are today following in the footsteps of the Sahabah and accounting their rulers. They are standing up to oppression and speaking out against the Munkar befalling this Ummah (Muslim community), fearing none but Allah (Exalted be He).

Allah, (Exalted be He) the Creator, and NOT human beings, decides the limits on speech. We will be accountable for every word spoken on the Day of Judgment. If Allah (Exalted be He) has ordered us to speak in certain circumstances such as accounting the rulers and speaking out against oppression, then no government in the world can take away that right, no matter how hard they try.

[i]Agreed upon. Narrated by Abu Hurayra

[iii]Reported by Ahmad and at-Tirmidhi and declared hasan by the latter. Also reported by an-Nasaa`i and Ibn Maajah