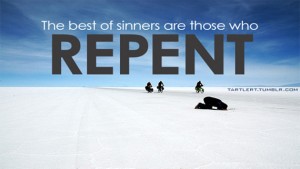 There is no need for God or even a Prophet of God to sacrifice himself for humankind’s sins in order to buy forgiveness.

Every human being can attain salvation by worshipping One God.  Staying connected to God and repenting from mistakes and sins is the road to salvation. We are all human and sometimes tend to lose the path for a while. It is truly encouraging to know that the door to repentance is always open, but what is more, Allah is actually happy when one of His slaves repents.

Who among us does not sin? And who among us does all that is required of him in the religion? It is an undeniable fact that we all have shortcomings; what distinguishes some of us from others, what raises some of us above others, is that the successful ones among us are those who repent their sins and ask Allah to forgive them.

Islam fully understands the temptations that come in the way of human beings, and that which some of us might go for. Only through repentance that one can wipe out those sins and past misdeeds and gradually get freed from the clutches of the ego. Therefore, we read in the Qur’an:

Now, let us know the mechanism of repentance in Islamic Legislation:

The word “tawbah” in Arabic literally means “to turn”. This word and its renditions have been used in many instances in the Qur’an, but its essence is the same: to turn towards God in humility after having disobeyed Him or transgressed His limits in order to return to the original state of being sinless. Repentance is a gift from God granted to those who are sincere in their worship as He has created mankind weak and are exposed to sins. The Qur’an says:

Anas (may Allah be pleased with him) narrated that Allah’s Messenger (peace be upon him) said: “All the sons of Adam are sinners, but the best of sinners are those who repent often.” (At-Tirmidhi and Ibn Majah)

Repentance is the most noble and beloved form of obedience in the eyes of the Almighty Allah. He loves those who repent. Repentance has a status that no other form of worship has. This is why Allah is extremely happy when a servant repents just as a traveller is happy when he finds his lost mount in the desert.

There is no need for God or even a Prophet of God to sacrifice himself for humankind’s sins in order to buy forgiveness. Islam refuses this view entirely. The foundation of Islam rests on knowing with certainty that nothing should be worshipped but God alone. Forgiveness emanates from the One True God; so, when a person seeks forgiveness, he must turn to God submissively with true remorse and ask for forgiveness, promising not to repeat the sin. Then and only then will sins be forgiven by God Almighty.

The Qur’an tells us that on the Day of Judgment Jesus will deny ever asking the people to worship him instead of, or along with God. Islam teaches that Jesus did not come to atone for the sins of humankind; rather, his purpose was to reaffirm the message of the Prophets before him.

None has the right to be worshipped but God, the One and the Only True God… (Aal `Imran 3:62)

The Islamic belief about Jesus’ crucifixion and death is clear. He did not die to atone for humankind’s sins. There was a plot to crucify Jesus but it did not succeed; he did not die but rather ascended into heaven. In the last days leading up to the Day of Judgment, Jesus will return to this world and continue to spread the belief in the Oneness of God. The Qur’an tells us that on the Day of Judgment Jesus will deny ever asking the people to worship him instead of, or along with God:

The trouble with human beings is that they can never, ever reach a state in which they will not commits sins even those with higher ranks of righteousness and piety. It is a fact that no believer can ever rest at peace about not committing a sin in the future. Repentance is the most noble and beloved form of obedience to God. He loves those who always repent as mention in the Qur’an, God says:

…Allah loves those who are constantly repentant… (Al-Baqarah 2:222)

Repentance is to repent from the heart, to train the heart into obedience and to make a firm resolution never to commit the sin again. For an accepted repentance, one should go through these steps:

How to repent to God after committing a sin?

One should go through the following steps to have his repentance accepted by God:

1- The penitent person should desist from the sinful act.

2- The person feels genuine and deep regret for having committing the sin.

3- Make a sincere and strong intention to never return to the sin again.

Part of this article is based on an article published on OnIslam.net.