The Qur’an and Imru’ Al-Qais 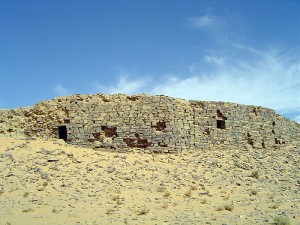 The Qur’an has been revealed to the Prophet among pure Arabs, who were the most advanced nation in the field of eloquence, and reached a high level of eloquent self-expression.

The Qu’ran is the last divine book revealed to the last Messenger, Muhammad (peace be upon him). It contains description of the concept of God, Messengers, Angels, Scriptures, the unseen and the Last Day and its events, like resurrection, reckoning, Paradise, Hellfire and eternal life. It talks in detail about the Islamic morals and ethics as well as the noble Islamic principles and values. The Qur’an confirms the divine Books which came before it, namely the Scriptures of Ibrahim, the Zabur of Dawud (David), the Torah of Moses and the Gospel of Jesus (peace be upon all Prophets and Messengers). The Qur’an included as well scientific facts and miracles about the creation of the universe, man and the living beings. It is a comprehensive book that touches on all walks of life and lays down the guidelines that regulate the people’s life and their relations with each other, the universe and God.

Almighty Allah revealed the Qur’an upon Prophet Muhammad (peace be upon him) and made him the last of Messengers. The message commissioned to all Prophets and Messengers was the worship of Allah Alone and ascribing no partners, equals or sons to Him. He is the Creator of everything and He has no son or father. Almighty Allah says,

‘The Qur’an has been revealed to the Prophet among pure Arabs, who were the most advanced nation in the field of eloquence, and reached a high level of eloquent self-expression. They would establish festivals of poetry and speech-giving, they hung their Mu`allaqat (millenary poems) on the Ka`bah as a sign of the high esteem for them. They competed in poetry and beautiful speech. Poetry flowed through their tongues and they recited poems on all occasions, for joy and sorrow, birth and death, happiness and misery, victory and defeat. This was something that was not known in any other nation. By His wisdom, Allah revealed the Qur’an in this language of which they were so proud.

However, the Qur’an dazzled these people with its beautiful words and meanings, its great purpose and structure. So, they submitted to it out of respect for its eloquence and dared not to speak any word of criticism against its wording, grammar or expression.

Allah challenged them in His Book to produce anything like the Qur’an, but they could not match it, let alone find fault with its grammar. Allah says:

Moreover, Allah challenged them to produce even a chapter like one of its chapters but they failed as well, He (Glory be to Him) said:

And if you are in doubt about what We have sent down upon Our Servant [Muhammad], then produce a surah the like thereof and call upon your witnesses other than Allah, if you should be truthful. (Al-Baqarah 2:23)”[1]

But the Hour is their appointment [for due punishment], and the Hour is more disastrous and more bitter.  (Al-Qamar 54:46)

They ascribed other verses to Imru’ Al-Qais and brought as evidence some quotes from unsubstantiated sayings from here and there. Anyway, by referring to the poems of Imru’ Al-Qais, which are widely known and have been translated several times into most of the world languages, nothing of this is mentioned in them. Again, nothing of this, even half of a verse, is found in Imru’ Al-Qais poetry. This is stated by all specialists in the Arabic literature. The divans of Imru’s Al-Qais are not something concealed but they are well known and memorized by many contemporary writers.

In addition, the quoted two verses talk about the coming of the Hereafter and the split of the moon. The question so is ‘from where did Imru’ Al-Qais know about the miracle of the split of the moon which happened at the time the Prophet Muhammad (peace be upon him) taking in consideration that Imru’ Al-Qais died long before the coming of Prophet Muhammad?’ Also, Imru’s Al-Qais rose up and died idolater, and he was never reported to worship Allah or believe in the hereafter; how come that he warned against the nearness of the coming of the Last Day in his poems?

Furthermore, the Arabs were well known for saying poetry, even impromptu, and no one of them is reported to say that the Qur’an was taken from the poetry of so and so. They were aware very well of their literature heritage and they memorized long poems because this was a source of excellence and proud among them.

The problem lies in that the enemies of Islam rely on groundless and inauthentic claims to sustain their suspicions and lies. We hope that they search for the truth and follow the religion that Allah willed for the whole humanity, the religion that ensures the success of this life and the hereafter. Almighty Allah says,