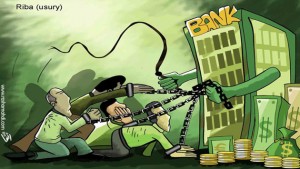 All divine religions prohibit usury, dispraise usurers and encourage helping people in need with nothing expected in return.

The Old Testament prohibits charging interest from poor brothers. We read the following verses: ““If you lend money to any of my people with you who is poor, you shall not be like a moneylender to him, and you shall not exact interest from him.” (Exodus 22:25)

In the New Testament, we read the following verse: “But love your enemies, and do good, and lend, expecting nothing in return, and your reward will be great, and you will be sons of the Most High, for he is kind to the ungrateful and the evil.” (Luke: 6:35)

The Qur’an elaborates on the prohibition of usury. It forbids interest and threatens usurers with severe torment in the Hellfire. Moreover, it likens usurers to those beaten by Satan into insanity.

It refutes the false claim of usurers that usury is as lawful as sale. It confirms that sale is lawful but usury is not.

It encourages charity and helping people in need, for the sake of God without expecting anything in return. It states that God destroys usury but augments charity.

It explicitly orders Muslims to give up usury. It warns that if usury is not given up, a war will be waged against them by God and His Messenger Muhammad.

It urges Muslims to invest their capitals without wronging one another. It recommends that if somebody experiences hardship, a creditor should wait until such a debtor has a time of ease. It is better for the creditor to give up his right as an act of charity.

Those who consume interest cannot stand [on the Day of Resurrection] except as one stands who is being beaten by Satan into insanity. That is because they say, “Trade is [just] like interest.” But Allah has permitted trade and has forbidden interest. So whoever has received an admonition from his Lord and desists may have what is past, and his affair rests with Allah . But whoever returns to [dealing in interest or usury] – those are the companions of the Fire; they will abide eternally therein.

Allah destroys interest and gives increase for charities. And Allah does not like every sinning disbeliever.

Indeed, those who believe and do righteous deeds and establish prayer and give zakah will have their reward with their Lord, and there will be no fear concerning them, nor will they grieve.

O you who have believed, fear Allah and give up what remains [due to you] of interest, if you should be believers.

And if you do not, then be informed of a war [against you] from Allah and His Messenger. But if you repent, you may have your principal – [thus] you do no wrong, nor are you wronged.

And if someone is in hardship, then [let there be] postponement until [a time of] ease. But if you give [from your right as] charity, then it is better for you, if you only knew. (Al-Baqarah 2: 275-280)

`Abdullah bin Mas`ud reported that the Messenger of Allah cursed the one who consumes usury, the one who pays it, those who witness it and the one who writes it down. (Ibn Majah)