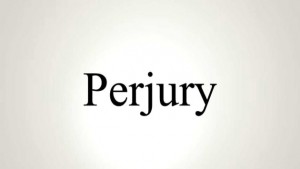 In fact, all divine religions prohibit perjury. We observe that the prohibition of perjury is one of the Ten Commandments in the Torah. In the Old Testament, we read: “You shall not give false testimony against your neighbor.” (Exodus 20:16)

The Qur’an orders Muslims to avoid perjury. In the Qur’an, we read the following verse:

…therefore avoid the uncleanness of the idols and avoid false words.(Al-Hajj 22:30)

According to the Qur’an, one of the qualities of the true servants of Allah is that they do not testify to falsehood. In the Qur’an, we read the following verses:

And the servants of the Most Merciful are those who walk upon the earth easily, and when the ignorant address them [harshly], they say [words of] peace…….and [they are] those who do not testify to falsehood, and when they pass near ill speech, they pass by with dignity. (Al-Furqan 25:63-72)

Prophet Muhammad also indicated that perjury renders fasting valueless. He once said: “Whoever does not abandon falsehood in word and action, then Allah has no need that he should leave his food and drink.” (Al-Bukhari)