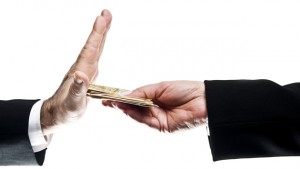 In the Bible, we read verses explicitly prohibiting bribe. For example, we read the following verse in the Bible: “And you shall take no bribe, for a bribe blinds the clear-sighted and subverts the cause of those who are in the right.” (Exodus 23:8)

We also notice that the Bible prohibits dishonest gain and praises those who refuse to take dishonest gain. We read the following verse in the Bible: “But select capable men from all the people—men who fear God, trustworthy men who hate dishonest gain—and appoint them as officials over thousands, hundreds, fifties and tens.” (Exodus 18:21)

The Qur’an dispraises those devouring Suht (dishonest gain). We read the following verse in the Qur’an:

[They are] avid listeners to falsehood, devourers of Suht (dishonest gain)… (Al-Ma’idah 5:42)

Prophet Muhammad used to forbid Suht. It is reported that he once said: “Each flesh nourished by Suht, hellfire will be worthier of it.” People asked: “What is Suht?” He replied: “Bribe in judgment.” (Al-Tabari)