God (Allah) is the Omnipotent 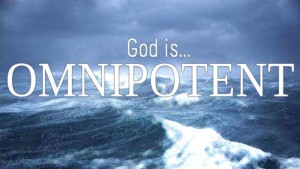 How can Jesus be God though he did not have an innate ability and derived his ability from the Father (God)?

One of the names and attributes of God is “the Omnipotent”. A god for this universe should be described as “competent” and “almighty”. An impotent, incompetent or incapable being cannot create or provide for this world.

The Omnipotent in Islam

There are many Qur’anic verses which confirm that God (“Allah” in Arabic) is “Competent” over all things. For example, in the Qur’an, we read:

And to Allah belongs the dominion of the heavens and the earth, and Allah is over all things Competent. (Aal `Imran 3:189)

In the Qur’an, God is also described as “Omnipotent”. We read:

And verily, warners came unto the people of Pharaoh. But, they belied all Our miracles. Therefore, We seized them with a Seizure of the All-Mighty, the Omnipotent. (Al-Qamar 54:41-42)

As to the Righteous they will be in the midst of Gardens and Rivers, in an Assembly of Truth in the Presence of a Sovereign Omnipotent. (Al-Qamar 54:54-55)

The Omnipotent in Christianity

In the New Testament, the Bible quotes Lady Mary, the Virgin, as describing God as “Mighty” for He did great things for her. He made her a mother for a fetus without a husband for her or a father for the fetus.

We read: And Mary said, “My soul magnifies the Lord, and my spirit rejoices in God my Savior, for he has looked on the humble estate of his servant. For behold, from now on all generations will call me blessed; for he who is mighty has done great things for me, and holy is his name. And his mercy is for those who fear him from generation to generation.” (Luke 1:46-50)

The Bible also quotes Jesus as describing God as “Able” to raise up human beings from stones. We read: “Bear fruit in keeping with repentance. And do not presume to say to yourselves, ‘We have Abraham as our father,’ for I tell you, God is able from these stones to raise up children for Abraham.” (Matthew 3:8-9)

While the Bible tells us that Jesus stated that God was able to raise up human beings from stones, it narrates that Jesus did not transform stones into bread when Satan asked him to do so to prove that he was really the son of God.

We read: Now when the tempter came to Him, he said, “If You are the Son of God, command that these stones become bread.” But He answered and said, “It is written, ‘Man shall not live by bread alone, but by every word that proceeds from the mouth of God.’” (Matthew 4:3-4)

There are many positions where Jesus affirmed that he was not omnipotent, that is to say he did not have an innate ability, nor could he do anything without empowerment by God. For example, in the New Testament, we read: Therefore Jesus answered and was saying to them, “Truly, truly, I say to you, the Son can do nothing of Himself, unless it is something He sees the Father doing; for whatever the Father does, these things the Son also does in like manner. (John 5:19)

We also read: “I can of myself do nothing: as I hear, I judge: and my judgment is righteous; because I seek not mine own will, but the will of him that sent me.” (John 5:30)

Indeed, we do not find the Bible describing Jesus as “mighty” without describing him as a “man” and a “prophet” in the same position. We read: “What things?” he asked. And he said to them, “What things?” And they said to him, “Concerning Jesus of Nazareth, a man who was a prophet mighty in deed and word before God and all the people. (Luke 24:19)

Since God was described as “Mighty” by Mary, the Virgin, even before the birth of Jesus, Jesus admitted that he did not have innate ability to do anything, we do not find Jesus described as “mighty” without having him described as a “man” and a “prophet”, how can Jesus be God? Can a being who is incompetent or derives his competence from another being be God?