God (Allah) is the Self-sufficient 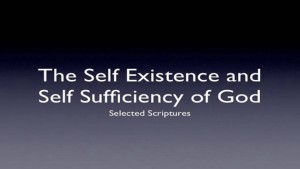 How can Jesus be God though he needed others for birth, satisfying hunger and thirst and saving from death?

It is He Who created, provide for, take care of, and look after all creatures. Everything cannot do without Him, while He can dispense with everything.

The Self-sufficient in Islam

In the Qur’an, God (called “Allah” in Arabic) is described as “Self-sufficient”. We read:

And your Lord is the Self-sufficient, the possessor of mercy. If He wills, he can do away with you and give succession after you to whomever He wills, just as He produced you from the descendants of another people. (Al-An`am 6:133)

God is also described as “the Enricher”, i.e. the One Who is Self-sufficient, and can dispense with people, and it is He Who can enrich or impoverish them. We read:

And your Lord is going to give you, and you will be satisfied. Did He not find you an orphan and give [you] refuge? And He found you lost and guided [you], And He found you poor and made [you] self-sufficient. (Ad-Duha 5-8)

God is also described as “the Everlasting Refuge”, i.e. the One in Whom people eternally take refuge. We read:

In the Prophetic tradition, Prophet Muhammad (peace be upon him) quoted God as describing Himself in a Qudsi (divine) hadith as “the Everlasting Refuge”.

The Self-sufficient in Christianity

As a matter of fact, belief in God’s self-sufficiency is such a belief which is totally absent from the Christian belief system. The Bible often tells us to which extent God is poor, helpless, needy, and deficient.

How can Jesus, taken as God along with God (called “the Father”) in Christianity, be Self-sufficient though he was born like any other human being?

In the New Testament, we read: “This is how the birth of Jesus Christ took place. When Mary his mother was engaged to Joseph, before they were married, she became pregnant by the Holy Spirit.” (Matthew 1:18)

If God was really born, this implies that he needed a father and a mother. Is it rational that God stands in need of others for birth? Are God’s parents equally gods or not?

Moreover, the Bible also informs us that Jesus experienced hunger and thirst like any other human being. About Jesus’ hunger, the New Testament says: “Then the Spirit led Jesus up into the wilderness so that the devil might tempt him. After Jesus had fasted for forty days and forty nights, he was starving.” (Matthew 4:1-2)

We also read: “In the morning, as he was returning to the city, he became hungry. And seeing a fig tree by the wayside, he went to it and found nothing on it but only leaves. And he said to it, ‘May no fruit ever come from you again!’ And the fig tree withered at once.” (Matthew 21:18-19)

About Jesus’ thirst, the New Testament says: “After this, knowing that everything was already completed, in order to fulfill the scripture, Jesus said, ‘I am thirsty.’” (John 19:28)

Besides, the Bible lets us know that Jesus was not self-reliant. He rather depended on others and prayed for help and assistance. We read: “When he sent them away, he went up onto a mountain by himself to pray. Evening came and he was alone.” (Matthew 14:23)

We also read: Then he went a short distance farther and fell on his face and prayed, “My Father, if it’s possible, take this cup of suffering away from me. However—not what I want but what you want.” (Matthew 26:39)

We may ask here: how can Jesus be God though he needed and depended on others for birth, satisfying hunger and thirst and saving from death?