Moderateness between Islam and Christianity 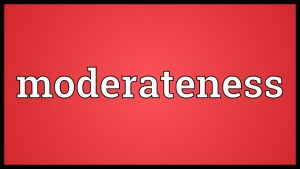 As a matter of fact, moderateness is one of the characteristics with which Islam is distinguished more than the other faiths. Therefore, God has set up the Muslim community as a witness over all other communities. God says:

And thus we have made you a just community that you will be witnesses over the people and the Messenger will be a witness over you. (Al-Baqarah 2:143)

The moderateness of Islam is reflected in its moderate teachings which are halfway between permissiveness and restrictiveness. In the Qur’an, God says:

And do not make your hand [as] chained to your neck or extend it completely and [thereby] become blamed and insolvent. (Al-Israa’ 17:29)

The moderateness of Islam is also represented by its moderate commands and prohibitions. A Muslim is not charged except with that within its capacity. God says:

God does not charge a soul except [with that within] its capacity (Al-Baqarah 2:286)

We do not charge any soul except [with that within] its capacity (Al-An`am 6:152)

No person is charged with more than his capacity (Al-Baqarah 2:233)

The Muslim’s condition – either richness or poorness – is always taken into consideration when it comes to financial liabilities. God says:

Let a man of wealth spend from his wealth, and he whose provision is restricted – let him spend from what God has given him. God does not charge a soul except [according to] what He has given it. God will bring about, after hardship, ease. (At-Talaq 65:7)

`Imran bin Husain (may God be pleased with him) reported: “I had piles, so I asked Prophet Muhammad (peace be upon him) about prayer. He said, ‘Pray while standing and if you can’t, pray while sitting and if you cannot do even that, then pray lying on your side.’” (Al-Bukhari)

Prophet Muhammad used to command bearable acts of worship and prohibit unbearable ones. `Aishah (may God be pleased with her) reported that the Prophet came in to her and there was a woman with her. He said: “Who is this?” She said: “So-and-so, and she does not sleep.” And she told him about how she prayed a great deal. He said: “Stop praising her. You should do what you can, for by God, God never gets tired (of giving reward) until you get tired. And the most beloved of religious actions to Him is that in which a person persists.” (An-Nasa’i)

Anas ibn Malik (may God be pleased with him) reported: “The Prophet saw an old man walking, supported by his two sons, and asked about him. The people informed him that he had vowed to go on foot (to the Ka`ba). He said, ‘God is not in need of this old man’s torturing himself,’ and ordered him to ride.” (Al-Bukhari and Muslim)

Anas bin Malik also reported that a group of three men came to the houses of the wives of the Prophet asking how the Prophet worshipped (God), and when they were informed about that, they considered their worship insufficient and said, “Where are we from the Prophet as his past and future sins have been forgiven.” Then one of them said, “I will offer prayer throughout night forever.” The other said, “I will fast throughout year and will not break my fast.” The third said, “I will keep away from women and will not marry forever.” The Messenger of God then came to them and said, “Are you the same people who said so-and-so? By God, I am more submissive to God and more afraid of Him than you; yet I fast and break my fast, I do sleep and I also marry women. So he who does not follow my tradition in religion is not from me (not one of my followers).” (Al-Bukhari & Muslim)

Prophet Muhammad used to prohibit extremism and fanaticism. `Aisha (may God be pleased with him) reported that Prophet Muhammad did something as it was allowed from the religious point of view but some people refrained from it. When the Prophet heard of that, he, after glorifying and praising God, said, “Why do some people refrain from doing something which I do? By God, I know God more than they do and I fear God more than they do.” (Al-Bukhari)

Prophet Muhammad prohibited religious extremism and indicated that it leads to the destruction of nations and communities. Ibn `Abbas (may God be pleased with him) reported: “On the morning of Al-Aqabah, while he was on his mount, the Messenger of God said to me: ‘Pick up (some pebbles) for me.’ So I picked up some pebbles for him that were the size of date stones or fingertips, and when I placed them in his hand, he said: ‘Like these (pebbles are picked up). And beware of going to extremes in religious matters, for those who came before you were destroyed because of going to extremes in religious matters.’” (Ahmad & Ibn Majah)

Ibn `Abbas reported that he heard `Umar (may God be pleased with him) saying on the pulpit: “I heard the Prophet saying, ‘Do not exaggerate in praising me as the Christians did the son of Mary, for I am only a Slave. So, call me the Slave of and Messenger of God.’” (Bukhari)

Islam recommends moderateness and reasonableness in both religious and mundane matters. It also praises those who are so characterized as true servants of God. In the Qur’an, God says:

The true servants of God are…And [they are] those who, when they spend, do so not excessively or sparingly but are ever, between that, [justly] moderate (Al-Furqan 25:63-67)

Abu Hurairah (May God be pleased with him) reported that the Prophet said, “The religion (of Islam) is easy, and whoever makes the religion a rigor, it will overpower him. So, follow a middle course (in worship); if you can’t do this, do something near to it and give glad tidings and seek help (of God) at morn and at dusk and some part of night”. (Al-Bukhari)

`Aishah (may God be pleased with her) reported: “Whenever the Messenger of God was given the choice of one of two matters, he would choose the easier of the two, as long as it was not sinful to do so, but if it was sinful to do so, he would not approach it. The Messenger of God never took revenge (over anybody) for his own sake but (he did) only when God’s sanctity is outraged, in which case he would take revenge for God’s Sake.” (Al-Bukhari and Muslim)

Abu Huraira (may God be pleased with him) reported that Prophet Muhammad said, “The deeds of anyone of you will not save you (from the (Hell) Fire).” They said, “Even you (will not be saved by your deeds), O Messenger of God?” He said, “No, even I (will not be saved) unless and until God bestows His Mercy on me. Therefore, do good deeds properly, sincerely and moderately, and worship God in the forenoon and in the afternoon and during a part of the night, and always adopt a middle, moderate, regular course whereby you will reach your target (Paradise).” (Al-Bukhari and Muslim)