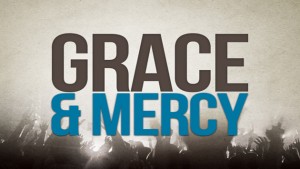 Islam is the religion of mercy and grace.

Islam is the religion of mercy. The most conclusive evidence for that is the derivation of two of God’s Most Beautiful Names from mercy. In Islam, God is Rahman and Rahim (“Entirely Merciful” and “Especially Merciful” in English) in reference to God’s infinite mercy towards His creatures.

[All] praise is [due] to Allah, Lord of the worlds – The Entirely Merciful, the Especially Merciful (Al-Fatihah 1:2-3)

God’s infinite mercy in Islam has no match in other religions. For example, we notice that, in the Bible, especially the Old Testament, when Adam disobeyed his Lord, God did not forgive him, rather He threatened him and cursed the earth because of him.

However, in Islam, we notice that Adam did not need to do anything after disobedience but to show sincere repentance. When he turned to God in sincere repentance, God accepted his repentance and showed infinite mercy to him. In the Qur’an, we read:

Then Adam received from his Lord [some] words, and He accepted his repentance. Indeed, it is He who is the Accepting of repentance, the Merciful. (Al-Baqarah 2:37)

Indeed, God’s mercy was quite far away from the previous communities. For example, the Children of Israel had sometimes to kill themselves so that they could qualify for God’s mercy. About that, God says:

And [recall] when Moses said to his people, “O my people, indeed you have wronged yourselves by your taking of the calf [for worship]. So repent to your Creator and kill yourselves. That is best for [all of] you in the sight of your Creator.” Then He accepted your repentance; indeed, He is the Accepting of repentance, the Merciful. (Al-Baqarah 2:54)

On the contrary, in Islam, God’s mercy is quite near to Muslims. If a Muslim disobeys his Lord and then invokes his lord in fear and aspiration, he will have the mercy and pleasure of God. In the Qur’an, we read:

And cause not corruption upon the earth after its reformation. And invoke Him in fear and aspiration. Indeed, the mercy of Allah is near to the doers of good. (Al-A`raf 7:56)

Prophet Muhammad (peace be upon him) said: “Allah has divided mercy into one hundred parts; and He retained with Him ninety-nine parts, and sent down to earth one part. Through this one part creatures deal with one another with compassion, so much so that an animal lifts its hoof over its young lest it should hurt it.” (Al-Bukhari)

Whenever a Muslim cannot do something commanded, God will show mercy to him and accept from him what he can afford. In the Qur’an, we read:

But whoever is forced [by necessity], neither desiring [it] nor transgressing [its limit], there is no sin upon him. Indeed, Allah is Forgiving and Merciful.(Al-Baqarah 2:173)

Prophet Muhammad himself was mercy from God to the believers. In the Qur’an, we read:

And among them are those who abuse the Prophet and say, “He is an ear.” Say, “[It is] an ear of goodness for you that believes in Allah and believes the believers and [is] a mercy to those who believe among you.” And those who abuse the Messenger of Allah – for them is a painful punishment. (At-Tawbah 9:61)

The Qur’an points out that Prophet Muhammad was very merciful and compassionate towards the believers. We read:

There has certainly come to you a Messenger from among yourselves. Grievous to him is what you suffer; [he is] concerned over you and to the believers is kind and merciful. (At-Tawbah 9:128)

Moreover, the Qur’an makes it clear that if Prophet Muhammad had been rude or harsh, people would have certainly turned away from him. So Prophet Muhammad was so lenient and clement towards people. He himself was commanded to forgive and pardon people and even seek God’s forgiveness for them. In the Qur’an, we read:

Actually, Muslims are commanded to follow in the footsteps of Prophet Muhammad. A Muslim must show mercy, leniency, pardon, and forgiveness and avoid rudeness, harshness and alienation.

Prophet Muhammad said: “Indeed, God shows mercy to the merciful out of His servants.” (Al-Bukhari)

Prophet Muhammad also said: “He who does not show mercy will not be shown mercy.” (Agreed-on hadith)

The Holy Scriptures which God sent down to His servants from Adam to Muhammad are mercy to them. About the Torah sent down to Moses, God says in the Qur’an:

Then We gave Moses the Scripture, making complete [Our favor] upon the one who did good and as a detailed explanation of all things and as guidance and mercy that perhaps in [the matter of] the meeting with their Lord they would believe. (Al-An`am 6:154)

And when the anger subsided in Moses, he took up the tablets; and in their inscription was guidance and mercy for those who are fearful of their Lord. (Al-A`raf 7:154)

The Qur’an itself is also mercy. About the Qur’an, God says:

And We had certainly brought them a Book which We detailed by knowledge – as guidance and mercy to a people who believe. (Al-A`raf 7:52)

About the Qur’an, God also says:

O mankind, there has to come to you instruction from your Lord and healing for what is in the breasts and guidance and mercy for the believers. Say, “In the bounty of Allah and in His mercy – in that let them rejoice; it is better than what they accumulate.” (Yunus 10:57-58)

2 thoughts on “Mercy in Judaism, Christianity and Islam”

And that is true. The Allah of the Quran is Most Merciful. But there is only one characteristic of Allah, which is not found in the Quran at all, and which is actually very important to all human beings, and that is “Unconditionally Loving!” There was a time in my life as a Muslim during which I needed so much assurance from Quran that Allah actually loved me unconditionally, and it just was not there. Allah of Quran only loves Muslims, and only Muslims, when they do as He says. In other words, the Allah or Quran loves anybody and is only merciful to anybody if he or she complies with certain requirements. You can check it for yourself: there is not a single Verse in Quran without a condition: “you either do this or that or Allah does not love you.” And it makes me so sad. That is why I returned to my Jesus, who loves me no matter who I am and what I do: and that is why I am motivated to offer my whole life to Him. Because He loved me even while I was a Muslim, as He loves all Muslims. And I love you.

Dear sir, do you not agree that love is tested in case of disloyalty, disobedience and ingratitude? Under Islam, in the Qur’an, when man represented by Adam showed disloyalty, disobedience and ingratitude to God, but then turned to Him in repentance, God, out of His infinite love for Adam, accepted his repentance and forgave him. On the contrary, the Bible in which you believe as the Words of God tells us about a resentful god who did not accept man’s repentance, but threatened and intimidated him and even cursed the earth because of him. Furthermore, such a vengeful god meted out an eternal punishment for Adam as well as his offspring who inherited his sin though it was committed before they came into being. According to the New Testament, only blood could serve as atonement for such a sin. An alleged son of god had to be killed and offered as a sacrifice in atonement for Adam’s sin. What a sanguinary god? How can such a god love people if He did not love His alleged son? Is it logical that a good, sinless, innocent son is sacrificed for the sake of sinful, evil people? Now who is more loving: God in Islam or God in Christianity?