Mary Between the Bible and the Qur’an 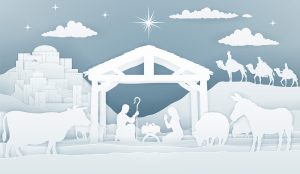 The Qur’an does not mention that Mary delivered a baby other than Jesus in her life.

The Bible does not give much importance to Mary in comparison to the Holy Qur’an which views Mary as a”Sign” from Allah: “

And We made the son of Mary and his mother a sign and sheltered them within a high ground having level [areas] and flowing water”. (23:50).

It, moreover, shows Allah’s favor to her and her son (Jesus) with blessings. There is a Surah (chapter) in the Qur’an which bears the name of Mary.

“So her Lord accepted her with good acceptance and caused her to grow in a good manner and put her in the care of Zechariah. Every time Zechariah entered upon her in the prayer chamber, he found with her provision. He said, “O Mary, from where is this [coming] to you?” She said, “It is from Allah. Indeed, Allah provides for whom He wills without account.” (3:37)

“And [mention] when the angels said, “O Mary, indeed Allah has chosen you and purified you and chosen you above the women of the worlds”. (3:42)

On the other hand, there is few mention of Mary in the Bible except in gospels and in one incident in the Acts of the Apostles (Acts, 1:14).

Mary is mostly mentioned in the gospels in the contexts of giving birth to Jesus :

A full account of the story is as follows:

“In the sixth month of Elizabeth’s pregnancy, God sent the angel Gabriel to Nazareth, a town in Galilee, to a virgin pledged in marriage to a man named Joseph, who was of the house of David. And the virgin’s name was Mary. The angel appeared to her and said, “Greetings, you who are highly favored! The Lord is with you.”… Mary was greatly troubled at his words and wondered what kind of greeting this might be. So the angel told her, “Do not be afraid, Mary, for you have found favor with God.… Behold, you will conceive and give birth to a son, and you are to give Him the name Jesus.… He will be great and will be called the Son of the Most High. The Lord God will give Him the throne of His father David,… and He will reign over the house of Jacob forever. His kingdom will never end!”… “How can this be,” Mary asked the angel, “since I am a virgin?”… Look, even Elizabeth your relative has conceived a son in her old age, and she who was called barren is in her sixth month.… For nothing will be impossible with God.”…(Luke, 1: 26-37).

The account of the incident is also mentioned in Matthew as follows:

“This is how the birth of Jesus the Messiah came about: His mother Mary was pledged to be married to Joseph, but before they came together, she was found to be pregnant through the Holy Spirit. Because Joseph her husband was faithful to the law, and yet did not want to expose her to public disgrace, he had in mind to divorce her quietly. But after he had considered this, an angel of the Lord appeared to him in a dream and said, “Joseph son of David, do not be afraid to take Mary home as your wife, because what is conceived in her is from the Holy Spirit. She will give birth to a son, and you are to give him the name Jesus, because he will save his people from their sins. All this took place to fulfill what the Lord had said through the prophet: “Look! The virgin will conceive a child! She will give birth to a son, and they will call him Immanuel, which means ‘God is with us.’” When Joseph woke up, he did what the angel of the Lord had commanded him and took Mary home as his wife. But he did not consummate their marriage until she gave birth to a son. And he gave him the name Jesus.” (Matthew, 1:25)

The bible mentions that Mary was engaged to Jesus Joseph the Carpenter. It, moreover, claims that Jesus was his son:

“Isn’t this the carpenter’s son? Isn’t his mother’s name Mary, and aren’t his brothers James, Joseph, Simon and Judas?” (Matthew, 13:55).

Such verses goes against facts and the miraculous nature of the virgin birth of Jesus and her chastity. The Qur’an, on the contrary, the Qur’an tells a virtuous biography of Mary and her righteous upbringing:

“But when she delivered her, she said,”My Lord, I have delivered a female.” And Allah was most knowing of what she delivered, “And the male is not like the female. And I have named her Mary, and I seek refuge for her in You and [for] her descendants from Satan, the expelled [from the mercy of Allah].” (3:36).

It does not refer that Mary was engaged or married to anyone. The miraculous birth is mentioned as follows in the Qur’an:

“[And mention] when the angels said, “O Mary, indeed Allah gives you good tidings of a word from Him, whose name will be the Messiah, Jesus, the son of Mary – distinguished in this world and the Hereafter and among those brought near [to Allah].” (3:45)

“And mention, [O Muhammad], in the Book [the story of] Mary, when she withdrew from her family to a place toward the east. And she took, in seclusion from them, a screen. Then We sent to her Our Angel, and he represented himself to her as a well-proportioned man. She said, “Indeed, I seek refuge in the Most Merciful from you, [so leave me], if you should be fearing of Allah.” He said, “I am only the messenger of your Lord to give you [news of] a pure boy.” She said, “How can I have a boy while no man has touched me and I have not been unchaste?” He said, “Thus [it will be]; your Lord says, ‘It is easy for Me, and We will make him a sign to the people and a mercy from Us. And it is a matter [already] decreed.’ “So she conceived him, and she withdrew with him to a remote place. And the pains of childbirth drove her to the trunk of a palm tree. She said, “Oh, I wish I had died before this and was in oblivion, forgotten.” But he called her from below her, “Do not grieve; your Lord has provided beneath you a stream. And shake toward you the trunk of the palm tree; it will drop upon you ripe, fresh dates”.(19:16-25)

The Qur’an condemns the Jews for their accusing of Mary of committing adultery:

“And [We cursed them] for their disbelief and their saying against Mary a great slander,”(4:156). The Messiah, Jesus, the son of Mary, was but a messenger of Allah and His word which He directed to Mary and a soul [created at a command] from Him. So believe in Allah and His messengers”. (4:171).

“And [the example of] Mary, the daughter of ‘Imran, who guarded her chastity, so We blew into [her garment] through Our angel, and she believed in the words of her Lord and His scriptures and was of the devoutly obedient”.(66:12)

The Bible, claims that Jesus was the Carpenter’s son son:

“Isn’t this the carpenter’s son? Isn’t his mother’s name Mary, and aren’t his brothers James, Joseph, Simon and Judas?” (Matthew, 13:55).

Refuting such contradiction, Christians badly construed the meanings of such text as follows to mean:

As to the texts which mention brothers to Jesus, they are as follows:

Explainers to these texts claimed that the word “Brothers” does not necessarily  mean brotherhood in lineage in Jewish culture and that the Aramaic and Hebrew languages support this. However, the text denotes otherwise in which the phrase “Isn’t this the carpenter’s son?” is intended to identify Jesus.