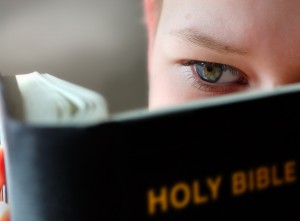 Only in Islam all the believers are equal, no priest, no sacrament; no Muslim high as a hill, or low like a valley.

3. “The Coming Wrath.” Have you ever met with a sensible, judicious, and convincing interpretation of this phrase in any of the commentaries numerous on the Gospels? What does John mean, or wish his audience to understand, by his expression: “Behold the axe is already set at the root of the tree”? Or his remark: “He holds the van in his hand to purge out his threshing-floor”? Or when he reduced the title “Children of Abraham” to nothing?

I will not detain you on the vagaries of the commentators, for they are reveries which neither John nor his hearers had ever dreamed of. Could John ever teach those haughty Pharisees, and those rationalistic Saduqees1 who denied the corporeal resurrection, that on the day of the last judgment Jesus of Nazareth would pour down upon them his wrath and burn them like the fruitless trees and like the chaff in the fire of hell? There is not a single word in all the literature of the Scriptures about the resurrection of bodies or about hell-fire. These Talmudistic writings are full of eschatological material very similar to those of the Zardushtees, but have no distinct origin in the canonical books.

The Prophet of repentance and of good tidings does not speak about the remote and indefinite wrath which certainly awaits the unbelievers and the impious, but of the near and proximate catastrophe of the Jewish nation. He threatened the wrath of Allah awaiting that people if they persisted in their sins and the rejection of his mission and that of his colleague, Jesus Christ. The coming calamity was the destruction of Jerusalem and the final dispersion of Israel which took place some thirty years afterwards during the lifetime of many among his hearers. Both he and Jesus announced the coming of the Great Apostle of Allah whom the Patriarch Jacob had announced under the title of Shiloha, and that at his advent all prophetic and royal privileges and authority would be taken away from the Jews; and, indeed, such was the case some six centuries later, when their last strongholds in the Hijaz were razed to the ground and their principalities destroyed by Muhammad. The increasingly dominating power of Rome in Syria and Palestine was threatening the quasiautonomy of the Jews, and the emigration current among the Jews had already begun. And it was on this account that the preacher inquires, “Who has informed you to flee from the coming wrath?”

They were warned and exhorted to bear good fruits and good harvest by repentance and belief in the true Messengers of God, especially in the Rasul Allah, who was the true and the last powerful Commander.

4. The Jews and the Christians have always charged Muhammad of having established the religion of Islam by force, coercion, and the sword. The Muslim modernists have always tried to refute this charge.But this does not mean to say that Muhammad never wielded the sword. He had to use it to preserve the name of God. Every patience has limits, every favor has an end. It is not that Allah’s patience or favor is finite; with Him all is settled, defined and fixed. The chance and the time graciously granted by Allah to the Jews, to the Arabs, and to the Gentiles lasted for more than four thousand years. It was only after the expiry of this period that Allah sends His beloved Muhammad with power and sword, with fire and spirit, to deal with the wicked unbelievers, with the ungrateful children of Abraham – both the Ishmaelites and the Israelites- and deal with the power of the Devil, once for all.

The whole of the Old Testament is a tale of theocracy and of idolatry. Now and then a little sparkle of Islam that is, the religion of Allah, glittered in Jerusalem and in Mecca; but it was always persecuted by the power of the Devil. The four diabolical Beasts had to come and trample under their feet the handful of believers in Allah.

Then,comes Muhammad to crush and kill the Venemous Serpent and to give him the opprobrious title of “Iblis”the “Bruised” Satan.Certainly, Muhammad was a fighting Prophet, but the object of that fighting was victory not vengeance, defeat of the enemy and not his extermination, and, in a word, to establish the religion of Islam as the Kingdom of God upon the earth. In fact, when the Crier in the desert shouted, aloud, “Prepare the way of the Lord, and make straight His paths,” he was alluding to the religion of the Lord in the form of a kingdom which was drawing nigh. Seven centuries before, the Prophet Isaiah had cried out and pronounced the same words (Isa. xl. 1-4); and a couple of centuries later Allah Himself paved the way for Cyrus by raising and filling up every valley, and by lowering every hill and mountain, in order to make the conquest easy and the march rapid.

History repeats itself, they say; the language and its meaning is the same in both cases, the former being a prototype of the latter. Allah had smoothed the path for Cyrus, subdued his enemies to the Persian conqueror because of His House in Jerusalem and His chosen people in the captivity. Now again He was repeating the same providence, but on a larger and wider scale. Before the preaching of Muhammad, idols and falsehood disappeared; before his sword empires tumbled down; and the children of the kingdom of Allah became equals and formed a “people of the Saints of the Most High.”

For it is only in Islam that all the believers are equal, no priest, no sacrament; no Muslim high as a hill, or low like a valley; and no caste or distinction of race and rank. All believers are one, except in virtue and piety, in which they can excel each other. It is only the religion of Islam that does not recognize any being,great and holy, as an absolute mediator between Allah and man.

1-   This Hebrew name is wrongly written “Saducees.” (the author).