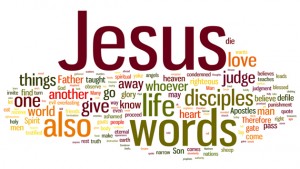 Jesus is not the Alpha and the Omega, the Beginning and the End, or the First and the Last

We also read: “I was in the Spirit on the Lord’s day, and heard behind me a great voice, as of a trumpet, Saying, I am Alpha and Omega, the First and the Last.” (Revelation 1:10-11)

We further read: “He said to me: “It is done. I am the Alpha and the Omega, the Beginning and the End. To the thirsty I will give water without cost from the spring of the water of life.” (Revelation 21:6)

In the New Testament, we also find the following verse: “I am the Alpha and the Omega, the Beginning and the End, the First and the Last.” (Revelation 22:13)

Let’s review each of the above descriptions and find out whether Jesus really came out with those descriptions.

As for “the Alpha and the Omega”, in fact, this is a description of God rather than Jesus. It seems that Christians are thrown into utter confusion. I do not know the secret behind such confusion despite the clearness of the context.

Though this description is given and frequently repeated in the Revelation, the Christians have misunderstood it as standing for Jesus though it is clearly standing for God. There is no clearer evidence than the context itself. Let’s place the relevant verses in their wider contexts and identify the one to whom they truly refer.

“I am the Alpha and the Omega, the Beginning and the End, saith the Lord, which is, and which was, and which is to come, the Almighty.” (Revelation 1:8)

“He who was seated on the throne said, ‘I am making everything new!’ Then he said, ‘Write this down, for these words are trustworthy and true.’ He said to me: ‘It is done. I am the Alpha and the Omega, the Beginning and the End. To the thirsty I will give water without cost from the spring of the water of life. Those who are victorious will inherit all this, and I will be their God and they will be my children.’” (Revelation 21:5-7)

In the Revelation, we read: “Each of the four living creatures had six wings and was covered with eyes all around, even under its wings. Day and night they never stop saying: ‘Holy, holy, holy is the Lord God Almighty, who was, and is, and is to come.’ Whenever the living creatures give glory, honor and thanks to him who sits on the throne and who lives for ever and ever, the twenty-four elders fall down before him who sits on the throne and worship him who lives for ever and ever. They lay their crowns before the throne and say: ‘You are worthy, our Lord and God, to receive glory and honor and power, for you created all things, and by your will they were created and have their being.’” (Revelation 4:8-11)

In another position, we read: “And the seventh angel sounded; and there were great voices in heaven, saying, the kingdoms of this world are become the kingdoms of our Lord, and of his Christ; and he shall reign for ever and ever. And the four and twenty elders, which sat before God on their seats, fell upon their faces, and worshipped God, Saying, We give thee thanks, O LORD God Almighty, which art, and wast, and art to come; because thou hast taken to thee thy great power, and hast reigned.” (Revelation 11:15-17)

We also read: “Then I heard the angel in charge of the waters say: ‘You are just in these judgments, O Holy One, you who are and who were; for they have shed the blood of your holy people and your prophets, and you have given them blood to drink as they deserve.’ And I heard the altar respond: ‘Yes, Lord God Almighty, true and just are your judgments.’” (Revelation 16:5-7)

The above verses indicate that the one described as “the Alpha and the Omega” is God for “the Lord, which is, and which was, and which is to come, the Almighty”, “seated on the throne”, and “will be their God” are such descriptions which apply only to God according to the above verses.

Jesus is not the one given such descriptions for he is not Almighty. None is described as “Almighty” in the New Testament except God. It is Jesus who said about himself: “Very truly I tell you, the Son can do nothing by himself; he can do only what he sees his Father doing, because whatever the Father does the Son also does. (John 5:19)

Moreover, none is described as “seated on the throne” in the New Testament except God. Jesus is rather described as sitting down at the right hand of the throne.

We read: “Now the main point of what we are saying is this: We do have such a high priest, who sat down at the right hand of the throne of the Majesty in heaven” (Hebrews 8:1)

We also read: “Let us fix our eyes on Jesus, the author and perfecter of our faith, who for the joy set before him endured the cross, scorning its shame, and sat down at the right hand of the throne of God.” (Hebrews 12:2)

Furthermore, nowhere in the New Testament did Jesus say that he would be anybody’s God. None said that in the New Testament except God. We read: “What agreement is there between the temple of God and idols? For we are the temple of the living God. As God has said: ‘I will live with them and walk among them, and I will be their God, and they will be my people.’ Therefore, ‘Come out from them and be separate, says the Lord. Touch no unclean thing, and I will receive you.’ And, ‘I will be a Father to you, and you will be my sons and daughters, says the Lord Almighty.’” (2 Corinthians 6:16-18)

In the New Testament, Jesus is often quoted as having a god. How can Jesus be God if he himself has God? We read: Jesus answered him, “It is also written: ‘Do not put the Lord your God to the test.'” (Matthew 4:7) We also read: Jesus said to him, “Away from me, Satan! For it is written: ‘Worship the Lord your God, and serve him only.’” (Matthew 4:10) Besides, we read: “And about the ninth hour Jesus cried with a loud voice, saying, Eli, Eli, lama sabachthani? that is to say, My God, my God, why hast thou forsaken me?” (Matthew 27:46)

As for “the Beginning and the End”, it can be a description of God only. Jesus is rather described as the firstborn in the New Testament. We read: “and giving joyful thanks to the Father, who has qualified you to share in the inheritance of his holy people in the kingdom of light. For he has rescued us from the dominion of darkness and brought us into the kingdom of the Son he loves, in whom we have redemption, the forgiveness of sins. The Son is the image of the invisible God, the firstborn over all creation. (Colossians 1:12-15)

We also read: “Write this letter to the angel of the church in Laodicea. This is the message from the one who is the Amen–the faithful and true witness, the beginning of God’s new creation” (Revelation 3:14)

Even Jesus’ description as the firstborn or the beginning of God’s creation is also incorrect and considered one of the main Christian misconceptions. Maybe, the reason why Jesus is so described is that he is referred to as the Word of God and that the world began with a word “Be” and will also end with a word from God.

However, Jesus is not all words of God with which He begins and ends things. He is rather a word sent to Mary at some point of time. That is why he is called the “Word of God”, i.e. the one whose creation was begun through a word from God without any other means, be it dust like Adam, a rib like Eve or semen like any other human being.

As for “the First and the Last”, it also can be a description of God only according to the Bible. This is frequently repeated in the Chapter of Isaiah. We read:

“Be silent before me, you islands! Let the nations renew their strength! Let them come forward and speak; let us meet together at the place of judgment. Who has stirred up one from the east, calling him in righteousness to his service? He hands nations over to him and subdues kings before him. He turns them to dust with his sword, to windblown chaff with his bow. He pursues them and moves on unscathed, by a path his feet have not traveled before. Who has done this and carried it through, calling forth the generations from the beginning? I, the Lord—with the first of them and with the last—I am he.” (Isaiah 41:1-4)

We also read: “This is what the LORD says– Israel’s King and Redeemer, the LORD Almighty: I am the first and I am the last; apart from me there is no God.” (Isaiah 44:6)

We further read: “Listen to me, Jacob, Israel, whom I have called: I am he; I am the first and I am the last. My own hand laid the foundations of the earth, and my right hand spread out the heavens; when I summon them, they all stand up together. (Isaiah 48:12-13)

Here, several questions arise: how can Jesus be the first of God’s creation though his mother had not been created yet? Did Jesus exist before Mary? If he did, why did Mary exist? Why did she give birth to him?

Ironically, the Genesis does not make any mention of Jesus. It rather states that Adam is the first of the human creation and then Eve existed. Where was Jesus then?

In the New Testament, we read: “I do not permit a woman to teach or to exercise authority over a man; rather, she is to remain quiet. For Adam was formed first, then Eve” (1 Timothy 2:12–13)

Accordingly, where was Jesus when Adam was created though the Old Testament states that there was no man before Adam?