Islam and Belief in the Hereafter 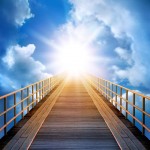 The way to protect ourselves is through seeking the knowledge of divine guidance.

All of mankind was created by Almighty God. Before giving us worldly life, He took a covenant from each of us. The implication of this pledge is that all human beings are born inherently aware that the One God is their Lord, Creator, and Master and that to deny that by either denying God or setting up other God’s beside Him will be the ultimate treachery. This covenant is as follows:

And when your Lord took from the children of Adam and their descendants a covenant and made them testify, saying to them ‘Am I not your Lord’? They (mankind) replied, ‘Yes. We testify’. (This testimony) is lest you would say on the Day of Judgment ‘Surely we were unaware of this’. Or lest you should say, ‘It was our forefathers who associated with You in worship (or didn’t believe in you) and we were just their descendants. So would you destroy us for the lies they (our forefathers) spread’. (Al-A`raf 7:172)

Not only does this covenant explain the natural faith in a Supreme Creator that we are all born with, it is also rejects allowing one’s family’s religion to be adopted and followed as a culture in most cases. The Prophet Muhammad (peace be upon him) expounds upon this meaning: “No child is born but upon Fitra. It is his parents who make him a Jew or a Christian or a Polytheist.” (Muslim)

Life Is a Test

The reality is that we will all inevitably die. So, what is the purpose of life? Mainly about recognizing and nurturing the pure monotheism, life is a test of our loyalty to God. This test can be explained in two verses:

Everyone will taste death. We will test you with the bad and the good as a trial upon your patience and to us you will be returned for judgment. (Al-Anbiyaa’ 21:35)

One part of the test is to be patient when afflicted with difficulties and thankful when blessed with the good things in life like health, beauty and wealth etc. The other part of the test is to seek God’s guidance and apply it. The more one applies the guidance of the Almighty, the more he/she becomes a good person performing good works for the wellbeing of his or her self and society. The Qur’an illustrates this for us:

He is the One who created death and life to test you as to which of you is best in deed. (Al-Mulk 67:2)

This guidance is generally known by our inherent nature, but only clearly and comprehensively known through the message sent with a Prophet of God as previously mentioned. Here, the question may arise; Muslims believe that all of the previous Prophets’ messages were corrupted by the priests and rabbis, so what about the people who lived an honest decent life, but throughout their life they didn’t have access to the correct message of Islam as taught by the Prophet who was sent to their nation? The Prophet Muhammad answered this for us” “There are four people who will come forth on the Day of Judgment put forth their argument as to their excuse for not following God’s guidance. They are a deaf person, a retarded or mentally challenged person, an old man who was called to Islam and was senile so couldn’t comprehend, and someone who lived their whole life in a time and place that didn’t receive the pure message. All of their excuses will be deemed valid and God will send them an angel and tell these groups that this angel is His messenger and to follow him. The angel will kindle a blazing fire and command the people to enter. Whoever enters it will go to heaven and whoever doesn’t then they will have brought upon themselves the punishment of Hell. (Al-Bayhaqi)

The Hereafter has different phases. We will summarize the main points of the Hereafter according to the book of God and the Sunnah of His final Messenger (peace be upon him). The Hereafter begins when we die. When anyone dies, they will remain in their grave (or final resting point) and experience visions of their final abode whether it be heaven or hell. They are waiting for the appointed day when God will call for the destruction of the universe and beginning of the Day of Judgment. After the universe is destroyed, only God and what He exempts will remain. God will then recreate the earth and some other celestial bodies. He will then resurrect all people from their graves in the physical form they died in. Then, He will give everyone’s book of deeds. Everyone will now await their judgment which depends upon the weight of their good deeds against their bad deeds. In the end, all of the people in history will either go to Heaven or Hell. Heaven is the land of peace where the believers will live eternally indulging in their desires as they wish and other delights and pleasures which they never imagined. The most blessed thing they will have is the sight of their Maker. The Almighty says:

(It will be said to them) “Enter it in peace. This is the day of Eternity.” They will have whatever they desire therein and We have more for them (or something extra special – as the authentic texts tell us we will see God). (Qaf 50:34, 35)

Those are the companions of Paradise. They will abide therein eternally. And we will remove from their hearts any jealousy or resentments. (Al-A`raf 7:43)

This authentic hadith gives us detail: “(Upon entering Paradise) A caller calls “You are to be healthy and never to get sick again, you are to live and never to die again, you are to be young and never to be old again, and you are to feel happiness living in pleasure and you will never feel miserable or sad again.” (Al-Bukhari) The one guaranteeing factor which will lead one to paradise is that they believe in the Oneness of God and followed the message sent with a given Prophet and repented after having sinned. The one factor which guarantees one a place in Hell is to deny God (i.e. Allah) or to worship other than him after being called to the pure monotheism. The Almighty Allah says,

Indeed God does not forgive that you associate with him in divinity or worship, but He forgives all other sins to whom He wills. And He who associates others with God has indeed fabricated a tremendous sin. (An-Nisaa’ 4:48)

Those who die while rejecting God or while worshipping other than Him are doomed to Hell for eternity. This is for indulging in the greatest treachery to the one who not only created us, but provided us with innumerable blessings throughout life. There are also many believers in the Oneness of God who worshipped him exclusively but will go to Hell for a time to pay for the evil they committed. They will go to Hell because their evil deeds, innovations, insincerity and neglect to follow God’s guidance, that exceeded their good deeds. Hell is the worst thing that could happen to anyone. The Almighty warns us about straying from the straight path that He made for us,

Those who reject Our guidance, We shall soon cast into the Fire; as often as their skins are roasted, We will replace them with fresh skins, that they may feel the Punishment: for God is Exalted in Power, All-Wise. (An-Nisaa’ 4:56)

If they implore relief they will be granted molten brass that will scald their faces: What a dreadful drink! What a horrible abode! (Al-Kahf 18:29)

(In their immense thirst) they will be given water from a boiling spring. (In their hunger) There will be nothing put poisonous thorny plants. (Al-Ghashiyah 88:5, 6)

The Prophet described the extent of the horrors of the Hell-Fire: “The least tormented man in hell on the Day of Judgment is a man who has coals put under the sole of his feet which are so hot that the blood in his brain begins to boil”. (Al-Bukhari) Although, before our death, the door of repentance is wide open even for atheists and polytheists:

Say, ‘O My servants who have transgressed against themselves by sinning, do not despair of the Mercy of God. Certainly, He forgives all sins. Indeed it is Him who is The Forgiving and The Merciful. (Az-Zumar 39:53)

That’s why God Almighty commands us:

O you who believe, protect yourselves and your families from the Hell-Fire… (At-Tahrim 66:6)

The way to protect ourselves is through seeking the knowledge of divine guidance and purifying our hearts by pondering on its wisdoms and applying it in our daily lives. This will create a change in us and we will truly become spiritual beings and not just claim to be believers in God based upon our own assumption without weighing that against the example laid out by the noble Prophets of God (peace be upon them) and their devout followers.