Jesus’s name was given to Mary as her coming son. It was only after his baptism at the hands of John the Baptist that he – Jesus – claimed to be the Christ.

“When eight days were accomplished for the circumcising of the child, his name was called Jesus, which was so named of the angel before he was conceived in the womb.” (Luke 2:21)

Christ is not a name. It is, rather, a title. It is a translation of the Hebrew word Messiah, meaning “anointed.” The Greek word for “anointed” is “Christos”, from which we get the word Christ.

Priests and kings were “anointed” when being consecrated to their office. The Bible confers this title even on a heathen king Cyrus.

“This is what the Lord says to his anointed, to Cyrus, whose right hand I take hold of to subdue nations before him and to strip kings of their armor, to open doors before him so that gates will not be shut. ” (Isaiah 45:1) 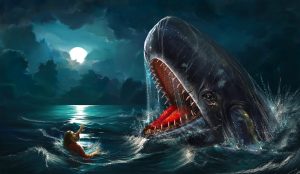 The Jews wanted a proof that he was the Christ:

“Then some of the Pharisees and teachers of the law said to him, ‘Teacher, we want to see a sign from you.’” (Matthew 12:38)

God commanded Jonah to go to Nineveh and warn the Ninevites.

“But let man and beast be covered with sackcloth, and cry mightily unto God: yea, let them turn everyone from his evil way, and from the violence that is in their hands.” (Jonah 3:8)

But Jonah was hesitant to go as a Warner unto the Ninevites, so he went to Joppa instead of Nineveh, and takes a boat to run away from the Lord’s command.

While he was in the boat, there was a terrible storm. According to the superstition of the sailors at that time, the storm was an indication to the existence of a person who ran away from his Master’s command.

Then the sailors said to each other:

“.,come, let us cast lots to find out who is responsible for this calamity. They cast lots and the lot fell on Jonah. ” (Jonah 1:7)

When Jonah was thrown in the sea, great fish swallowed him, while he was still alive.

For three days and three nights Prophet Jonah was alive till the fish throw him out to the seashore.

Jesus prophesied about himself saying:

If Jonah was alive for three days and three nights, then Jesus also had to have been alive in the tomb according to this prophecy! But in Christianity is based on the death of Jesus for humanity.

Jonah alive, Jesus dead! Very unlike Jonah! Jesus said “like Jonah” not unlike Jonah. if this is true then according to his own test Jesus is not the true messiah of the Jews.

According to the Bible the Jews were in a hurry to eliminate Jesus. Hence the midnight trial, and then sending him to Pilate in the morning; from Pilate to Herod and then back again to Pilate.

They were afraid of the public’s feelings as Jesus was their hero. Therefore, as much as they were in a hurry to hang him on the cross, they were in equal hurry to bring him down from the cross before sunset on Friday because of the Sabbath.

The Sabbath starts at about 6 p.m. on Friday. According to the Bible the victim of crucifixion was an “accursed of God” and was not to be permitted to remain hanging on the Sabbath day.

“you must not leave the body hanging on the pole overnight. Be sure to bury it that same day, because anyone who is hung on a pole is under God’s curse. You must not desecrate the land the Lord your God is giving you as an inheritance. ” (Deuteronomy 21:23)

The body was taken from the cross, and was given the Jewish burial-bath.

“He was accompanied by Nicodemus, the man who earlier had visited Jesus at night. Nicodemus brought a mixture of myrrh and aloes, about seventy-five pounds.” (John 19:39)

Then the body was placed into the grave before night-fall.

Jesus was unlike Jonah, who was alive in the belly of the fish, which is the exact opposite of what was claimed that happened to Jesus, who was dead for the same period of time as Jonah was alive.

In addition, the time factor, three days and three nights. As according to the Bible that it was “before sunrise” on Sunday morning (the first day of the week), that Mary Magdalene went to the grave of Jesus and found it empty. Sunday morning subtracting 3 days and 3 nights, Jesus had to die on Wednesday not Friday to fulfill this prophecy. So, we can easily reject this prophecy and consider it as an addition to the Bible.