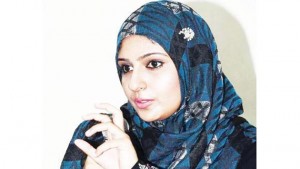 She liked the principles of Islam and hence, took the decision to join the world’s fastest growing religion.

To be a Muslim, well-known young Indian actress Monica bade adieu to her film career, leaving behind the glamorous and the bright lights of fame, Times of India reported.

“I have not convert for the reason of love or money, am not such a person. I like Islamic principles. This is why I have converted to Islam,” she said after reverting to Islam.

“Hereafter I won’t act in the film, it gives some pain but I don’t change my mind,” the young actress added.

According to Indian media, Monica’s decision was announced during a news conference in which she released photos showing her wearing traditional modest costume and a hijab. She has also changed her name to MG Rahima

At the press conference Monica added that she liked the principles of Islam and hence, took the decision to join the world’s fastest growing religion.

The Azhagi actress started her career as a child artist in Tamil cinema and has acted in more than 50 films.

She is also the popular face in other South Indian film industries like Telugu, Malayalam and Kannada.

Monica, who had won Tamil Nadu State Award as a best child actor for her performance in Vijaykanth starrer En Aasai Machan, is known for few of the Tamil movies like Azhagi, Imsai Arasan 23m Pulakesi and Silandhi.

Monica is not the first Indian celebrity to revert to Islam this year. After musicians AR Rahman and Yuvan Shankar Raja, Monika is the latest to join the bandwagon of those who converted to Islam is.