The Holy Month of Ramadan

What is Ramadan and How Do Muslims Fast? 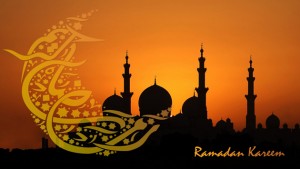 Ramadan is the Month of Positive Transformation

Ramadan is the ninth month of the Islamic lunar calendar, throughout which Muslims around the world spend the daylight hours (from dawn to sunset) in complete fast.

During the daylight hours throughout the holy month of Ramadan, Muslims all over the world abstain from food, drink, sexual enjoyment and physical or verbal abuse. In fact, fasting is much more than just refraining from eating and drinking. It is a time for the purification of the soul and the development of God-awareness and self-control.

Abu Hurairah narrated: God’s Messenger said, “Fasting is a shield. So, the person observing fast should avoid sexual relation with his wife and should not behave foolishly and impudently, and if somebody fights with him or abuses him, he should tell him twice, ‘I am fasting.’” The Prophet added, “By Him in Whose Hands my soul is, the smell coming out from the mouth of a fasting person is better in the sight of God than the smell of musk. (God says about the fasting person), ‘He has left his food, drink and desires for My sake. Fast is for Me. So I will reward (the fasting person) for it, and the reward of good deeds is multiplied ten times.’” (Al-Bukhari)

Is Fasting Obligatory throughout Ramadan?

What if a Muslim cannot Observe Fasting throughout Ramadan?

There are few temporary and permanent exceptions to the rule. The Muslims who cannot observe fasting for temporary reasons, like menstruating, pregnant, nursing, and confined women, as well as sick and traveling people, must make up for the days during which they break fasting any time after Ramadan.

Those Muslims who cannot observe fast for permanent reasons, like the elderly and the ill people, must pay ransom as represented in feeding one poor person by giving him/her a filling meal to eat as an atonement for each day of Ramadan on which fasting is broken.

As for a Muslim who does not observe fasting during Ramadan though he/she can observe it, he/she is to make up for the day(s) on which fasting is broken and, in case of sexual intercourse, even make expiation (freeing a slave, observing fast for two successive months without break or feeding sixty poor people respectively).

A Muslim who does not observe fasting throughout Ramadan or does not believe that fasting is obligatory cannot be deemed to be Muslim.

The following verses deal with the rulings on fasting during Ramadan:

[Fasting for] a limited number of days. So whoever among you is ill or on a journey [during them] – then an equal number of days [are to be made up]. And upon those who are able [to fast, but with hardship] – a ransom [as substitute] of feeding a poor person [each day]…

So whoever sights [the new moon of] the month, let him fast it; and whoever is ill or on a journey – then an equal number of other days. God intends for you ease and does not intend for you hardship… (Al-Baqarah 2:184-185)

What are the Benefits of Fasting?

Fasting can reduce some risks for heart disease and diabetes and maybe even cancer. Fasting actually improves insulin sensitivity. When your cells are sensitive to the effects of insulin, they do a much better job modulating your blood sugar levels after meals and this makes life a lot easier for your poor old pancreas. Loss of insulin sensitivity is a risk factor for both heart disease and diabetes.

Fasting also reduces oxidative stress and inflammation in cells. Many theorize that this helps prevent and repair DNA damage that could otherwise develop into cancer. There’s even some research suggesting that fasting slows the little clocks that tick inside our mitochondria and trigger senescence, or aging. In other words, fasting might help us live longer by keeping our organs youthful.

Is Fasting a Purely Islamic Act of Worship?

Fasting as an act of worship was not invented by Islam. It was rather enjoined by the previous divine messages. In the Qur’an, God says:

O you who have believed, decreed upon you is fasting as it was decreed upon those before you that you may become righteous. (Al-Baqarah 2:183)

Fasting was ordained in the Old Testament. We read: “Yet even now,” declares the Lord, “return to me with all your heart, with fasting, with weeping, and with mourning.” (Joel 2:12)

Not only fasting but also sincerity in fasting is ordained in the New Testament. We read: “And when you fast, do not look gloomy like the hypocrites, for they disfigure their faces that their fasting may be seen by others. Truly, I say to you, they have received their reward. But when you fast, anoint your head and wash your face, that your fasting may not be seen by others but by your Father who is in secret. And your Father who sees in secret will reward you.” (Matthew 6:16-18)

Is Fasting the Only Act of Worship to be Done in Ramadan?

Unlike the other months of the year, Ramadan involves all acts of worship that can be done anytime during the year. It encompasses, among other acts of worship, all pillars of Islam after the testimony of faith. It comprises prayer, alms, fasting, and voluntary minor pilgrimage which is equivalent to major pilgrimage.

Other acts of worship to be done in Ramadan include the recitation of the Qur’an, feeding the hungry, supplication, frequent remembrance of God, and I`tikaf (religious retreat).

Why Do Muslims Fast?

Fasting develops our powers of self-control, self-restraint, self-denial and self-improvement, brings a Muslim closer to God by boosting his/her God-consciousness and God-awareness, inspires charity, generosity and sympathy with the suffering of the others and reminds of the greatness of the blessings of God.

What are the Merits of Ramadan?

Unlike any other month, the holy month of Ramadan has many exclusive merits, which include but are not limited to the following:

What is the Reward for Worship throughout Ramadan?

The reward for observing fast throughout Ramadan is the forgiveness of the past sins. Abu Hurairah narrated that Prophet Muhammad said: “Whoever observes fasting during the month of Ramadan out of sincere faith, and hoping to attain God’s reward, then all his past sins will be forgiven.” (Al-Bukhari)

Ramadan conduces to Paradise. Abu Hurairah reported that Prophet Muhammad said, “When the month of Ramadan starts, the gates of Paradise are opened, the gates of Hell-fire are closed and the devils are chained up.” (Al-Bukhari)