The Greatest Prophets between Christianity and Islam: 3-Prophet Noah 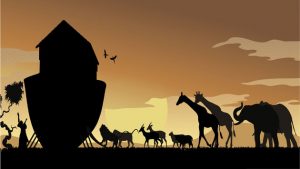 Prophet Noah was one of the earliest prophets. Later prophets belonged to his progeny after the Great Deluge and the ensuing annihilation of the disbelievers.

While both Christianity and Islam agree on honoring and praising this great prophet, Christianity, unfortunately, ascribes to him such sins which cannot be attributed to the godly out of the ordinary people not to mention the prophets of God.

Therefore, Islam is considered more respectful of this noble prophet as the Qur’an corrects the distorted image painted by the Bible and paints the true image that beseems him as we will see.

Christianity praises Prophet Noah in the Bible. It tells us that God destroyed the disbelievers from the face of the earth and delivered only Noah and his followers.

In the Old Testament, we read: And the Lord said, “I will destroy man whom I have created from the face of the earth, both man and beast, and the creeping thing and the fowls of the air, for I repent that I have made them.” But Noah found grace in the eyes of the Lord. These are the generations of Noah. Noah was a just man and perfect in his generations, and Noah walked with God. (Genesis 6:7-9)

In the New Testament, we read: “By faith Noah, being warned by God of things not yet seen, moved with fear, prepared an ark for the saving of his house, by which he condemned the world and became heir of the righteousness which is by faith.” (Hebrews 11:7)

We also read: “And spared not the old world, but saved Noah, the eighth person, a preacher of righteousness, bringing in the Flood upon the world of the ungodly.” (2 Peter 2:5)

Islam honors and praises Noah at many positions in the Qur’an. For example, the Qur’an tells us that Noah was one of the prophets whom God chose and preferred to the worlds. We read:

The Qur’an also tells us that Noah was one of the prophets whom God guided and revealed to. We read:

Indeed, We have revealed to you, [O Muhammad], as We revealed to Noah and the prophets after him. And we revealed to Abraham, Ishmael, Isaac, Jacob, the Descendants, Jesus, Job, Jonah, Aaron, and Solomon, and to David We gave the book [of Psalms]. (An-Nisaa’ 4:163)

And We gave to Abraham, Isaac and Jacob – all [of them] We guided. And Noah, We guided before; and among his descendants, David and Solomon and Job and Joseph and Moses and Aaron. Thus do We reward the doers of good. (Al-An`am 6:84)

Moreover, the Qur’an states that Noah was a grateful servant. We read:

And We gave Moses the Scripture and made it a guidance for the Children of Israel that you not take other than Me as Disposer of affairs, O descendants of those We carried [in the ship] with Noah. Indeed, he was a grateful servant. (Al-Israa’ 17:2-3)

Furthermore, the Qur’an praises Prophet Noah as a righteous, believing servant of God. We read:

(In the days of old), Noah cried to Us, and We are the best to hear prayer. And We delivered him and his people from the Great Calamity, And made his progeny to endure (on this earth); And We left (this blessing) for him among generations to come in later times: “Peace and salutation to Noah among the nations!” Thus indeed do we reward those who do right. For he was one of our believing Servants. (As-Saffat 37:75-81)

Therefore, God made prophets out of Noah’s progeny. We read:

The Christian image of Noah as a drunkard does not beseem him as a prophet. The Islamic image better suits a prophet. In Islam, a prophet does not drink wine or get drunken or uncovered.

We do not come across such allegations in Islam, especially the Qur’an. The utmost thing against Noah in the Qur’an is just blame for a prayer he made for a disbelieving son of his. We read:

And Noah called to his Lord and said, “My Lord, indeed my son is of my family; and indeed, Your promise is true; and You are the most just of judges!” He said, “O Noah, indeed he is not of your family; indeed, he is [one whose] work was other than righteous, so ask Me not for that about which you have no knowledge. Indeed, I advise you, lest you be among the ignorant.” [Noah] said, “My Lord, I seek refuge in You from asking that of which I have no knowledge. And unless You forgive me and have mercy upon me, I will be among the losers.” It was said, “O Noah, disembark in security from Us and blessings upon you and upon nations [descending] from those with you. But other nations [of them] We will grant enjoyment; then there will touch them from Us a painful punishment.” (Hud 11:45-48)

It is ironic that the Bible itself, including the Old Testament and the New Testament, prohibits drinking wine and intoxication. In the Old Testament, we read: And the Lord spoke unto Aaron, saying, “Do not drink wine nor strong drink, thou, nor thy sons with thee, when ye go into the tabernacle of the congregation, lest ye die. It shall be a statute forever throughout your generations, that ye may put difference between holy and unholy, and between unclean and clean, and that ye may teach the children of Israel all the statutes which the Lord hath spoken unto them by the hand of Moses.” (Leviticus 10:8-11)

Just as the Bible prohibits drunkenness, it orders soberness and good behavior. We read: “A bishop then must be blameless, the husband of one wife, vigilant, sober, of good behavior, given to hospitality, apt at teaching; not given to wine, not violent, not greedy for filthy lucre, but patient, not a brawler, not covetous” (1 Timothy 3:2-3)

If the Bible prohibits drinking wine, intoxication and dissolution and orders soberness and good behavior, how come a great prophet like Noah drinks wine or gets drunken or uncovered?

Islam Was the Religion of Adam and Noah, a Jewish Rabbi Says