The Greatest Prophets between Christianity and Islam: 9-Prophet Jacob 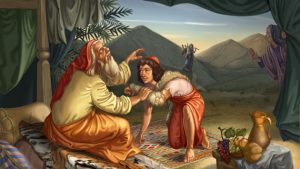 Jacob’s character in the Bible is remarkable for usuriousness, deceit and the feelings of transcendence and superiority

Though Christianity and Islam concur on honoring Prophet Jacob, Jacob in the Qur’an in particular and Islam in general is totally different from Jacob in the Bible, especially the Old Testament. Let’s have a look at what the Qur’an and the Bible say about Jacob.

Jacob’s character in the Bible, especially the Old Testament, is quite typical of the Jewish, Israeli personality, which is remarkable for usuriousness, deceit and the feelings of transcendence and superiority.

It is ironic that the stated feelings of superiority and transcendence are intended even against God Himself. The word “Israel” itself as another name of Jacob indicates victory over God. In the Old Testament, we read:

Jacob was left alone, and a man wrestled with him until daybreak. When the man saw that he could not defeat him, he struck Jacob’s hip socket as they wrestled and dislocated his hip. Then he said to Jacob, “Let me go, for it is daybreak.” But Jacob said, “I will not let you go unless you bless me.” “What is your name?” the man asked. “Jacob,” he replied. “Your name will no longer be Jacob,” he said. “It will be Israel because you have struggled with God and with men and have prevailed.” Then Jacob asked him, “Please tell me your name.” But he answered, “Why do you ask my name?” And he blessed him there. Jacob then named the place Peniel, “For I have seen God face to face,” he said, “yet my life has been spared.” (Genesis 32:24-30)

In the Old Testament, we read: He said to Jacob, “Let me eat some of that red stuff, because I’m exhausted.” That is why he was also named Edom. Jacob replied, “First sell me your birthright…” (Genesis 25:30-31)

Moreover, the Bible tells us that Jacob obtained his brother’s deserved blessing by deception. In the Bible, we read: Jacob replied to his father, “I am Esau, your firstborn. I have done as you told me. Please sit up and eat some of my game so that you may bless me.”… But he replied, “Your brother came deceitfully and took your blessing.” So he said, “Isn’t he rightly named Jacob? For he has cheated me twice now. He took my birthright, and look, now he has taken my blessing.” Then he asked, “Haven’t you saved a blessing for me?” But Isaac answered Esau, “Look, I have made him a master over you, have given him all of his relatives as his servants, and have sustained him with grain and new wine. What then can I do for you, my son?” (Genesis 27:19-37)

Despite the deceit and feeling of superiority attributed to Jacob’s character in the Bible, we notice that the Bible tries to improve his image by plagiarizing situations from the biographies of Abraham and Isaac, so that Jacob’s character will seem more acceptable.

For example, the Bible tells us that just as God changed Abraham’s name from “Abram” to “Abraham” (Genesis 5:17), He also changed Jacob’s name from “Jacob” to “Israel”.

We read: God appeared to Jacob again after he returned from Paddan-aram, and he blessed him. God said to him, “Your name is Jacob; you will no longer be named Jacob, but your name will be Israel.” So he named him Israel. (Genesis 35:9-10)

The Bible also tells us that just as the beloved wives of Abraham and Isaac, Sarah and Rebekah, were barren (Genesis 11:30), (Genesis 25:21-23), Jacob’s beloved wife, Rachel, was barren also. We read:

When Rachel saw that she was not bearing Jacob any children, she envied her sister. “Give me sons, or I will die!” she said to Jacob. Jacob became angry with Rachel and said, “Am I in God’s place, who has withheld offspring from you?” Then she said, “Here is my maid Bilhah. Go sleep with her, and she’ll bear children for me so that through her I too can build a family…” (Genesis 30:1-3)

Islam honors and praises Prophet Jacob as one of the greatest prophets but without discrimination. In the Qur’an, we read:

For example, Prophet Jacob is described as a prophet with a reputation of high honor. In the Qur’an, we read:

The Qur’an tells us that God blessed Jacob and made him a prophet from among the righteous. We read: