Is God: Jesus, Jesus and Mary, the third of three or the Clergy in Christianity according to the Qur’an? 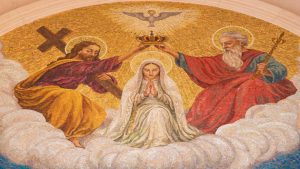 Is God: Jesus, Jesus and Mary, a third of three or the Clergy in Christianity according to the Qur’an?

In fact, there are no contradictions in the Qur’an either in this regard or otherwise. The Qur’an’s enumeration of diverse Christian beliefs in God is attributable to two main reasons: the first reason is the diversity in the Christian denominations’ beliefs in God both in the past and at present. The second reason is the Islamic and Qur’anic usage of the real and correct concepts of godhood and lordship compared to the mistaken Christian concepts of godhood and lordship.

Let’s review the Christian beliefs in God as cited by the Qur’an in order to conclusively evidence the Christians’ actual faith in those contradictory beliefs both in the past and at present.

Do Christians Say that Jesus Christ is God?

They have certainly disbelieved who say that God is the Christ, the son of Mary. Say, “Then who could prevent God at all if He had intended to destroy the Christ, the son of Mary, or his mother or everyone on the earth?” And to God belongs the dominion of the heavens and the earth and whatever is between them. He creates what He wills, and God is over all things competent. (Al-Ma’idah 5:17)

They have certainly disbelieved who say, “God is the Christ, the son of Mary” while the Christ has said, “O Children of Israel, worship God, my Lord and your Lord.” Indeed, he who associates others with God – God has forbidden him Paradise, and his refuge is the Fire. And there are not for the wrongdoers any helpers. (Al-Ma’idah 5:72)

And Thomas answered and said unto Him, “My Lord and my God!” (John 20:28) (Click here and there for refutation)

Do Christians Say that Jesus Christ is the Son of God?

The Jews say, “Ezra is the son of God“; and the Christians say, “The Christ is the son of God.” That is their statement from their mouths; they imitate the saying of those who disbelieved [before them]. May God destroy them; how are they deluded? (At-Tawbah 9:30)

Christians actually say that Jesus Christ is the only begotten son of God. They cite as evidence (refuted) biblical verses as follows:

But Jesus held His peace. And the high priest answered and said unto Him, “I adjure thee by the living God that thou tell us whether thou be the Christ, the Son of God.” Jesus said unto him, “Thou hast said; nevertheless I say unto you, hereafter shall ye see the Son of Man sitting at the right hand of Power, and coming in the clouds of heaven.” (Matthew 26:63-64) (Click here for refutation)

Do Christians Take Jesus Christ and his Mother, Mary, as Gods?

And [beware the Day] when God will say, “O Jesus, Son of Mary, did you say to the people, ‘Take me and my mother as deities besides God?'” He will say, “Exalted are You! It was not for me to say that to which I have no right. If I had said it, You would have known it. You know what is within myself, and I do not know what is within Yourself. Indeed, it is You who is Knower of the unseen. (Al-Ma’idah 5:116)

Though Mary is not included in the contemporary Holy Trinity, Christians believe in her divinity despite the dogmatic differences among their denominations. 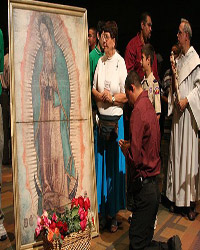 As for those Christians who explicitly take Mary as deity, they include old and contemporary Christian denominations.

As far as the old denominations are concerned, they, for example, include the Collyridianism. It was an Early Christian movement in the pre-Islamic Arabia whose adherents worshipped the Virgin Mary, mother of Jesus, as a goddess. The main source of information about them comes from their strongest opponent, Epiphanius of Salamis, who wrote about them in his Panarion of about 375 AD. According to Epiphanius, certain women in then-largely-pagan Arabia syncretized indigenous beliefs with the worship of Mary, and offered little cakes or bread-rolls. Such a denomination still exists but has relatively limited presence. 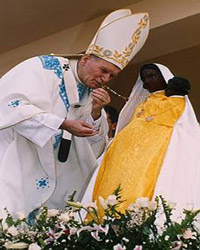 As for the contemporary denominations, they include the Mormonism or the Latter Day Saint Movement. This denomination believes in the concept of “the heavenly mother” that is the mother of the human mothers and the wife of God the Father.

As for those who implicitly take Mary as a deity, they include all other contemporary Christian denominations. According to most Christian denominations, Mary is the “Mother of God” or “God-bearer”. She is also called the “Queen of Heaven”, “Queen Mother” since she was the mother of Jesus, who was sometimes referred to as the “King of Kings” due to his ancestral descent from King David. She is also deemed the “Heavenly Woman of Revelation”. Some Catholics believe that she is a “Mother Goddess”

Though most contemporary Christian denominations deny Mary’s divinity, they say and do things which confirm her divinity according to the real and correct concept of divinity.

For example, Christians pray to Mary so that she will intercede for them. Furthermore, they draw paintings, images and icons for her, erect statues, worship and prostrate themselves before those paintings, images, icons and statues.

Such are nothing but acts of worship for and deification of Mary. According to the real and correct concept of divinity, only God is prayed to, worshiped and prostrated before.

Do Christians Say that God is the Third of Three?

They have certainly disbelieved who say, “God is the third of three.” And there is no god except one God. And if they do not desist from what they are saying, there will surely afflict the disbelievers among them a painful punishment. (Al-Ma’idah 5:73)

O People of the Scripture, do not commit excess in your religion or say about God except the truth. The Messiah, Jesus, the son of Mary, was but a messenger of God and His word which He directed to Mary and a soul [created at a command] from Him. So believe in God and His messengers. And do not say, “Three”; desist – it is better for you. Indeed, God is but one God. Exalted is He above having a son. To Him belongs whatever is in the heavens and whatever is on the earth. And sufficient is God as Disposer of affairs. (An-Nisaa’ 4:171)

Though the alleged Holy Trinity is not found in the Bible, Christians actually say that God is the third of three according to the professions of faith, especially the Nicene Creed adopted at the First Council of Nicaea.

Though Christians claim that God is one but this one God has three persons, the person called “Father” is actually God according to the real and correct concept of divinity. The other two persons can never be God. Evidence for that in the Bible is uncountable. 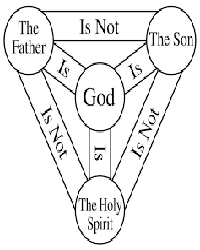 For example, we read: “So that you may be children of your Father in heaven. For he causes his sun to rise on the evil and the good, and sends rain on the righteous and the unrighteous.” (Matthew 5:45)

Another piece of evidence is denying Jesus the basic description of “good”, whereas this and better description “perfect” are given to God called “Father”.

About the Father’s description as “perfect”, we read: “Be perfect, therefore, as your heavenly Father is perfect.” (Matthew 5:48)

About denying Jesus the description of “good” and giving the same description to the Father, we read: And behold, one came and said unto Him, “Good Master, what good thing shall I do, that I may have eternal life?” And He said unto him, “Why callest thou Me good? There is none good but One, that is, God. But if thou wilt enter into Life, keep the commandments.” (Matthew 19:16-17)

Do Christians Take their Clergy as Lords?

They have taken their rabbis and clergy as lords besides God, and [also] the Messiah, the son of Mary. And they were not commanded except to worship one God; there is no deity except Him. Exalted is He above whatever they associate with Him. (At-Tawbah 9:31)

Though Christians deny taking their clergy as lords, they say and do things which confirm their lordship according to the real and correct concept of lordship.

For example, Christians believe in confession as one of the seven sacraments of the church. According to this sacrament, a Christian confesses one’s sin to a priest who will, in turn, forgive this sin.

Christians offer, as evidence for the priest’s authority to forgive sins, verses pertaining to the Christ’s students and disciples rather than the clergy in general. 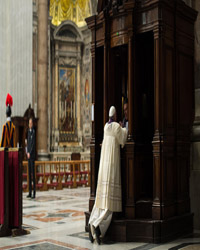 For example, Christians cite the following verse, which quotes a conversation between Jesus and his disciple, Peter. We read:

The Qur’an draws attention to the fact that many priests unjustly devour the property of Christians allegedly for the forgiveness of sins and the like. In the Qur’an, God says:

O you who have believed, indeed many of the rabbis and the priests devour the wealth of people unjustly and avert [them] from the way of God. And those who hoard gold and silver and spend it not in the way of God – give them tidings of a painful punishment. (At-Tawbah 9:34)

History confirms what the Qur’an says in this regard. It tells us that many popes and archbishops unjustly devoured Christians’ property and actually hoarded gold and silver. This was called simony. The abused indulgences were the best example of such simony in the Middle Ages. Unfortunately, many popes and archbishops of various churches were involved in simony and other equally corrupt practices.

The acts confirming the Christians’ deification of their priests according to the real and correct concept of lordship include some acts of worship like prostration, though prostration can be made only to God.

The stated acts also include doing what priests allow and refraining from what they prohibit though evidence for the same is sometimes not found in the Bible. God is the real legislator and taking someone else as a legislator is commensurate with taking others as lords along with Him.

Examples for misleading pontifical legislations include permitting, for example, prostration to paintings and statues, alcohol consumption, and pork eating and forbidding, for example, laic remarriage and clerical marriage.