God (Allah) is the Self-willed 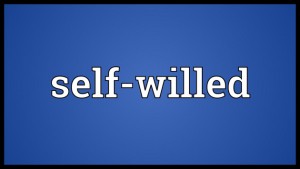 Since Jesus did not do what he willed but what God willed, Jesus cannot be God

One of the names and attributes of God is “Self-willed”, which is a quite intuitive description of God. Since God is the Creator, Provider, Sustainer and Disposer of the universe, He must be described as “Self-willed”.

Everything in the universe is subject to the will of God Only without a partner. A Creature cannot go against the will of God. Everything does the will of God, but God does His own will rather than that of anyone else for He is not held accountable for what He does, but others are.

God as Self-willed in Islam

In the Qur’an, God (called “Allah” in Arabic) is described as such “Self-willed” Lord Who does what He wills. We read:

Indeed, the vengeance of your Lord is severe. Indeed, it is He who originates [creation] and repeats. And He is the Forgiving, the Affectionate, Honorable Owner of the Throne, Doer of what He wills. (Al-Buruj 85:12-15)

The Qur’an confirms that God does what He wills. We read:

Indeed, Allah will admit those who believe and do righteous deeds to gardens beneath which rivers flow. Indeed, Allah does what He wills. (Al-Hajj 14:22)

Those messengers – some of them We caused to exceed others. Among them were those to whom Allah spoke, and He raised some of them in degree. And We gave Jesus, the Son of Mary, clear proofs, and We supported him with the Pure Spirit. If Allah had willed, those [generations] succeeding them would not have fought each other after the clear proofs had come to them. But they differed, and some of them believed and some of them disbelieved. And if Allah had willed, they would not have fought each other, but Allah does what He wills. (Al-Baqarah 2:253)

God as Self-willed in Christianity

Though Jesus is taken as God in Christianity, the Bible tells us that he was not “self-willed”, and he rather did what was willed by God (called “Father” in Christianity), Who sent him to people as a messenger and prophet.

For example, in the New Testament, we read: After walking a little farther, he quickly bowed with his face to the ground and prayed, “Father, if it’s possible, let this cup of suffering be taken away from me. But let your will be done rather than mine.” (Matthew 26:39)

We also read: Then he went away a second time and prayed, “Father, if this cup cannot be taken away unless I drink it, let your will be done.” (Matthew 26:42)

We further read: Jesus told them, “My food is to do what the one who sent me wants me to do and to finish the work he has given me.” (John 4:34)

Jesus’ statement that he did not do what he willed but what God willed is associated with his confirmation that he cannot do anything from his own but he could do things through the power of God. We read:

I can’t do anything on my own. As I listen to the Father, I make my judgments. My judgments are right because I don’t try to do what I want but what the one who sent me wants. (John 5:30)

Since Jesus did not do what he willed but what God willed, Jesus cannot be God. He was rather a prophet sent by God to do what God willed, that is, guiding people to the worship of the Lord of people Alone without partner.