God (Allah) is the Praiseworthy

One of the names and attributes of God is “the Praiseworthy ”, i.e. the Lord Who is praised and thanked by His creatures. Since God is the Creator, the Provider, the Sustainer and the Helper, He is worthy of praise and thank. Everyone is to praise and thank Him for they need Him, but He is too Self-sufficient to need anyone else. That is why He deserves to be described as “the Praiseworthy”, Who is praised by others but does not have to praise them. 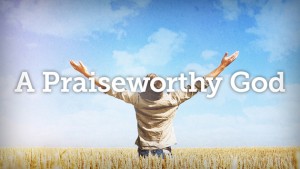 The Praiseworthy in Islam

In the Qur’an, God (called “Allah” in Arabic) is often described as “the Praiseworthy”. We read:

And Moses said, “If you should disbelieve, you and whoever is on the earth entirely – indeed, Allah is Free of need and Praiseworthy.” (Ibrahim 14:8)

Do you not see that Allah has sent down rain from the sky and the earth becomes green? Indeed, Allah is Subtle and Acquainted. To Him belongs what is in the heavens and what is on the earth. And indeed, Allah is the Free of need, the Praiseworthy. (Al-Hajj 22:63-64)

In Islam, all praise belongs to God. It is God Who is praised by everyone, but He does not have to praise anyone. For example, we read:

[All] praise is [due] to Allah, who created the heavens and the earth and made the darkness and the light. Then those who disbelieve equate [others] with their Lord. (Al-An`am 6:1)

The seven heavens and the earth and whatever is in them exalt Him. And there is not a thing except that it exalts [Allah] by His praise, but you do not understand their [way of] exalting. Indeed, He is ever Forbearing and Forgiving. (Al-Israa’ 17:44)

The praise of God is often commanded in the Qur’an. For example, we read:

And say, “Praise to Allah, who has not taken a son and has had no partner in [His] dominion and has no [need of a] protector out of weakness; and glorify Him with [great] glorification.” (Al-Israa’ 17:111)

Thank for God is also commanded and urged in the Qur’an. For example, we read:

O you who have believed, eat from the good things which We have provided for you and be thankful to Allah if it is [indeed] Him that you worship. (Al-Baqarah 2:172)

Then eat of what Allah has provided for you [which is] lawful and good. And be thankful for the favor of Allah, if it is [indeed] Him that you worship. (An-Nahl 16:114)

And Allah has extracted you from the wombs of your mothers not knowing a thing, and He made for you hearing and vision and intellect that perhaps you would be thankful. (An-Nahl 16:78)

The Praiseworthy in Christianity

Though Jesus is taken as God in Christianity, we notice that he sang the praises of another god, which is called “Father” in Christianity. In the New Testament, we read:

At that time Jesus declared, “I thank you, Father, Lord of heaven and earth, that you have hidden these things from the wise and understanding and revealed them to little children (Matthew 11:25)

The New Testament also confirms that praise is due to God only and Jesus is just a servant. We read:

“I’m saying that Christ became a servant of those who are circumcised for the sake of God’s truth, in order to confirm the promises given to the ancestors, and so that the Gentiles could glorify God for his mercy. As it is written, Because of this I will confess you among the Gentiles, and I will sing praises to your name.” (Romans 15:8-9)

In more than one position in the New Testament, we observe that Jesus thanked God. For example, we read: And Jesus asked them, “How many loaves [of bread] do you have?” They replied, “Seven, and a few small fish.” He directed the crowd to sit down on the ground, and He took the seven loaves and the fish; and when He had given thanks, He broke them and started giving them to the disciples, and the disciples [gave them] to the people. (Matthew 15:34-36)

We also read: Now as they were eating Jesus took bread, and after blessing it, He broke it and gave it to the disciples, and said, “Take, eat; this is My body.” And when He had taken a cup and given thanks, He gave it to them, saying, “Drink from it, all of you (Matthew 26:26-27)

We further read: So they took away the stone. And Jesus raised His eyes [toward heaven] and said, “Father, I thank You that You have heard Me.” (John 11:41)