God (Allah) is the Most Just

One of the names and attributes of God is “the Most Just ”. The Lord of this universe should be “the Most Just”, and cannot be unjust or unfair. Otherwise, how come He orders justice and fairness though He Himself is unjust and unfair? 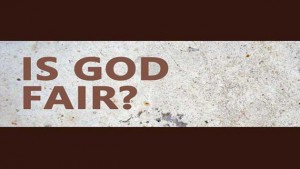 How can God be just towards us if He wronged His alleged son?

The Most Just in Islam

In the Qur’an, God (called “Allah” in Arabic) is described as “the Most Just” Who maintains His creation in justice. We read:

In the Qur’an, God confirms that He is not “unjust”. We read:

Whoever does righteousness – it is for his [own] soul; and whoever does evil [does so] against it. And your Lord is not ever unjust to [His] servants. (Fussilat 41:46)

The above verse indicates that a good deed is counted for man and an evil deed is counted against him. Thanks to God’s grace in Islam, the reward for the good deeds a person does may be shared by others, like this person’s offspring, in case they follow in the footsteps of their predecessor even if they do not do as many good deeds as their predecessor. There are several pieces of evidence for that in the Qur’an. For example, we read:

And those who believed and whose descendants followed them in faith – We will join with them their descendants, and We will not deprive them of anything of their deeds. Every person, for what he earned, is retained. (At-Tur 52:21)

Thanks to God’s justice, each person is held accountable only for the evil deeds he does. So, a person does not share the evil deeds of the others, nor does he have his evil deeds shared by others unless they collaborate on the same evil deeds. In the Qur’an, we read:

Indeed, We have sent you, [O Muhammad], with the truth as a bringer of good tidings and a warner, and you will not be asked about the companions of Hellfire. (Al-Baqarah 2:119)

About the Muslim community, we read:

That was a nation which has passed on. It will have [the consequence of] what it earned, and you will have what you have earned. And you will not be asked about what they used to do. (Al-Baqarah 2:134)

Say, “Is it other than Allah I should desire as a lord while He is the Lord of all things? And every soul earns not [blame] except against itself, and no bearer of burdens will bear the burden of another. Then to your Lord is your return, and He will inform you concerning that over which you used to differ.” (Al-An`am 6:164)

The Most Just in Christianity

The reason why salvation from sin through Jesus’ blood is deemed an unjust belief is that Jesus was a righteous man according to the New Testament. We read: Pilate said to them, “Then what shall I do with Jesus who is called Christ?” They all said to him, “Let Him be crucified!” The governor said, “Why, what evil has He done?” But they cried out all the more, “Let Him be crucified!” When Pilate saw that he could not prevail, but rather that unrest was beginning, he took water and washed his hands before the crowd, saying, “I am innocent of the blood of this righteous Man. See to it yourselves.” (Matthew 27:22-24)

The New Testament also tells us that Jesus was so peaceful that he would not return abuse with abuse. We read: “Then Jesus said to him, “Put your sword back in its place. For all those who take up the sword will perish by the sword. Do you think that I cannot now pray to My Father, and He will at once give Me more than twelve legions of angels? But how then would the Scriptures be fulfilled, that it must be so?” (Matthew 26:52-54)

The Bible informs us that Jesus foretold his bloodshed as a way out of sin. We read: As they were eating, Jesus took bread, blessed it and broke it, and gave it to the disciples and said, “Take and eat. This is My body.” Then He took the cup, and after He gave thanks, He gave it to them, saying, “Drink of it, all of you. For this is My blood of the new covenant, which is shed for many for the remission of sins. (Matthew 26:26-28)

If Jesus was really a righteous, innocent, peaceful man, is it just to let him get crucified and killed as atonement for the sins of evil, wicked people? Of course, no! If God accepts that, He will be unjust, but God cannot be unjust. If God agrees to do His alleged son an injustice, how can He be just towards people?

Indeed, the concept of redemption through Jesus’ blood is refuted by the Bible itself. In the Old Testament, we read: “The soul who sins shall die. The son shall not bear the punishment of the iniquity of the father, nor shall the father bear the punishment of the iniquity of the son. The righteousness of the righteous shall be upon himself, and the wickedness of the wicked shall be upon himself. But if the wicked turns from all his sins that he has committed, and keeps all My statutes, and does that which is lawful and right, he shall surely live. He shall not die.” (Ezekiel 18:20-21)