God (Allah) is the Light 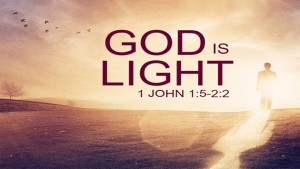 Since Jesus was a temporary light of the world, he cannot be God

The Light in Islam

In the Qur’an, God (called “Allah” in Arabic) is described as “the Light”. We read:

Allah is the Light of the heavens and the earth. The example of His light is like a niche within which is a lamp, the lamp is within glass, the glass as if it were a pearly [white] star lit from [the oil of] a blessed olive tree, neither of the east nor of the west, whose oil would almost glow even if untouched by fire. Light upon light. Allah guides to His light whom He wills. And Allah presents examples for the people, and Allah is Knowing of all things. (An-Nur 35:24)

Allah is the ally of those who believe. He brings them out from darknesses into the light. And those who disbelieve – their allies are Taghut. They take them out of the light into darknesses. Those are the companions of the Fire; they will abide eternally therein.(Al-Baqarah 2:257)

The Light in Christianity

Though Jesus is taken as God in Christianity, the Bible quotes Jesus as saying that he was not a permanent but temporary light. We read: “As long as I am in the world, I am the Light of the world.” (John 9:5)

We also read: So Jesus said to them, “The Light is among you [only] a little while longer. Walk while you have the Light [keep on living by it], so that darkness will not overtake you. He who walks in the darkness does not know where he is going [he is drifting aimlessly]. While you have the Light, believe and trust in the Light [have faith in it, hold on to it, rely on it], so that you may become sons of Light [being filled with Light as followers of God].” Jesus said these things, and then He left and hid Himself from them. (John 12:35-36)

The Bible confirms that it is God Who is the real, permanent “light”. We read: “This then is the message which we have heard of him, and declare unto you, that God is light, and in him is no darkness at all. If we say that we have fellowship with him, and walk in darkness, we lie, and do not the truth.” (1 John 1:5-6)