God (Allah) is the Judge 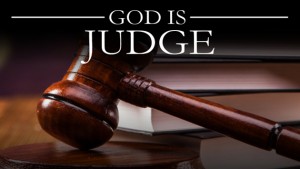 Since God is the true Judge, and Jesus’ judgment is derived from God’s, Jesus cannot be God

One of the names and attributes of God is “the Judge”, Who “judges”, “recompenses”, “rewards” and “punishes” all creatures.

There is no doubt that the Lord and Creator of this universe did not create it for nothing but for a certain objective. He will requite all of His creatures for their deeds, be they good or evil.

The Judge in Islam

The Qur’an often confirms that God (called “Allah” in Arabic) only is “the Judge” Who judges among His creatures. We read:

[Mention] when Allah said, “O Jesus, indeed I will take you and raise you to Myself and purify you from those who disbelieve and make those who follow you [in submission to Allah alone] superior to those who disbelieve until the Day of Resurrection. Then to Me is your return, and I will judge between you concerning that in which you used to differ. (Aal `Imran 3:55)

The Qur’an also emphasizes that God is the One Who requites people for their deeds. So He will reward whomever He likes and punish whomever he dislikes. For example, we read:

Paradise is not [obtained] by your wishful thinking nor by that of the People of the Scripture. Whoever does a wrong will be recompensed for it, and he will not find besides Allah a protector or a helper. And whoever does righteous deeds, whether male or female, while being a believer – those will enter Paradise and will not be wronged, [even as much as] the speck on a date seed. (An-Nisaa’ 4:123-124)

The Judge in Christianity

In the New Testament, the Bible tells us that God (called “Father” in Christianity) is the One Who rewards people for their deeds. Jesus is quoted as ascribing reward-giving to God rather than himself. We read:

“And whenever you are fasting, do not look gloomy like the hypocrites, for they put on a sad and dismal face [like actors, discoloring their faces with ashes or dirt] so that their fasting may be seen by men. I assure you and most solemnly say to you, they [already] have their reward in full. But when you fast, put oil on your head [as you normally would to groom your hair] and wash your face so that your fasting will not be noticed by people, but by your Father who is in secret; and your Father who sees [what is done] in secret will reward you. (Matthew 6:16-18)

The Bible also tells us that it is God Who judges, i.e. requites, people for their deeds. We read: “On that day when, as my gospel proclaims, God will judge the secrets [all the hidden thoughts and concealed sins] of men through Christ Jesus. (Romans 2:16)

We read: “The Father doesn’t judge anyone, but he has given all judgment to the Son” (John 5:22)

We also read: “Also he has given him authority to execute judgment, because he is the Son of Man.” (John 5:27)

Since God is the Judge, and Jesus’ judgment is derived from God’s according to the Bible, Jesus cannot be God for God is the true Judge Who may give judgment, and the one given judgment cannot be God.