God (Allah) is the Guide 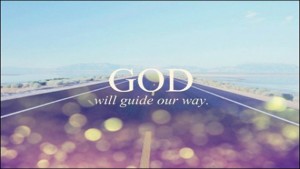 The Guide in Islam

In the Qur’an, God (called “Allah” in Arabic) is described as “the Guide”. For example, we read:

And so those who were given knowledge may know that it is the truth from your Lord and [therefore] believe in it, and their hearts humbly submit to it. And indeed is Allah the Guide of those who have believed to a straight path. (Al-Hajj 54:22)

And thus have We made for every prophet an enemy from among the criminals. But sufficient is your Lord as a guide and a helper. (Al-Furqan 52:31)

Since God is “the Guide”, guidance is deemed to be literally provided by Him only rather than any other one. We read:

And never will the Jews or the Christians approve of you until you follow their religion. Say, “Indeed, the guidance of Allah is the [only] guidance.” If you were to follow their desires after what has come to you of knowledge, you would have against Allah no protector or helper. Those to whom We have given the Book recite it with its true recital. They [are the ones who] believe in it. And whoever disbelieves in it – it is they who are the losers.(Al-Baqarah 2:120-121)

The Guide in Christianity

Though Jesus is taken as God in Christianity, we observe that the Bible quotes Jesus as ascribing guidance to God (called “Father” in Christianity) rather than himself. For example, in the New Testament, we read: “All that My Father gives Me will come to Me; and the one who comes to Me I will most certainly not cast out [I will never, never reject anyone who follows Me]. For I have come down from heaven, not to do My own will, but to do the will of Him who sent Me.” (John 6:37-38)

We also read: “No one can come to Me unless the Father who sent Me draws him [giving him the desire to come to Me]; and I will raise him up [from the dead] on the last day.” (John 6:44)

We further read: And He was saying, “This is the reason why I have told you that no one can come to Me unless it has been granted him [that is, unless he is enabled to do so] by the Father.” (John 6:65)

The New Testament also quotes Jesus as saying: “Father, I desire that they also, whom You have given to Me [as Your gift to Me], may be with Me where I am, so that they may see My glory which You have given Me, because You loved Me before the foundation of the world.” (John 17:24)

Finally, in the Bible, we read: “I have manifested Your name [and revealed Your very self, Your real self] to the people whom You have given Me out of the world; they were Yours and You gave them to Me, and they have kept and obeyed Your word. Now [at last]they know [with confident assurance] that all You have given Me is from You [it is really and truly Yours]. For the words which You gave Me I have given them; and they received and accepted them and truly understood [with confident assurance] that I came from You [from Your presence], and they believed [without any doubt] that You sent Me. I pray for them; I do not pray for the world, but for those You have given Me, because they belong to You; and all things that are Mine are Yours, and [all things that are] Yours are Mine; and I am glorified in them. I am no longer in the world; yet they are still in the world, and I am coming to You. Holy Father, keep them in Your name, the name which You have given Me, so that they may be one just as We are. While I was with them, I was keeping them in Your name which You have given Me; and I guarded them and protected them, and not one of them was lost except the son of destruction, so that the Scripture would be fulfilled.” (John 17:6-12)

Now, we may ask: if God is the Guide in Christianity in the sense that none can get guided except through the guidance provided by God, how can Jesus be God?

God is the Guide beside Whom there is no other Guide. The one who cannot guide others except through the power of someone else cannot be God.